We have new details about the upcoming Gammamon Dim Card and Jellymon Dim Card, releasing in preparation for their debut in Digimon Ghost Game.

We had previously gone through Angoromon’s evolution line up but now the other two have been revealed as well. 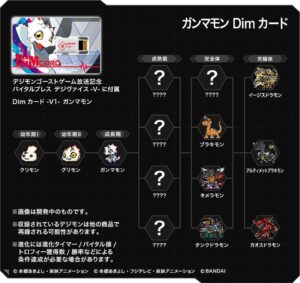 Being our main character’s Mon, Gammamon is suitably equipped with many dragons and dinosaur-like Digimon with highlights including Chimeramon and Chaosdramon. Of course, there are a lot of mystery Digimon, some of them likely being Gammamon’s anime evolutions. Jellymon seems like a more traditional deep saver Digimon with many classic marine mons it can evolve into. Jellymon herself bears a resemblance to Rananmon from Digimon Frontier so perhaps that Digimon will be one of the mystery champions? We’ll see soon enough.

I do find it interesting that these dims have all the mega stages revealed. It makes us wonder if the evolutions for Digimon Ghost Game will involve the Digimon evolution into various different Digimon. They experimented with this in the Adventure 2020 reboot and I can see bringing it back since it’s a big part of the Vital Bracelets that these anime will likely be trying to market.

The Gammamon Dim Card and Jellymon Dim Card will be available in October and December respectively. Jellymon’s will be released as part of a two-pack with Angoromon.

BanG Dream Roselia Movies To Be Viewable In Malaysia, Singapore