Death’s Gambit: Afterlife Switch Review – Dying is Only Half the Fun

When Death’s Gambit originally launched on Steam and PS4, it had a lot of issues like clunky controls and delayed inputs, which was a huge problem considering its difficulty. Thankfully, Afterlife fixes all of that, and Switch players could experience the game without its initial issues and problems. While I’ll be making many references to Dark Souls in this Switch review of Death’s Gambit: Afterlife, one way the game managed to separate itself from its inspiration is through its protagonist. Players assume the role of a named, non-silent protagonist called Sorun, who dies at the start of the game but strikes a deal with Death and has to do his bidding.

The game definitely feels a lot more story-heavy compared to Dark Souls, since we have a protagonist with his own backstory for once. The game still uses a lot of storytelling elements from its inspiration like mysterious NPCs who deliver exposition and lore-filled item descriptions. The biggest difference is that Sorun is an active participant in many of the game’s cutscenes. He’ll respond to NPCs and even we, the player, will read through multiple flashbacks of his past and such.

While the game’s story is somewhat of a generic dark fantasy story, I do find it very refreshing with how it’s presented. For example, when I was killed by the first boss and respawned, the boss was shocked to see me coming back for round 2, believing that I was genuinely dead. It’s moments like this that make the story really engaging and makes it stand out from Metroidvanias with silent protagonists like Hollow Knight and Dead Cells. Rather than losing all your Essence (Souls) when you die, you lose a Phoenix Plume (Estus Flask). Dying multiple times in various locations will not erase the previously lost Phoenix Plumes—you can just touch the places you died to retrieve them. Overall, the gameplay is a lot more forgiving than say, Dark Souls. Unlike that game, I never swore or banged my desk in frustration after losing a lot of progress when I died. The gameplay is basically a 2D version of Dark Souls. The Essence you earned is used to upgrade your stats and to wield certain equipment effectively, you will need sufficient stats like Strength or Finesse. There are many different kinds of weapons in the game, including magic.

Further adding depth to the gameplay are the classes. At the start of the game, you get to pick 1 of 7 classes, each with their different playstyles and skill trees. Fortunately, regardless of what class you pick, you can still wield any kind of weapon in the game, it’s just that the skills for certain classes will favour certain weapons more than others.

Overall, Death’s Gambit: Afterlife delivers a good balance of Soulslike and Metroidvania fun. While there is no fast travel, exploration isn’t too much of a hassle as the map updates whenever you visit a new area. There’s also the usual dopamine rush of unlocking new abilities and being able to explore previously inaccessible locations thanks to them. 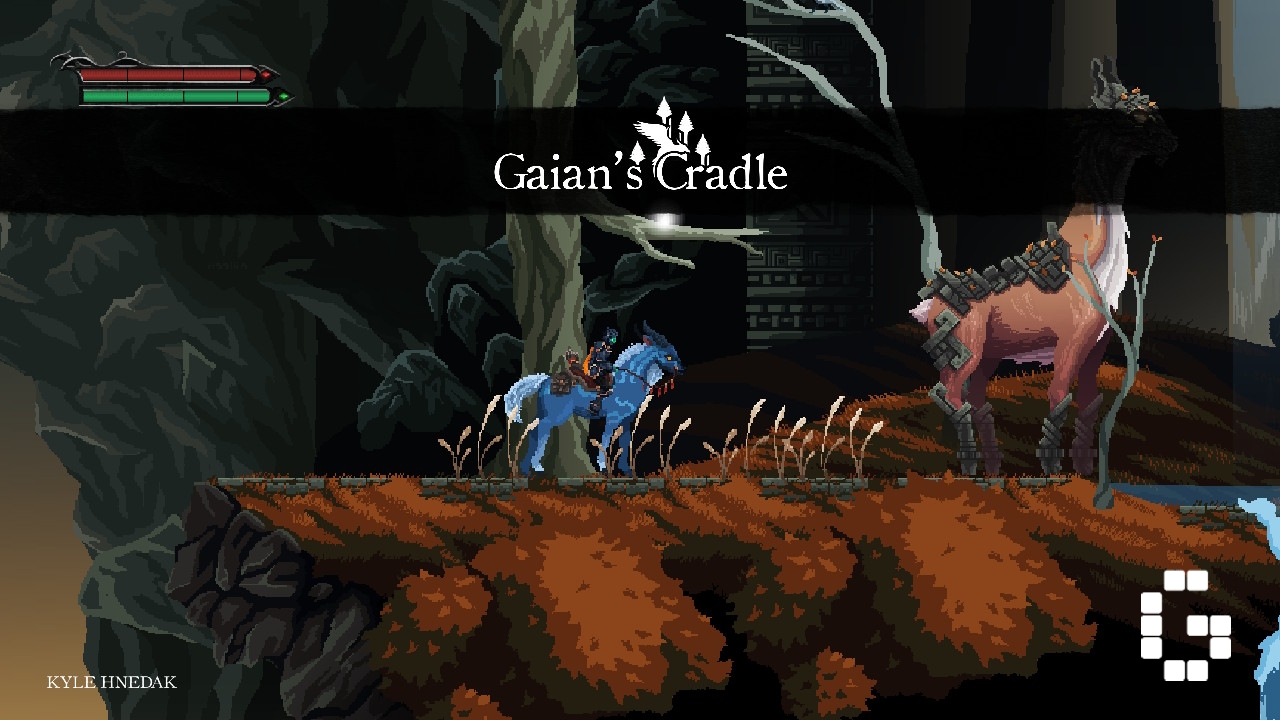 Just like Dead Cells and Blasphemous before it, Death’s Gambit: Afterlife uses a 2D pixel art style. Animations are smooth and precise. However, do note that some enemies are designed to blend in with background as an ambush of sorts, so you have to keep your eyes peeled. The game’s environments are pretty varied and unique amongst the different areas, which is great.

The biggest gripe I had when playing the game for this review was the size of the text. When playing the game handheld on the Switch, some of the text, especially at the bottom of the screen is extremely hard to see due to how tiny it is. The worst offender is the main menu. Just see for yourself how tiny the text looks when choosing your save file: As for the game’s audio, the music is nice and well composed. Death’s Gambit: Afterlife does have a rather warm atmosphere thanks to its music, compared to the bleakness of Blasphemous or Dark Souls. As a result, the game isn’t as dark, but this is purely preference and I feel that it does give a more approachable vibe to the game overall. Thanks to our friends at Epicsoft Asia, we received the physical Switch version of Death’s Gambit: Afterlife for this review! The physical version of the game comes with: Besides the difficult to read text, Death’s Gambit: Afterlife is a game without much flaws but is brimming with great design and gameplay choices. While it is a great game, as someone who’s played a lot of phenomenal Metroidvania titles like Hollow Knight, Ender Lilies and Celeste, I can’t help but feel that Death’s Gambit: Afterlife is missing something that could elevate it to that level.

Regardless, the story is good and the gameplay is enjoyable. If you’re looking for another great Metroidvania to fill your time with, look no further than Death’s Gambit: Afterlife.

You can check the game out on the eShop. For the physical version, you can visit the game’s page on Epicsoft Asia.