With the announcement of a new series, we take a look at what made the original Panty and Stocking so great.

As part of their 10 Year Anniversary & Announcement Panel at Anime Expo this weekend, Studio Trigger has announced that they are working on a new anime project for ‘Panty and Stocking With Garterbelt’ (PSG). This announcement took anime fans by surprise. Panty and Stocking was an IP owned by Gainax, Trigger’s predecessor, who hasn’t put out an anime in years.

Yet like an angel from heaven, a new anime dropped from the sky and I am so happy it did. PSG is one of the most bizarre and audacious anime I’ve ever watched and fully captured the spirit of Gainax, one of the most important anime studios of all time. While they’d produce a few more anime after PSG, it was the last project Gainax made that truly had that insane spirit, their final climax. So before this new anime drops, let’s have another at what made the original so great.

What is Panty and Stocking With Gaterbelt? They now live in Daten City with Gaterbelt, a black priest who totally doesn’t have a thing for bondage and little boys. Together they must work to defeat the many ghosts haunting the city. This in turn will give them heaven coins which will allow the sisters to get back into Paradise if they collect enough.

Along the way, they meet allies in the form of the awkward “geek boy” Brief Rock and Frankenstein Dog-thing Chuck as well as do battle with the demon sisters Scanty and Kneesocks.

And how do they beat these ghosts and demons? Well, they activate their angel forms doing a celestial pole dance which causes their, well, Panty and Stockings to turn into a gun and katanas. These cause the ghosts to turn into stop motion models, and they blow up. 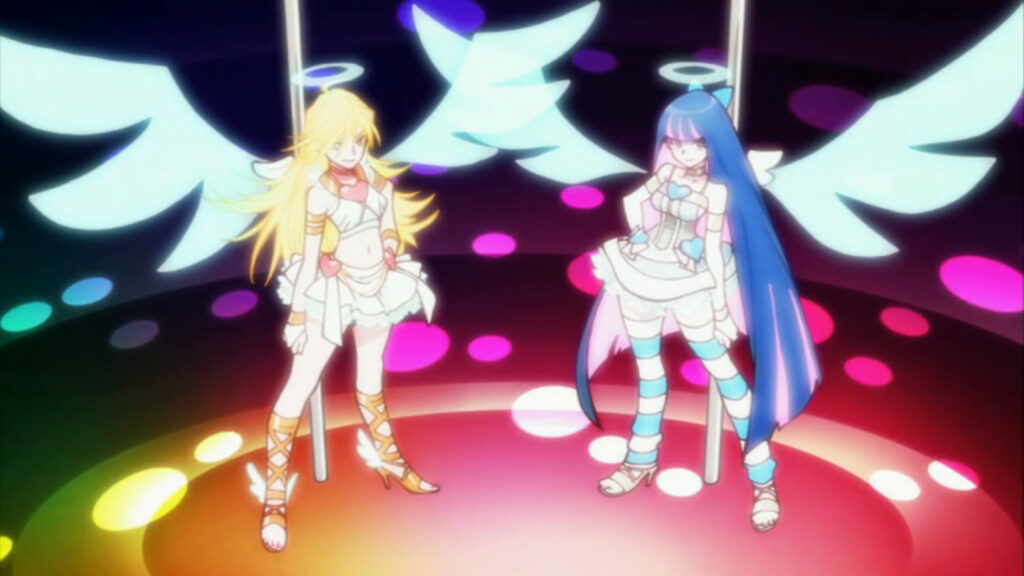 What Happens in Panty and Stocking With Garterbelt?

So PSG is a pretty weird anime. The first thing you’ll probably notice about the show is the fact that it looks less like an anime and more like a Saturday morning cartoon. The show is set out like one as well with two shorter stories in each 25-minute episode, complete with their own title cards (with references). Each story is completely episodic with little overarching continuity, unlike most anime. It’s certainly not for everyone. The show’s over-the-top nature and toilet humor can be outright disgusting at times, like the episode dedicated to Panty picking her nose and orgasming over it. But that’s also why people love it.

People loved just how daring it was with its experimental sex-positive nature, a unique blending of anime and western media, and the intense feeling that the animators are just going whatever the hell they wanted fully shone through.

It should also go without saying that the English dub of PSG is fantastic, one of the best of any anime and that’s in part due to the nature of the show. The English script is able to flavor the dialogue with even more innuendoes and jokes that just aren’t possible in Japanese, making the final product all the more hilarious.

The Last of Gainax Perhaps this should come as no surprise considering who made Panty and Stocking: Studio Gainax, the same group behind Neon Genesis Evangelion, FLCL, and Gurren Lagann, which was made by the same director Hiroyuki Imaishi. These shows of same the same DNA as PSG: experimental animation and storytelling alongside strange, often over-the-top visuals, particularly during the fight scenes.

They’re also known for their heavy focus on fanservice and the curse of writing extremely strong beginnings, only to finish with weak, rather abrupt endings. A curse that PSG, despite being mostly episodic still falls into.

Imaishi and Trigger even made a pilot for a spiritual successor of sorts to Panty and Stocking called ‘Sex and Violence With Machspeed’ which unfortunately was never turned into a full series.

A Fresh New Panty and Stocking

We don’t know a lot about the new Panty and Stocking With Garterbelt series. Imaishi is confirmed to be back in the director’s chair alongside Atsushi Nishigori as character designer.

The series is currently being referred to as “New Panty & Stocking” however we currently don’t know if it’ll be a second season or a reboot. Some concept art and a teaser trailer with the characters sticking their middle fingers up at the viewer were shown at Anime Expo but to my knowledge, they haven’t been posted online.

Regardless, seeing Panty and Stocking making their long-awaited return may be some of the best anime news I’ve heard all year and if social media is anything to by, I’m not the only one:

I can’t believe Panty and Stocking is back pic.twitter.com/EehFxIfO6U

Me hearing about the new Panty and Stocking project after almost 11 year of hearing nothing pic.twitter.com/EtqGdS8ytD

Panty and Stocking is back

Much like Drawn Together this show improved / ruined my sense of humor and brain chemistry pic.twitter.com/nwAdXSbU48

While the material may be considered too gross and risque for general audiences, it’s the type of anime we need to keep the medium creative, outrageous, and just downright fun.

Welcome back oh lovely angels, your trash talk and sex jokes have been sorely missed.