Update – 27/12/21: Aniplex has officially announced the new Mahoutsukai no Yoru movie. They have launched the official website and revealed a teaser trailer for the movie featuring main characters Aoko Aozaki and Alice Kunoji.

The movie will be animated by Studio Ufotable, who has previously worked on The Fate/Stay Night and Fate/Zero anime as well as Demon Slayer. There is no confirmation of the film’s release period.

This was confirmed by Twitter user Kars who found a website for a Mahoutsukai no Yoru movie that linked to Aniplex’s redirection page. Aniplex has worked with Type-Moon on previous adaptions of their works including Fate/Grand Order and the Tsukihime Remake. The website has since been taken down.

Mahoutsukai no Yoru will be receiving a movie adaptation by Aniplex.https://t.co/iwD2OUNbYY pic.twitter.com/djnngHUxrT

Mahoutsukai no Yoru or Mahoyo for short, translated as ‘Witch on The Holy Night’ was a visual novel released by Type-Moon in 2012 for PC, written by Kinoko Nasu and with art by Takashi Takeuchi, the same duo that would be on to make Tsukihime and Fate/Stay Night. The visual novel is based on an earlier light novel that two wrote. It is also supposed to be getting two sequels VNs however neither has been officially announced. 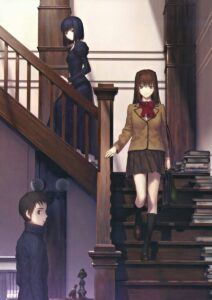 The visual novel centers around Aoko Aozaki, heir to the Aozaki mage clan, who previously appeared as a minor character in Tsukihime. Mahoyo takes place before the events of Tsukihime, showing Aoko’s life as a high schooler living in the 1980s. She moves into her family mansion in Misaki Town to learn magic from fellow mage Alice Kunoji. Soon enough a boy named Sujuro Shizuki also ends up living with them, who may or may not be a deadly assassin.

The three of them must defend Misaki town and the Aozaki estate as it comes under attack by an unknown force.

We currently do not know who will be animating the movie.

While there is no confirmation on when the official announcement may be, the best possibility will be on December 31st as Type-Moon tends to hold a live stream on New Year’s Eve announcing content for the coming year.