Sonic The Hedgehog 2 Review: Great For Fans, Ok For Everyone Else

After watching Sonic 2, I was brought back to something that happened a couple of years ago.

When I watched Pokémon Detective Pikachu, with all its references to the games and pokemon brought to life, I thought it was one of the best things I’d seen all year. A friend of mine, who wasn’t into Pokemon thought it was a fun kids’ movie, but ultimately just ok.

That’s pretty much how I feel about Sonic The Hedgehog 2, if you like the games, you’ll probably love the movie, for everyone else, it’s a fun kids’ movie that is ultimately just ok. Sonic is trying to enjoy a weekend alone since his surrogate human parents (still kinda weird) are out of town. Unfortunately, Dr. Eggman is back and he’s tricked an Echidna named Knuckles into helping him find the Chaos Emeralds and defeating his arch-nemesis. Thankfully Sonic is rescued by a fox named Tails and the race is on to get to the emerald.

The movie, perhaps fittingly, is very fast-paced and straightforward with the plot. Tails more or less exposits the paragraph written above early in the movie like he’s reading from the game’s instruction manual. The movie doesn’t really have any big surprises as pretty much every story beat you think is going to happen will happen, the road trip to get a McGuffin, losing before the third act, the heroes coming together for the finale. This isn’t necessarily a bad thing mind you.

Sonic isn’t trying for fine art, it’s a family adventure movie and it succeeds at doing so, but I couldn’t help but feel I’ve seen this movie at least three times before and it doesn’t really do anything to wow me the fourth time. That being said, if you’re a fan of the series, it’ll likely do more for you. Sonic 2 goes much farther than the first film in introducing the lore of the franchise with several callbacks that are sure to have fans screaming in the seats. Various factions from the games, powerups from the games, enemies from the game, and that mid-credit scene. I’ve played enough Sonic to know where they come from but I can imagine for a dedicated fan seeing these in a big-budget film must have been a moment of pure celebration.

But if you’re not a fan, it’s still cool but I don’t think it will have the same wow factor. I felt the film relied a little too much on viewers knowing who or what these things are from the source material in order to get you hyped for them. By comparison, I think the first Sonic movie did a better job at making people feel excited for Sonic and Eggman and showing why they’re such cool characters beyond “they’re from the game”.

That being said, the film certainly does make the most out of these game concepts. The action scenes in the movie are great, creating that sense of high octane blast processing you’d expect from Sonic. The ending, in particular, throws out any level of groundedness the movie was going for by setting it in the human world, embracing the insanity of the games. It’s all the better for it. Of course, the big reason people are showing up to see this film is to see the live-action debut of Tails and Knuckles and to see them interact with Sonic. Much like the first film, the animation on these three is great. Despite their anthropomorphized designs, they don’t feel out of place in the live-action setting and are capable of showing a wide range of emotions. The CGI here is astounding and deserves a lot of praise.

Sonic (Ben Schwartz) undergoes a very typical hero’s journey, learning to be responsible and take care of the people around him. He’s cute and it’s done well enough but once again, it’s just not anything that hasn’t been seen before.

Tails (Colleen O’Shaughnessey) was also a mixed bag for me. He had a couple of fun moments but for the most part, he doesn’t do a lot throughout the movie beyond setting up the plot and occasionally shooting an Eggbot. The crux of the film is that he’s Sonic’s first friend and while I do think he helps with Sonic’s development I wouldn’t say he got much of his own.

Finally, there are Knuckles, voiced by Idris Elba and he’s the best character in the movie. He’s honorable, but also very naive, punching his way into problems without thinking things through. A real knucklehead I suppose. There’s something enduring about just how dense yet well-meaning he is and I really liked his rivalry with Sonic. He’s also part of some of the funniest jokes in the movie. It definitely helps that he’s extremely well-acted with Elba giving him a really distinct and imposing voice.

The human characters in Sonic 2 all do a decent job with a couple of drawbacks. Sonic’s surrogate parents Tom (James Marsden) and Maddie (Tika Sumpter) both do well with what they’re given however I had some issues with how they interacted with Sonic and friends. The way they spoke to Sonic didn’t feel real, it felt like the way the hosts of Sesame Street would talk to the puppets like you can tell the animated creatures they’re speaking to aren’t actually there and the actors are doing their best to react to what emotions they think the cartoons are making.

The big exception to this is Dr. Eggman played by Jim Carrey. Yes, he’s basically just playing The Riddler again, but it works for the movie. Carrey is so animated that he feels completely in synch with the more fantastical side of the movie and fits in perfectly alongside a talking blue hedgehog. Not all of his jokes land, but there were definitely a few that had me legitimately laughing.

There is also a strange scene in the middle of the film that is entirely devoted to Maddie’s sister Rachel (Natasha Rothwell). On one hand, it was hilarious, on the other, it goes on for so long yet has so little to do with Sonic, which makes it feel really out of place. Like I said at the start, Sonic The Hedgehog 2 is a decent family film. Good action, decent comedy, good wholesome message about finding family and friends but it won’t do much for you beyond that. Its greatest crime is feeling a little redundant, although not to the point that it was overly boring or repetitive.

The ways the film tries to elevate itself is through the fanservice and implementation of lore from the games which will make the film stand out more for Sonic fans but if you don’t know much about the Hedgehog, it won’t do as much for you.

I feel for the next film should keep adding aspects from the game but not rely on people knowing the source material as much. A strong point for something like say, the MCU is that they do a good job at not only bringing in these obscure characters to the big screen but showing people who don’t know them what they’re so cool.

The first Sonic film was a little better in that regard however Sonic 2 is still a solid adventure that I feel that most audiences can sit down and have fun with, even if it won’t be as mind-blowing for some people as it will for others. 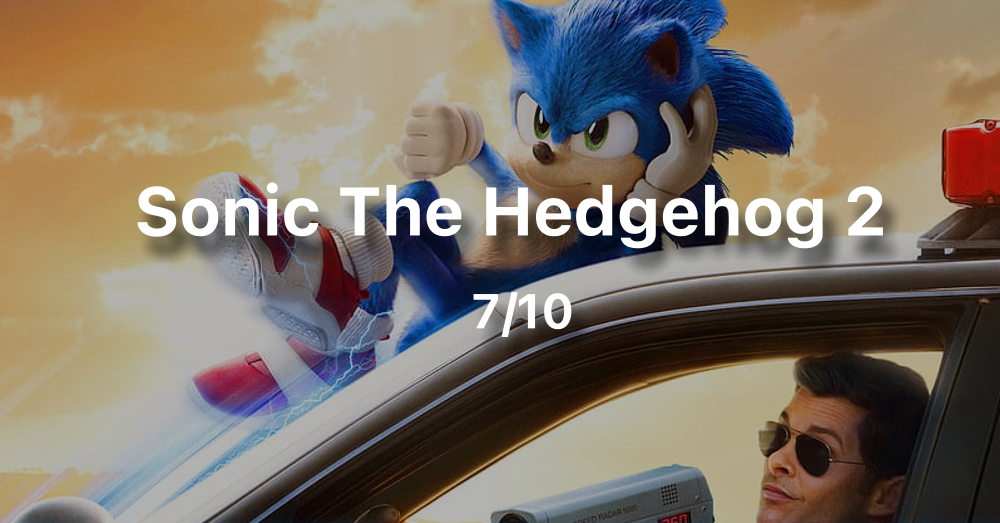 Elden Ring Fans Are Honouring Let Me Solo Her, The Legendary Player Carrying Them Through The Hardest Boss