ROCKMAN X DiVE had just announced a series of summer limited events to cool you down from the scorching summer heat! After August 6 (UTC +8), the whole new event “Summer Vacation for Lord of Snowy Plain” will be officially held.

Besides the brand new stages under the concept of a water park, Alia, Layer, Roll and BOSS “Summer Penguin” will all change to a new summer look that will definitely catch the attention of the players!

On top of that, after the maintenance for the game,there will be new BOSS ” Toxic Seahorse” and “Bospider” in BOSS challenge stage and even new chip of “Toxic Seahorse”.

As the upper limit of account level open to lv. 100, new contents in “Story” and “Co-op” will be published as well.

Challenge the “Summer Penguin” in Water Park as well as having a splashing battle with three swimsuit hotties!

In order to cool players down in this hot summer heat, ROCKMAN X DiVE will be featuring new summer skins for different characters. Players will go on an adventure in the new “Water Park” map; after passing through waterslides, pirate ships, Ferris wheels and other amusement rides, have a water battle to cool off with the Summer penguin with a brand new watermelon costume.

Players will not only get the rewards throughout the event but also acquire their hands on the “Swimsuit Alia” skin! 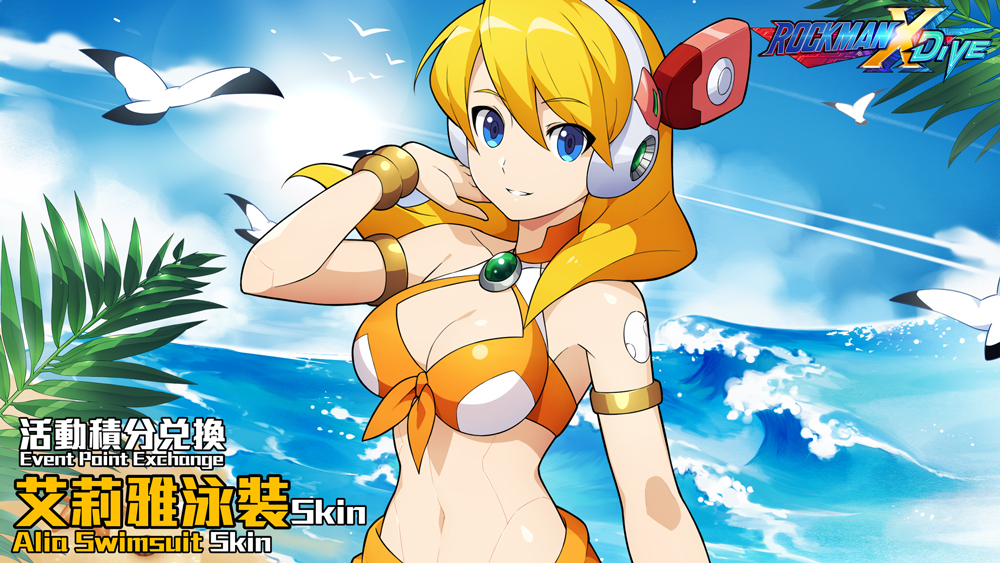 Besides Alia, the new limited offer characters “Swimsuit Layer” and “Swimsuit Roll” will be making their debut in this summer event. Swimsuit Layer is practical in battle with her abilities. Swimsuit Layer will sprint forward and slash after using the skill “F-Splasher”; and the attack power and range will be raised up 20% when the fourth time that the skill been used.

Another skill “Water Melon Slice” will cause the targets unable to move while being hit; moreover, if the passive skill unlocked, “Swimsuit Layer” will also get the ability to increase the critical strike rate by using weapons or skills. Although Swimsuit Roll does not look aggressive at all, her practical skills can not to be underestimated.
“Swim Ring Hurl” is to cast out her swim ring for scrolling back and forth as its name implies; and all enemies encountered along the way will be hurt.
The second skill ”Water Shield” will not only absorb but deal damage to the enemies! You will see “Swimsuit
Roll” wipe out all the enemies in the stage by using “Water Shield” after the passive skill with
speed up effect being unlocked.
A more detailed showcase of the character’s skill can be found here:
– New BOSS Brings Unprecedented Challenge –
As the account level being opened to 100, the new map “Volcano” which comes from “Mega Man X4” will also be unlocked in “Story”. And for those who like “Co-op”, there will be another new stage “Bio Laboratory” for you to take a good trip in!
Furthermore, there will be two new BOSS “Toxic Seahorse” and “Bospider” appear in Challenge mode. “Toxic Seahorse” is a Reploid composed of liquid that his spouted acid is elastic and will greatly increase the difficulty of dodge. In addition, he will turn into a liquid state and sneak into the floor then wait for an opportunity to attack the enemy.
“Bospider” on the other hand will move up and down along the track, and will summon little spiders to assist in the attack. He will not be able to attack while climbing on the track; and when he falls down to the ground with his armor dropped, players can be fully fired and give him a fatal blow!
With the opening of the new BOSS, the new chip “Toxic Seahorse Chip” is also released. The ” Toxic Seahorse Chip” can be equipped on machine gun type weapons. As long as the enemies are hit, they will be caused poisoning effect.
For more information regarding this summer event as well as future updates, players can check out their official Twitter page!
Give us some support by subscribing to our Youtube Channel !
Tags: NewsRockman X DiveSummer Event
Previous Post