Does the MSI Katana GF66 bring honour to its namesake as we put it to the test for this review? Find out what we have to say!

Featuring up to 11th Gen Intel Core i7 and the respectable Nvidia GeForce RTX 3060, it has the tools to perform as a gaming laptop. To determine if the Katana GF66 could wield these tools to a remarkable level, MSI sent us one of their review units. Thanks MSI Malaysia for the kind gesture.

With that out of the way, let us cut right into this review of the MSI Katana GF66! MSI chose the name, Katana, for this machine as they seek to emulate the qualities of the iconic Japanese sword. To achieve that end, MSI collaborated with renowned illustrator Tsuyoshi Nagano, whose art would go on to influence the look of Koei’s Dynasty Warriors franchise.

For the Katana GF66, Nagano designed the laptop’s default wallpaper, which is undoubtedly cool. The two samurai that appear on screen as you start the computer up for the first time oozes in style. The black samurai even has a custom-designed MSI dragon logo etched into his armour. Nagano’s work really helped add personality to the Katana GF66. I cannot recall the last time I saw a laptop with a default desktop wallpaper that looked this stylish. As for the body of the laptop itself, it is sleek and solid. It weighs 2.25 kg and is 25 mm thick, which puts it right around the ballpark for what you would expect of a gaming laptop. I like its minimalistic design with its fully black shell. Like practically all of MSI’s gaming laptops, the signature dragon logo on the topside oozes in confidence, sort of like how sports cars have iconic logos. I can respect MSI for only having red backlight for its keyboard. Red and black is a visually appealing combination and looks-wise, it gets the job done. While it does not have RGB support, I never liked having rainbows dancing around my keys in the first place.

As for the keys themselves, they are of the clicky type. Personally, I had no problems typing or gaming with the keys, but do note that the experience may differ depending on the kind of keyboard you prefer. I minor gripe that I did have is that its keys do feel a little too close to one another, but after a while, you would get used to it.

If for some reason you cannot use a mouse, the MSI Katana GF66 has got your back with its trackpad, which I also took my time to review. It does need a little bit of effort to click, but its gliding and tracking are top-notch. With its 15.6-inch 1080p display panel, the Katana GF66 still delivers. Even though it is not a 1440p display, serious gamers will be delighted to know that it has 144 Hz refresh rate. Visuals are smooth and detailed as you might expect, which allows it to run competitive games comfortably.

Overall, the screen captures the contrast of colours nicely, with a contrast level of 1274 : 1. Thanks to that, the screen also differentiates the depth between subjects on-screen rather well. 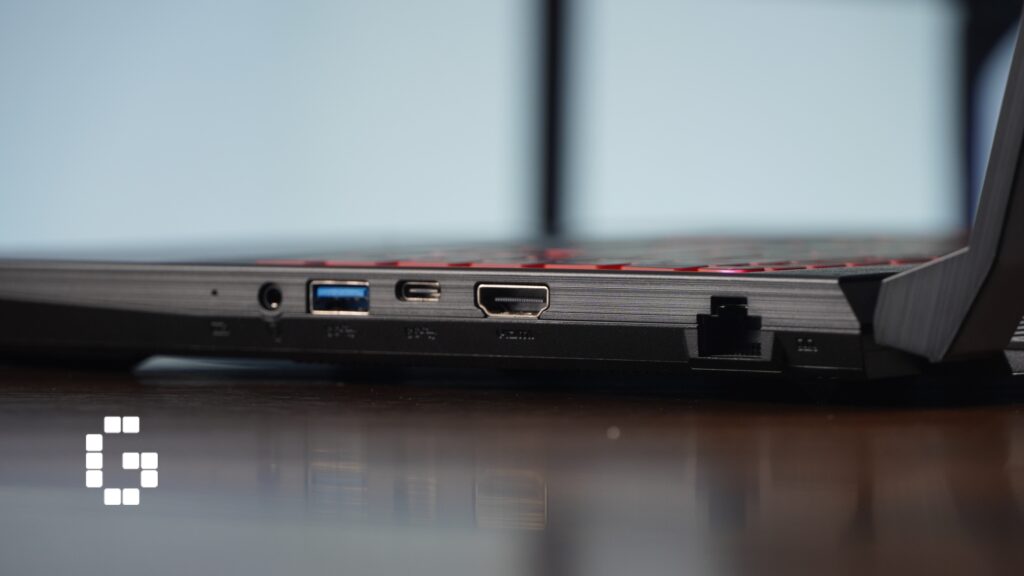 The MSI Katana GF66 has a fair selection of ports, with 1 Type-C USB port, 3 Type-A USB ports, 1 RJ45 port, a HDMI port and an audio jack. Personally, I wished that it will pack an extra Type-C port, but as this is a gaming laptop and not a work laptop, that is still fine. Besides these ports, the Katana GF66 also has a built-in webcam above the display which does a decent job capturing your image in HD. As for its connectivity, the laptop sports dual-band Wi-Fi 6, Gigabit Ethernet and Bluetooth 5.0. Rather standard stuff for a gaming laptop, as mentioned previously. These features should suffice for most gamers’ day-to-day activities. As for its battery, I do feel that the MSI Katana GF66 could have been better. Browsing, watching videos and general use has the battery lasting between 3 to 5 hours. However, if you are gaming intensively on battery power alone, expect the laptop to last you just over an hour.

On the plus side, the charger charges quickly. You can fully charge the laptop in over an hour. As such, gamers will likely use the laptop plugged in most of the time.

The Sound of a Sword Slice

The laptop has accurate mids and highs, but its bass is rather lacking for some reason. It is still great overall and will serve your gaming needs comfortably, but for those who prefer to watch films or listen to music, the speakers may be a bit of a letdown.

Regardless, this issue could easily be resolved with a good gaming headset. Ultimately, quality headphones or a headset will always beat the audio quality of laptop speakers anyway. Fun fact: swords are forged in high heat to form their shape before being cooled rapidly to harden. The MSI Katana GF66’s thermals cool the machine down incredibly fast, just like the forging process. On top of its Cooler Boost 5 technology and its heat pipes, the honeycomb pattern at the bottom of the laptop really helps to take heat away from the machine quickly and stably.

The only area of the laptop which can get rather hot is the region right above the keyboard. Also, like most of MSI’s other gaming laptops, the Katana GF66’s fans can get rather noisy, especially in Turbo mode. The best way to determine if the laptop is as great as its inspiration is to run video games on it. The games I played on the MSI Katana GF66 for this review are PUBG, Valorant and Watchdogs Legion. The Katana makes good use of its RTX 3060, being able to run PUBG at 70 FPS and Valorant at nearly 130 FPS with great consistency. For your multiplayer and more competitive games where the frame rate is a factor, the Katana GF66 certainly delivers. For Watchdogs Legion, I played the Bloodline DLC specifically. Usually, this game tends to cause many gaming laptops to lag especially on high graphics settings. The Katana GF66 fared a lot better than most gaming laptops.

Initially, there was a bit of lagging, but after the game ran for a minute or so, it became a lot smoother. Once in a while, it does lag, dropping the frame rate to as low as 10. However, on average, I was able to stay above 36 FPS and higher for the most part, with some parts of the map maintaining 50 – 60 FPS.

The Katana GF66 cuts through the benchmark tests with panache. On 3D Mark, it was even able to hit a score of 98.7%! Here are the results from various benchmarks: Overall, the MSI Katana GF66 was able to do its namesake justice. It looks simple on the outside, but inside, it is packing great hardware that operates beautifully.

Above all else, it never crashed regardless of whatever punishment I threw at it. At most, there is a bit of lagging depending on the game or software and the fan can get a bit loud. It works like a charm. The only other problem is the speakers, but this becomes a non-issue with a good quality headset.

The MSI Katana GF66 is currently priced at RM4,299. Be sure to visit the product page to learn more or get one yourself. It even comes with its own laptop bag! Once more, thanks to MSI Malaysia for the Katana GF66 review unit.