As with any expansion, Monster Hunter Rise Sunbreak introduces two new maps, complete with their own subcamp to allow you to more strategically plan your hunts.

Though there aren’t many new locales, you’ll want to make sure to get every subcamp in Monster Hunter Rise Sunbreak, as well as the new Buddy Recons. Positioning is key, after all, and being able to zip around the map can make a huge difference if you’re competing to clear a hunt as efficiently as possible or even if you wanted better access to mining materials.

It should be noted that Buddy Recon is an entirely new mechanic for Sunbreak- once you find the Buddy Recon, you’ll want to assign a spare buddy to the Buddy Recon to be able to fast travel there once per hunt. It’s a nice balance between the versatility of a subcamp and its accessibility- since you can only go once, you won’t want to keep falling back there.

Admittedly, the Jungle can be a bit of a hassle in Monster Hunter Rise Sunbreak, due to its extreme verticality. The 2d map can easily get you turned around, as you accidentally take wrong turns and end up underground or worse, accidentally leap off a cliff and have to restart from scratch. To get to the Jungle subcamp, you’ll want to travel to the north face of the central rock formation- on the map, you’d see it as north of area 8.

From there, simply scale the cliff face (you’ll want to use your Palamute for an extra jump to get enough air to climb the structure). Simply walk through the tunnel and you’ll find the Subcamp location for the Jungle locale. As with all subcamps, don’t forget to complete the associated subquest to unlock the subcamp for future use.

The Jungle locale has two Buddy Recons, both easily accessible from the starting camp. The first one requires you to climb the vines right behind the camp/ You’re heading for the southwest peak of the rock formation, which you’ll reach by basically running in a straight line and scaling every wall you find. It’s right next to the Relic Record in the hollowed out tree, just off to the right. The second Buddy Recon for the area is a lot simpler to get to- simply turn right if you’re facing the main tent at camp and then ride until you reach this eastern rock formation on the island.  The buddy recon is overlooking the big clearing, so it should be no problem finding it.

The main problem with Buddy Recons is that they’re a lot less obvious than subcamps- so you’ll want to really be paying attention for the prompt to set them up there. Thankfully, Felyne Chief Kogarashi will bring it up if you’re near one too. The Citadel is a much more convoluted map, with many narrow pathways that might make it easy to get lost. Just like its Jungle counterpart, you’ll want to make good use of your platforming skills to get to all these locations. Unlike the more straightforward Jungle, the subcamp in the Citadel in Monster Hunter Rise Sunbreak is actually pretty easy to miss. You’ll want to target the outcropping to the north east of the map, scaling the wall and running along the path. 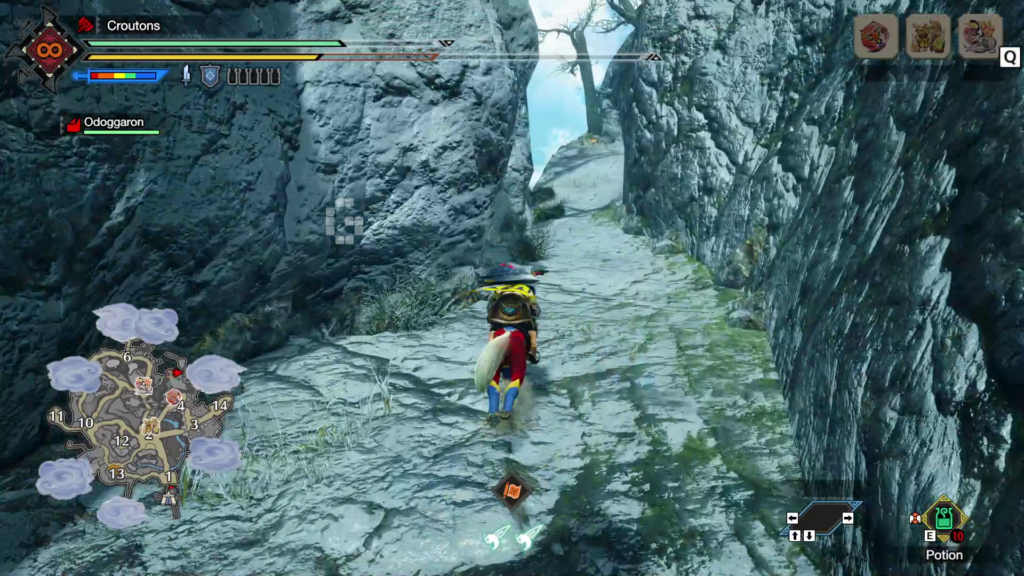 It should be noted that once you see the ramp, you’ll want to keep left- the entrance to the subcamp will be a narrow, missable pathway. It’s easily one of the trickiest subcamps to get to, since the pathway is entirely obscured if you’re not paying attention. The first Buddy Recon in the citadel is a great point thanks to its very central location- you can find it in the north west of the central rock formations, just at the edge of the grassy biome. The second Buddy Recon is a lot more tricky to get to. From our experience, the most straightforward one will be a bit of a test of your wirebug control- head for the rock formations in zone 6, then climb to the top, coming from the east. From there, you’ll want to launch yourself over the ice crystals and dash across the gap to get to the Buddy Recon spot. While it may be frustrating, once you set up the Buddy Recon at least you won’t have to worry about doing it again since you’ll be able to warp there.

MSI Malaysia gets you well-equipped for Back to School 2022

MSI Malaysia gets you well-equipped for Back to School 2022