Since the first beta, Ramlethal has been a force of terror in Guilty Gear Strive. Despite the game’s more toned-down mechanics, Ramlethal seemingly has it all- great zoning tools, deadly setups and a get-out-of-jail free card in her amazing reversal super.

While the quality of your Ramlethal opponent will differ, there’s a lot of things that will carry over. Ramlethal isn’t particularly busted as much as she is a character that even opponents will have to learn when dealing with her. Here’s a universal guide to dealing with Ramlethal in Guilty Gear Strive (As of the current version).

Dealing With Her Exploding Swords So, arguably the most annoying thing about Ramlethal is her swords. These are powerful, fast projectiles that come out almost instantly, exploding in the corner. This is actually a step up from her playstyle in Xrd, where the swords acted as setplay tools.

The biggest source of salt I’ve seen on the internet is from people who forget to block the explosion from her swords. It feels really dirty, because after successfully blocking the initial projectile, the temptation is to hit buttons to get back in and punish her. However the explosion goes off almost right after you recover from blockstun, so if you’re not anticipating the explosion be prepared to get knocked back.

Another important addendum is to practice your Burst timing. Again, it’s very tempting to burst after the first sword hit, but just like in Xrd Ramlethal mains are almost legally required to learn to burst bait to keep you in the corner for maximum damage.

From my own experience trying to burst too early only gets you juggled by the two sword explosions, catching you in shame.

Some of the characters in Guilty Gear Strive have really good fireballs, so it’s easy to assume that you can just out-zone Ram. Stop. While I haven’t tried it with the entire roster, a lot of characters whose fireballs went through other projectiles such as Leo cannot break through Ram’s swords, and you’re better off just trying to defend against them to save yourself the heartbreak.

Take Back The Mid Screen 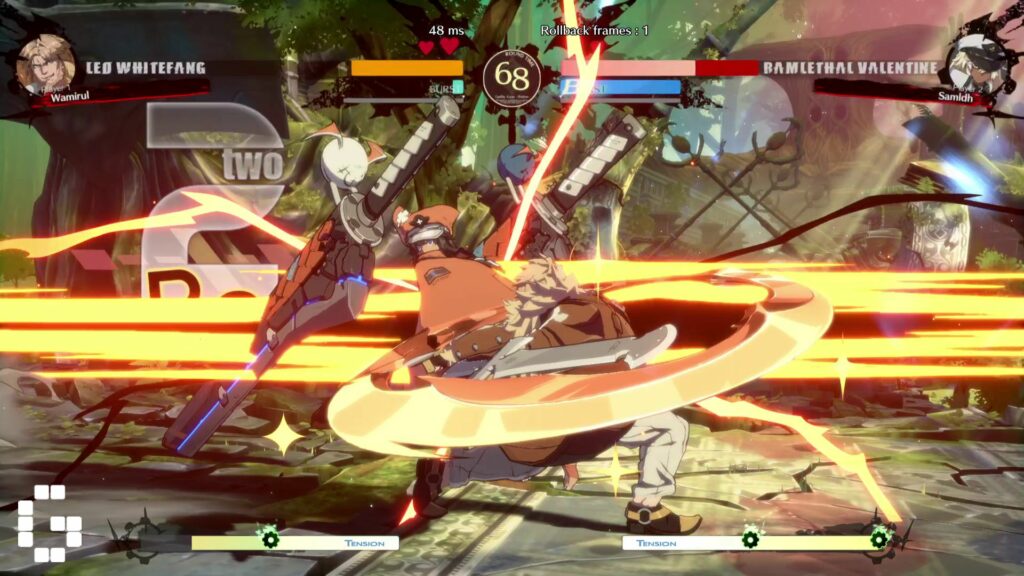 So, it seems obvious in hindsight, but Ramlethal is terrifying in the corner in Guilty Gear Strive. Therefore, the best solution is to just not be there. Airdash, burst, Yellow Roman Cancel (hit 3 buttons after blocking) if you must, but just deny her the ability to box you in. You’ll realize her swords are way less trouble when they can’t explode, and if your opponent has been using them as a crutch Ram’s kit is much weaker without them.

The other problem with Ramlethal is that she’s got really good regular moves, too. Particularly her jumping Slash, which is a great tool for jump-ins. Thankfully, after the first beta every character’s forwards punch (6P) was drastically buffed as a universal anti-air, with a wide hitbox as well as head-invulnerability. I should stress, while characters may have better DP options, 6P seems to be the safest move to react to her jump ins thanks to its much faster start-up. Moves like Leo’s DP can still be reacted to, and just getting her on the back foot is more important.

It’s not fun, but you’ll need to resort to fundamentals. Practice good neutral, keeping her range in mind and trying to win the rock-paper-scissors where you can to get your hits in.

Ramlethal has two really great supers in Guilty Gear Strive, Mortobato and Calvados. They both have their uses, and can also be really frustrating to deal with if you’re not prepared. Calvados is arguably the less stressful of the two, though it shouldn’t be underestimated just because of that. The super gives Ram both her swords back, so expect to see players use it when they’ve lost their swords. Aside from that it’s a big horizontal beam, so remember to be generous with your Tension and use Faultless defense (two buttons while blocking) if you don’t want to be chipped out.

Heck, if you get caught with your pants down don’t be afraid to spend the extra 50 Tension on a roman cancel to get you blocking too, because eating one of these beams hurts.

On the plus side, if you’re in range or get lucky enough to get over her as the beam comes out, Ramlethal is totally vulnerable and can be grabbed out of it.

On the other hand, Mortobato leaves way less openings. This reversal super is the bane of my existence right now with its fast invulnerable startup, and wide hitbox that hits both in front of and behind Ramlethal.

It’s entirely dependent on how many swords Ramlethal has, so be sure to watch for it. That being said even with no swords the range is still wider than you’d think, so don’t think just because your opponent’s open that you’re safe from a panic Mortobato.

Like any DP, Mortobato is punishable on block. The catch, however, is that the recovery for the move is really short, so unless you’re blocking it point-blank you’ll usually never have an opening to punish it.

The best suggestion I have is to just embrace the gorilla in you. Many characters have their own invincible-startup supers, such as Leo and Sol, because after the first eruption Ram will be open to damage.

Of course, both supers need some homework to deal with. You have to keep an eye on your opponent’s tension gauge, and assume any time Ramlethal has 50 tension you’re going to either eat a beam or a DP. Of course, knowing all this doesn’t do jack if you’re not willing to get good at the game. No one likes to hear it but sometimes the path to beating Ramlethal involves losing to her. A lot. It’s important to keep a positive mindset and realize you’ll need to grind it out.

Guilty Gear Strive’s mission mode and training modes have plenty of options to help you practice the Ramlethal match-up, as well as learn about your own main. On top of that the community has a lot of tools as well, such as Dustloop for those of you more technically inclined and understand things like frame data.

Or, you know. Just become a Ram main yourself. There’s a reason she’s so popular, after all.

And away we go – Alchemy Stars launch first impressions

And away we go - Alchemy Stars launch first impressions