The lady you call when you've spent too much on gacha

Cookie Run Kingdom’s latest update will be coming out tomorrow and will introduce players to Financier Cookie alongside new modes and systems changes.

The new update will drop tomorrow on the 7th of July 2022. 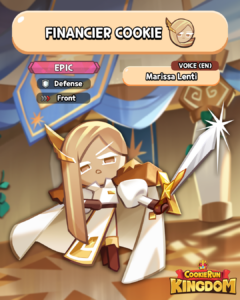 Financier Cookie is an epic defense cookie that stands in the front row. She is voiced in the English language dub by Marissa Lenti who has previously played minor roles in Attack on Titan, Horimiya, and Pokemon. In the Japanese dub, she is voiced by Ryoka Yuzuki, most well known for playing Arcueid Brunestud and Neco Arc in Tsukihime, and Satsuki Kiryuin in Kill la Kill.

Here are Financier Cookie’s voices in the other language versions, which now include German and French languages:

There are also a number of new events coming to the game that will further expand the game’s modes and leveling system:

Unfortunately, these updates have not all been well received by fans, with there being a lot of backlash towards the magic candy and ascension updates in particular. You can find out more about the controversy here.