With the Summer Season for anime about to end, and if you’re like me, you’ll definitely be looking forward for the next upcoming Fall season 2020 list to fill up the empty void that is left in you, after watching your current favorites ending. (Especially if you’re a Yui fan) According to livechart, the fall season will be packed with a bunch of new anime along with sequels. While we won’t be going over all of the anime on the list, we’ll only be covering the new entries. We’ll be skipping over sequels since people who enjoy the series would definitely continue watching the sequels.

What will we be watching? A boy fights… for “the right death.”

Hardship, regret, shame: the negative feelings that humans feel become Curses that lurk in our everyday lives. The Curses run rampant throughout the world, capable of leading people to terrible misfortune and even death. What’s more, the Curses can only be exorcised by another Curse.

Itadori Yuji is a boy with tremendous physical strength, though he lives a completely ordinary high school life. One day, to save a friend who has been attacked by Curses, he eats the finger of the Double-Faced Specter, taking the Curse into his own soul. From then on, he shares one body with the Double-Faced Specter. Guided by the most powerful of sorcerers, Gojo Satoru, Itadori is admitted to the Tokyo Metropolitan Technical High School of Sorcery, an organization that fights the Curses… and thus begins the heroic tale of a boy who became a Curse to exorcise a Curse, a life from which he could never turn back.

I have a feeling that this series would be the most hype show of the season, if done right of course. The premise of the show is really unique just from the synopsis and the show is being done by MAPPA studios who have been killing it so far with recent titles such as Dororo and God of Highschool. Raizel awakens from his 820-year slumber. He holds the special title of Noblesse, a pure-blooded Noble and protector of all other Nobles. In an attempt to protect Raizel, his servant Frankenstein enrolls him at Ye Ran High School, where Raizel learns the simple and quotidian routines of the human world through his classmates.

However, the Union, a secret society plotting to take over the world, dispatches modified humans and gradually encroaches on Raizel’s life, causing him to wield his mighty power to protect those around him…

After 820 years of intrigue, the secrets behind his slumber are finally revealed, and Raizel’s absolute protection as the Noblesse begins!

Finishing the trifecta of Webtoon anime adaptations, Noblesse is often considered to be more popular Webtoon compared to Tower of God and God of Highschool. And well, hot vampires aside, Noblesse also has an interesting setting which will be worth keeping an eye on. Plus, it’s Production I.G, so expect some quality adaptation. “The Empire” is a mechanized utopia with highly developed science and technology. “The Nebulis Sovereignty” is a nation feared as the “Land of the Witches” whose people use paranormal power. The two countries have been constantly at war for more than one hundred years, but now two heroes have appeared in their respective lands.

Iska has come to be recognized as the greatest military asset of the Empire at the youngest age in its history. Aliceliese is the Princess of the Nebulis Sovereignty, called the “Ice Calamity Witch” with fear by her enemies.

The two meet on the battlefield and become mortal enemies. Prides lock horns as they both fight uncompromisingly to protect their respective nations, families, and comrades.

But as they get to know each other as real people during their fierce battles, they start to become attracted to each other’s ways of life and ideals… though they are fully aware that fate will mock them cruelly, not allowing them to be together.

…Sure enough, the world’s tension heightens even more, and conspiracies of the major nations become more entangled. But even in such a world divided, this boy and girl cannot stop their feelings for each other…

Based on the synopsis, the story is essentially Romeo and Juliet but more leaning towards the military side of things. If the politics and world-building is done right, this series could be super interesting to watch. I recommend giving the first 3 episodes a watch and decide from there. The characters are nicely designed too! 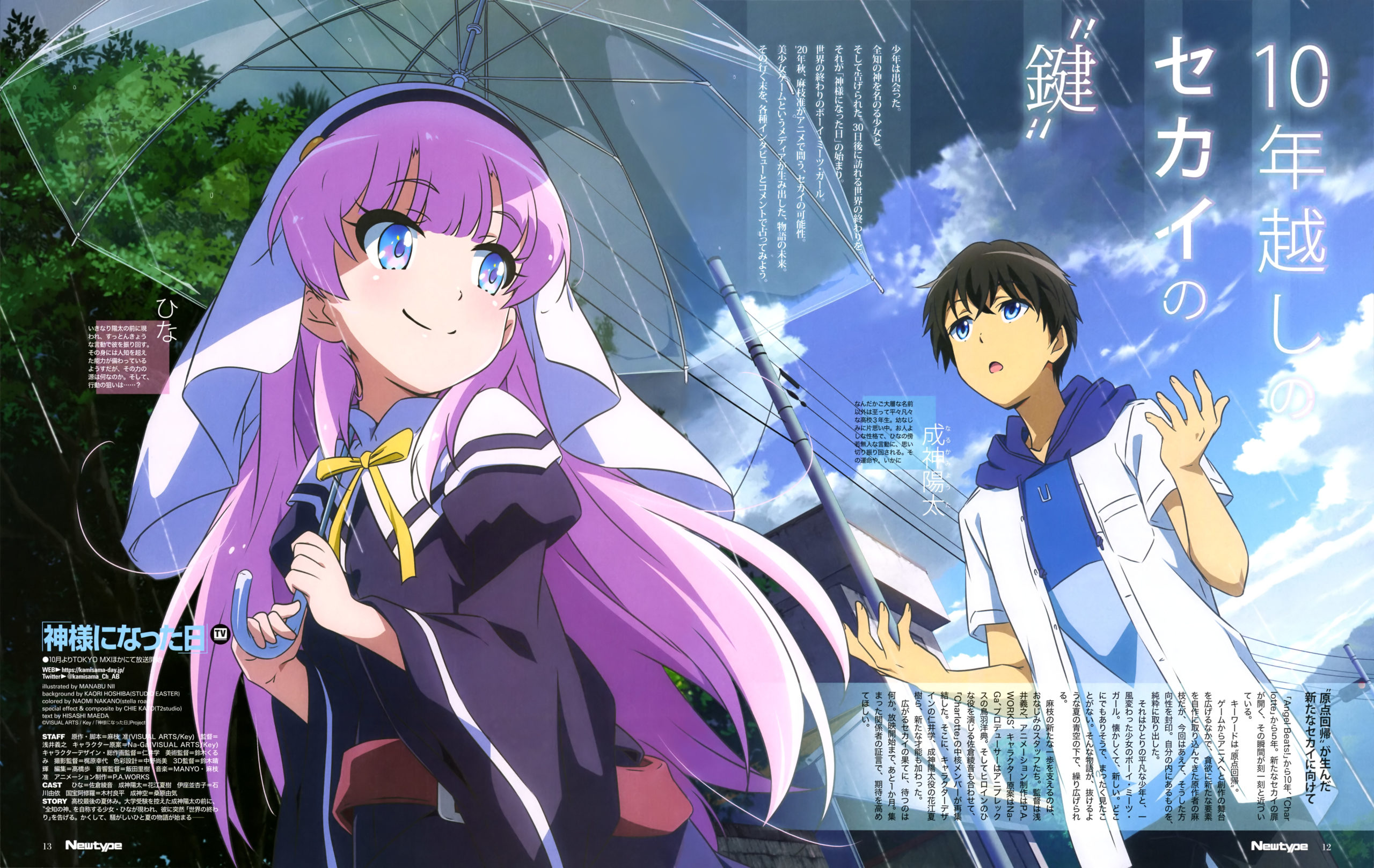 One day during Youta Narukami’s last summer vacation of high school, a girl named Hina suddenly appears and proclaims herself “the All-Knowing God.” Hina announces to the thoroughly confused Youta, “The world will end in 30 days.” Youta then witnesses Hina’s god-like powers of prophecy, convincing him that her powers are real. Hina’s naive innocence belies her powers, and she decides to live at Youta’s home for some reason. Thus begins an eventful summer before the end of the world

From the studio that brought us Charlotte and Angel Beats, get ready for another potential tear jerker in Kamisama ni Natte hi. After reading the synopsis and I’ve got to say, I want to know more about the story and what events will unfold after those 30 days. It’s not about the destination…

What’s your favorite story? Does it have a hero who slays a dragon and saves a princess? Or a child of prophecy destined for greatness? Well, my favorite story is a little different. It’s the tale of a witch who travels the world, seeking nothing in particular. With no quest of her own, she’s free to wander wherever the wind takes her, adding a few pages to the story of whomever she meets before setting off on her next adventure. At the end of her travels, the witch takes on an apprentice who will one day begin her own journey. And so the cycle continues, or so the story goes. Now, the witch who starts the story anew…who could she be?

If you’re looking for a magical journey (pun intended) of a Witch traveling across the foreign lands filled with fantasy elements, then look no further. Majo no Tabitabi would bring you on that magical journey with potentially a more character driven narrative. In the late 19th century, Great Britain rules over a quarter of the world. Nobles sit in their fancy homes in comfort and luxury, while the working class slaves away at their jobs. When young Albert James Moriarty’s upper-class family adopts two lower-class orphans, the cruelty the boys experience at his family’s hands cements Albert’s hatred of the nobility he was born into. He asks the older of the two boys—who has a genius mind and a killer instinct—to help him rid the world of evil, starting with Albert’s own family!

Yet another Production I.G production, come and watch some Handsome men take down the corrupt nobles in ye ole’ Britain. But jokes aside, the concept is giving me 91 days vibes and if the show is as brutal as the concept entails, this series could be considered as a Dark Horse of the season. Definitely keep your eyes peeled for this one! On Earth in the near future, humanity faced imminent destruction from mysterious giant creatures known as “Huge.” The entire world unites against the Huge, and successfully develops weaponry known as “CHARM” (Counter Huge Arms) by combining science and magic. CHARM exhibits high rates of synchronization with teenaged girls, and the girls who use CHARM are viewed as heroes called “Lilies.” Throughout the world, “Garden” military academies are established to train Lilies to face the Huge and to serve as bases to protect and guide people. This is a story about fighting girls who aim to become Lilies at one such Garden.

Shaft is back at it again with their Magical Girls and their questionably dangerous weapons. If you’re into the magical girl genre with a pretty unique world setting, this could be right up your alley.

Give us some support by subscribing to our Youtube Channel !
Tags: Fall 2020 AnimeFirst Impressions
ShareTweetShareSend
Previous Post