Assassin’s Creed Valhalla: The Siege of Paris DLC Review – Fighting of Rats And The French

We got out hands on Siege of Paris, the second major expansion for Assassin’s Creed Valhalla. With Siege, we’re seeing what is likely to be the pattern for DLCs for Eivor’s adventure, as once again another mysterious character shows up, inviting you to yet another new land with its own problems to be solved with Viking brutality and Assassin stealthiness.

It should be noted that you don’t need to beat Assassin’s Creed Valhalla to access the Siege of Paris. Toka, the key to the Paris DLC will appear after completing either Grantebridgescire or Ledecestrescire. That being said, the game recommends a Power level of 200, which is basically endgame, so don’t accidentally wander in here unless you like the idea of being bullied by the French.

The Only Way I’ll Go To France This Year

In Siege of Paris, you’re introduced to Charles the Fat, a tyrant who rules over Francia. Of course, Assassin’s Creed has a well-documented love of tyrants, so you’re going to need to get rid of King Charles

At least visually, I definitely appreciate how Francia looks compared to Ireland. There’s four new zones within Francia itself, with the more populated areas really looking run down to remind you that King Charles has got to go. Of course, you can sail down the Seine, which always makes for a good time as you get to your next areas or just take it slow since this is the closest you’re likely to get  to a trip to France this year. Aside from that, Assassin’s Creed Valhalla: Siege of Paris is a much more different DLC compared to Wrath of the Druids, at least visually. For one, you no longer have to worry about hallucinogenic gas, so that means no more wrestling werewolves in the woods. I’m kind of glad they didn’t double down on the hallucinogens, personally, but fighting werewolves was kind of fun in an otherwise serious medieval story.

The focus on the NPCs is also really appreciated, as you continue to make tough decisions about who to leave France to. It really gives the DLC a slightly more grounded feel, as its less about Eivor just sauntering in, overturning the monarchy then riding off into the sunset with a sweet new Scythe. One thing I really like about Siege of Paris is the greater emphasis on stealth. These come in the form of Infiltrations, which are basically reworked Black Box missions from Assassin’s Creed Unity. Here, you’ll unlock special assassination targets, but the game will require you to play along by learning more about them before giving you the endorphin high of a good kill.

Considering how little Assasin-ing we’ve been doing in the games, Infiltrations are really the highlight of Siege of Paris. Sneaking around, tailing NPCs really makes me feel like I’m playing Assassin’s Creed, not just an RPG that just so happens to have the same name.

That being said there aren’t many of them to be found- only about 5 in total in the DLC, and they’re tied to the main story. If nothing else, these infiltration missions remind you that life is fleeting, and you have to savor the good things while they’re still here instead of worrying about how much longer it’s going to be there.

There’s also a new mechanic in Rat Swarms- as the name implies, these would-be-chefs block your progress, forcing you to take alternate paths or else die a death full of ankle bites and horrible infections.You can chase them away by swinging your weapon, though, so if you’re not up for taking a detour then don’t be afraid to remind them who’s at the top of the food chain.

That being said, they’ll never really be gone for good, so if you’re going to choose violence you’ll have to be quick about it. 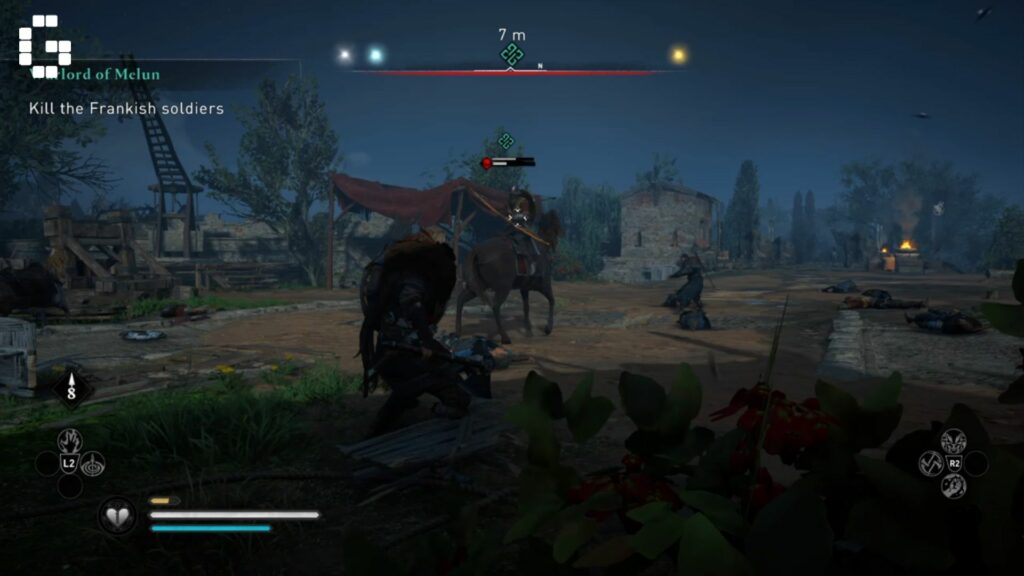 There’s also a new enemy, the Frankish Knights, here to ruin your day on horseback. Unlike other knight-type enemies the Franks are more adept at hit-and-run, and unfortunately have the movement speed to back it up. They’re incredibly frustrating, and can really be a pain if you’re not ready to deal with them. Personally, I think I enjoy the Siege of Paris a little more than Wrath of the Druids. The return to stealth is much obliged, even if but for a brief moment. Similarly, there’s some really fun moments such as with the new Scythe weapon, letting you turn Eivor into the anime boy of your dreams as you mow down hordes of jobbers while reciting some edgy poetry.

That being said, it’s totally endgame content. Don’t let its low entry point fool you, the game fully expects you to have gotten pretty far along the story, so unless you like living life on the edge maybe put Paris on the backburner until you get geared up to head there. The DLC is available as part of the Season Pass for Assassin’s Creed Valhalla.

The Battle Cats Unite! arrives in Southeast Asia in December

Ubisoft Singapore Head Speaks Out About Changes To Studio Culture

Ubisoft Singapore Head Speaks Out About Changes To Studio Culture