The Best Anime of 2021 That You Should Check Out

The best that we watched this year

2021 is almost about to pass and while the world has yet to go back to normality, anime continues on and we were treated to some best new shows the medium has to offer. Anime seems to further diversify in different genres and ideas and the shows we have here prove it.

In no particular order here is our totally subjective list of just some of the best anime that came out in 2021: If there’s one word to describe Wonder Egg Priority, it’s ambitious. A psychological drama, with a pristine dreamlike art style not based on existing work, dealing with sensitive issues like suicide, self-harm, body dysphoria, and depression. It’s a lot to take in and for the most part, it pulled it off well.

The story of four teenage girls fighting in other girls’ dreams to save them from their abusive home life, so that they can each bring back a friend that committed suicide. Despite not being a teenage girl, I could very much relate to some of the troubling thoughts presented in the anime and admire how respectfully they’re handled. You rarely see an anime handle these with such tact without just going try hard edge and it added a layer of emotion that few are able to reach. Even it is was a bit of a mess by the end.

It’s unfortunate that after the 12 episodes show ended, it received a ‘special’ that was supposed to act as an ending and resolve the mysteries the show set up. It was terrible. It didn’t solve anything and just added more questions. But I don’t think this terrible special should take away from how special the 12 episode series was. For those looking for a flawed but interesting and ambitious series, Wonder Egg Priority should be a priority. And that’s about it really, and that’s all you really need. No big drama or surprise twists just a lighthearted comedy hanging out with a bunch of fun characters. Our two leads have great chemistry and just watching them interact is fun. They’re fully three-dimensional characters with different emotions and dynamics that weave seamlessly into the dialogue. Their friends at school are much the same.

Horimiya is ultimately just sweet, and sometimes to be all you need to be to become one of the best anime of 2021, just be sweet. If Quentin Tarantino made an anime it would be Odd Taxi.

A Taxi driver drives many people, comedians, idols, nurses, gangsters, and perhaps even a missing girl. Little do any of them realize just how much they’re connected to each other or how they’ll all be entangled in a web of conspiracy and deceit.

As a fan of Fate/Zero and Baccano, I’m a sucker for anime with a large ensemble cast. Complete strangers whose lives start intertwining as the mystery escalates. I always like putting the pieces together in trying to figure out who will interact and connect with who.

Despite each character being an animal, I found myself loving how down-to-earth and human they are. From the apathetic Taxi Driver to the struggling comedians, to the monkey that just wants to get a date, most of the characters are just regular people who banter or fight like regular people so when the heavy conflict hits, you feel for them. Combine that with some of the best-written dialogue of the year and Odd Taxi is one you should definitely check out. Giant robots and giant kaiju are cool. This will never not be a fact and Dynazenon has some of the most exciting fight scenes of the year with a cool-designed mecha with many cool ways of taking down the kaiju.

Like its predecessor SSSS Griman however, it uniquely combines the kaiju action with a coming of age story. Each of our heroes has their own struggles they need to overcome in their own lives and watching them fight to break through these is admirable. It’s also an interesting contrast with our villains the kaiju users who never seem to try to change even when they know it’d be better for them. The young deaf-mute prince Bojji is looked down upon in his kingdom as weak and stupid. With his younger brother set to take the throne, he sets out with his new friend Kage to prove his strength and he may need to as the darker forces his brother is working with may be plotting their own devious schemes.

This is a very unique anime. I love the art style and how it makes use of the exaggerated designs seen in European fairy tales. But this is a dark fairy tale. The anime is quick to establish the cruel unfairness of the world where blood is spilled and family and allies can backstab each other at the drop of a hat.

But in the middle of this is Prince Bojji, the Best Boy of the year. An idealistic young prince that even when upset or frightened always tries his best and shows kindness to all and as a result meets some true friends, showing that there is some light in this dark world. He’s comedic, tragic, and genuinely heartwarming. You want to see this boy become king, he deserves to, and watching his journey has been truly rewarding. 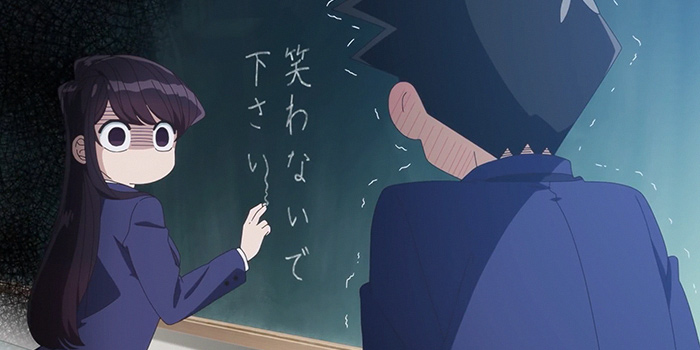 The long-awaited anime adaption of popular web manga Komi-san has graced the small screen on Netflix and it was more than anyone expected.

The story of a popular but cripplingly shy high school girl trying to make 100 friends was brought to life not only in the fantastic and wholesome writing but with steller animation and near-perfect comedic timing. Each gag and movement felt almost handcrafted to express as much about what each character is thinking as possible. A pretty big feat in a show where the main character rarely talks.

We did a first impression on the first episode if you want more information on the series. Basically, if you’re looking for a cute slice of life with well-done comedy, make friends with Komi-san. It’s Jojo. Do I really need to say more?

You may have noticed I haven’t put a lot of new seasons of old shows in the list despite shows like ReZero season 2 and Zombieland Saga Revenge being fantastic. That is pretty much because I wanted to highlight complete new shows that were released this year, however, one of the key aspects of Jojo is how it reinvents itself with each part.

We have a new setting and main character in the firey Jolyne Kujo sent to a maximum-security prison for a crime she didn’t commit. And this prison is crawling with enemy stand users. She and her friends have to save her father Jotaro and battle their way out of the prison. Between the god-like animation, the creative fight scenes that can turn something as mundane as catch into a clever mind game, and the well-written personalities of each lead, it’s great to see Jojo back in top form. If you loved the previous Jojo parts you’ll love the latest chapter.

Here’s our review of the first 12 episodes that have been released. If you haven’t watched any Jojo yet. Start.

These are only a handful of the best anime that came out in 2021. Despite all the problems in the current world, at least Japanese animation continues to go strong. May we all be blessed with more great anime in the coming year of 2022.

Have you seen any of these anime? If not, are you planning to? And what did you think were the best anime of 2021.