More Than Just The Memes

Komi Can’t Communicate Episode 1 has premiered on Netflix so here are our first impressions of what we thought of it. Based on the web manga of the same name, Komi has been highly anticipated due to the main heroine’s immense popularity in online anime circles as a beacon of wholesomeness (and internet memes) in her simple yet touching quest to make friends.

As someone who found the manga to be solid but not particularly engaging, I wondered if the anime could really live up to the hype of the manga, and somehow, it does.

The opening is a lovely summation of the plot, showing visuals of Komi’s lonely grey world slowly being filled with friends and color until she fully bursts out. And all set to some catchy light music, ‘Cinderella’ by Cider Girl.

Komi-San is the story of Shouko Komi, the most popular girl in class, beautiful, elegant and with good grades, the madonna of the school who rarely speaks to anyone likely because they’re just out of her league, except that’s not the case. She’s just shy, cripplingly shy.

Hirohito Tadano on the other hand is a pretty ordinary high school boy, but he just happens to have both the pleasure and curse of sitting next to Komi-san. Learning of her communication problem, he decides to help Komi make 100 new friends and get over her shyness.

The first episode is a good introduction to ur two main leads to the central conflict. Komi wants to talk more but is crippling quiet and Tadano wants to want but being friends with Komi has ironically alienated him from most of his peers.

The Animation is The True madonna

The first noteworthy thing about the anime is the superb animation and comedic timing. Not only is the animation very high quality with all the vibrant colors, but its editing is on point. The anime often will start a scene quietly and then burst into exaggerated stylized action in order to show the character’s emotions.

Komi doing something as simple as walking towards the blackboard and writing her name is goes from a meek crawl to a slick hack and slash within seconds. It’s a great visual cue of her extreme shyness yet wrapped in stylish elegance within seconds, and her actions are seen by the rest of the class. It’s both funny and insightful storytelling, and it just looks really cool.

This glorious animation not only extends to the gags but the characters themselves. Komi-san may not say a lot but here actions certainly speak louder than words. Both of our leads an incredibly expressive from their facial features to their subtle body language. Even with little dialogue, it is easy to read what both are thinking. And yes, it is very cute.

I especially like the use of the Jojo-style character symbols being placed to express the mood the characters are feeling or how certain characters are even presented with previous clips of the episode behind them in the background to represent them scrolling back through their memories. It’s impressive to see the animators find so many creative solutions to get around the fact that Komi can’t express herself with dialogue.

The blackboard and the subtitles

Unfortunately, Komi-san has already courted controversy due to Netflix’s own communication issues with viewers due to a lack of subtitles for written text in the episode. This is most notable during the episode’s climax when Komi and Tadano have a heartfelt conversation through words on the blackboard and the subtitles only translate part of it. It is frustrating and bad form on Netflix‘s part. I do hope they plan to fix it at some point. That being said, it also doesn’t take away from the fact that this blackboard scene is beautiful. The music explodes into a magnificent crescendo as Komi-san practically pours her heart to her first-ever friend and all without dialogue.

I think part of the popularity of the Komi manga is the fact that it’s so relatable. So many introverted anime fans have likely felt the same emotions of awkwardness and anxiety that Komi and Tadano go through even in this one episode, and while it’s played for laughs, it’s also treated with a level of respect and kindness. It’s nice to see these struggles represented visually on screen.

It is a testament to Studio OLM (who also make the Pokemon anime and Odd Taxi) that even without the proper subtitles, the animation and music alone were able to perfectly convert the atmosphere of the scene. 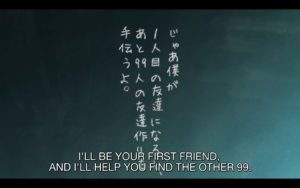 That was my first impression of Komi Can’t Communicate and from what I’ve seen Komi-san is off to a great start. The animation is top-notch and gracefully depicts the slapstick humor and character drama at the heart of the story. If Netflix could just fix the subtitle issue, they could be a strong contender for anime of the year.

Tower of Fantasy beta announced for November in China