The newest ASUS ROG Zephyrus G14 and G15 have at last been launched, sporting the LED AniMe Matrix on its lid besides the AMD Ryzen™ 9 4900HS Processor 3.0 GHz (8M Cache, up to 4.4 GHz) and the NVIDIA® GeForce® RTX 2060 Max-Q GDDR6 6GB GPU, but how does it perform in practice? That’s what this review is for!

A CHEF’S KISS DESIGN
The outer looks of this laptop will definitely turn heads. The lid is made of aluminium-magnesium alloy, and has a screen module dubbed the AniMe Matrix which utilizes 1,215 mini white LED lights. The in-built Armory Crate lets users change the patterns, animation or text that will be displayed on the laptop’s lid. The screen may be a mere 14-inches, but it has a 60Hz refresh rate, Pantone-validated and has 100% sRGB coverage. The discreet GPU utilizes the latest NVIDIA Turing design, capable of ray tracing. The whole package enables high-end lighting, shadows and so forth for some of the best graphics you could ask for, and in combination with computing technology that can lighten loads for heavy processes, it will function just as well for content creators, 3D modelling or deep learning. Since the refresh rate is stuck at 60Hz, players expecting better performance in FPS might find it lacking without the 120Hz or 144Hz capability. Still, hardware wise, you can’t turn your nose up at the ROG Zephyrus G14. It comes packing the AMD Ryzen 9-4900HS, RTX 2060 Max-Q GPU, 16GB RAM and 1TB M.2 SSD. 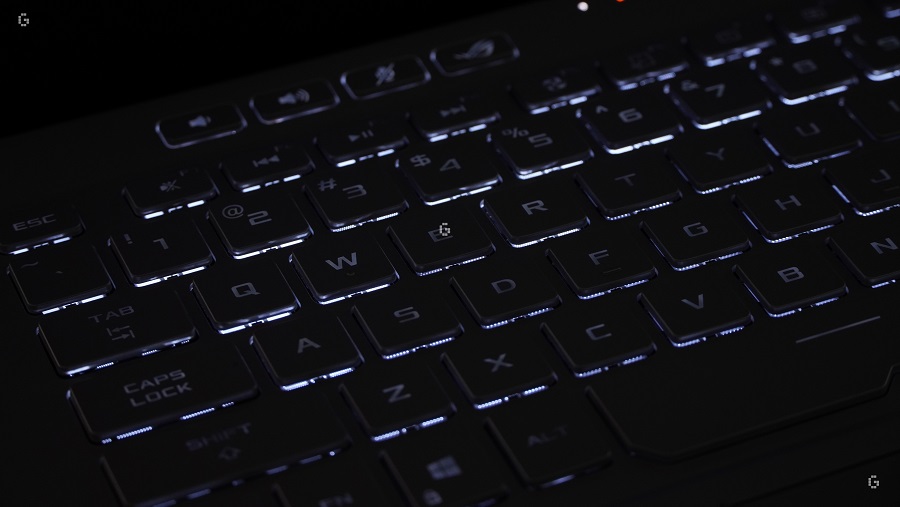 While the Zephyrus G14 is dubbed a gaming laptop, it doesn’t come with the RGB keyboard many probably expect. Nonetheless, it’s got other nifty features such as Fingerprint Log-in – touch the power button to log in – and is very comfortable to use. It’s got Hotkeys for gaming-related purposes, for volume change, mic mute or just going straight to the Armory Crate for more options.

In regards to its thermals, it’s spread across four areas: above the keyboard, below the motor pen body, and on the left and right side. It uses an Ergo-Lift design, which helps in dissipating the heat b elow the laptop. With the in-built Armory Crate, you can further tweak the laptop’s conditions. It comes with gaming mode for Windows, Silent, Performance, Turbo and Manual presets depending on what you’re using your machine for.

Naturally, the laptop went through a battery of tests, which you can see below:

Scoring 70% in this test, the ROG Zephyrus G14 will comfortably run AAA games at High or Ultra quality without a sweat. With the 1TB SSD, it’s gonna store all the massive updates your games might need too, or just easily run whatever heavy loads you might need it for.

Achieving a 9039 high score and 4299 and 10892 in film and photo editing, it definitively proves the ROG Zephyrus G14’s capabilities in heavy multimedia work, not solely in gaming. The AMYD Ryzen 9-4900HS outputted a 4124 point result in the multi-thread Cinebench R20 test, at fourth place when compared to similar processors.

The scores are pretty and all, but how does it work in practice? We put the ROG Zephyrus G14 through several games in Turbo Mode: In GTA V, all settings have been cranked to the maximum, and throughout the test in any situation, the game kept a cool 83 to 90 FPS, sometimes even breaking 100 FPS. Due to the laptop’s keyboard arrangement, however, it can be a little tough in regards to the heli or airplane controls. Once again maxing out the settings, the various bombastic explosions and non-stop shooting still pulled in 59 to 79 FPS on average. However, when it came to screen recording, the FPS did suffer a little. As with the other two titles, maximum quality is set, hitting anywhere between 100 to 130 FPS once we got the show on the road. As such, all your fancy combos will be shown off as how they should be without any problem on the ROG Zephyrus G14. Last but not least is Need for Speed Heat, with FPS hanging around 55 and 65 FPS with settings all at Ultra, sometimes hitting 70. While it may not be incredibly high, nonetheless the driving experience is very smooth. VERDICT: IS IT WORTH?

As a whole, the ASUS ROG Zephyrus G14 has an arresting design thanks to its AniMe Matrix module for that extra touch of personalization. It’s incredibly light despite being dubbed a gaming laptop, so you can imagine gaming on the go with ease.

The numbers show that the machine is certainly very capable of its gaming laptop moniker, so heavy gamers will not need to worry about its level of performance. Plus, if you’re a hobbyist looking to be more serious in creative editing works, the same performance the machine brings to games will apply to your creative work, and the large storage you have will give you plenty of room to play around with. Turbo Mode helps in further improving performance, but it does get a little noisy and the laptop can feel noticeably warmer. In order for the sounds not to be drown out, you might want to invest in a headset.