As we approach a new month and a new year, That Time I Got Reincarnated as a Slime ISEKAI Memories has just dropped another new event. This event, Demon Lord New Year’s Meal, is themed around fire, so expect all the weekly releases to be fire-element units.

Three new characters have been added to the game. They are: 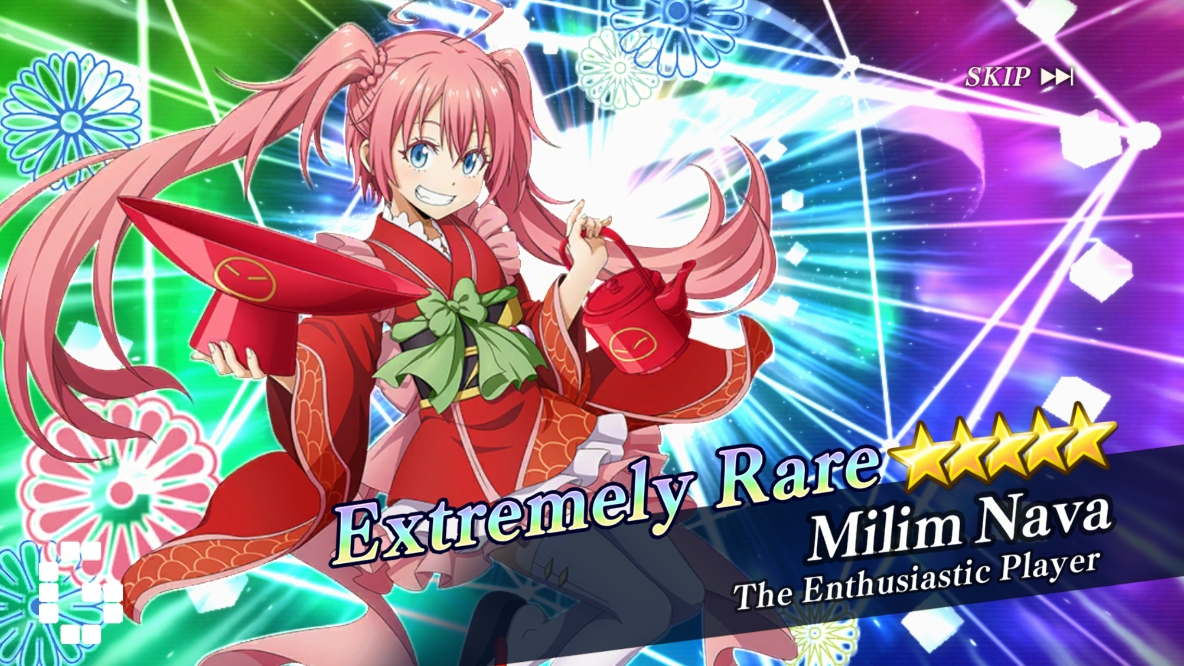 New Year’s Milim is a fire-element physical damage dealer. Stat-wise, she’s an ATK focused unit. Her Secret Skill is single-target which is fantastic, but what makes her truly incredibly is her first skill. It is a team-wide buff that basically guarantees critical hits and there’s nothing the enemy could do about that. The first skill seals enemies’ critical resist, which means that even if they have critical resistance buff, it won’t work. This is the skill that [Awakened Demon Lord] Rimuru Tempest should have, an absolutely broken buff that can compete alongside Space Rimuru and Wind Milim’s buff.

[The Enthusiastic Player] Milim Nava’s second skill, while not as ridiculous as her first one, is also useful. It changes 1 Soul of Skills into 1 Soul of Divine Protection. Overall, New Year’s Milim is an absolute powerhouse.

As a Protection character, New Year’s Rimuru buffs fire DMG by 16% and wind DMG by 8%. Since you should probably have several great wind units from the previous event, this makes [The Chancellor of Prosperity] Rimuru Tempest a pretty worthwhile addition.

In terms of the actual Divine Protection that he provides, New Year’s Rimuru does 3 things:

Comparing his Divine Protection to that of Ifrit’s, they’re about even. Ifrit’s Divine Protection has the insanely useful ability to fill up almost half of your team’s Secret Skill gauge which will probably help you end fights that you normally couldn’t. However, New Year’s Rimuru’s fire resistance reduction provides a higher and longer overall damage increase compared to Ifrit’s 15% fire damage buff for 2 turns, meaning that Rimuru is more useful for consistent damage.

Regardless, Demon Lord New Year’s Meal Part 1 is easily a must-pull. Both the Battle and Protection characters of this banner are superior to the previous dark and wind-themed events. I highly recommend pulling for [The Enthusiastic Player] Milim Nava because of how incredible she is. [The Chancellor of Prosperity] Rimuru Tempest is optional if you already have Ifrit, but he makes a great addition nonetheless. Last but not least, the New Year event in Slime ISEKAI Memories is not complete without bringing up the free 4★ character that everyone will get, [The Holy Sunrise] Shuna. New Year’s Shuna is a fire-element character, so do not confuse her with Ogre Shuna, who’s also a 4★ fire-element character. New Year’s Shuna deals magical damage while her Secret Skill deals damage to all enemies. Like most free 4★ event characters, her usefulness comes from the fact that you can easily get her to 6★.

Luckily, her skills aren’t as Christmas Shion in the last event. New Year’s Shuna’s first skill is an ever-useful Soul Change that changes 2 Soul of Skills into 2 Soul of Divine Protection. Her second skill removes poison. Use her for her Soul Change or to help tank a few hits for your main damage dealers. Beyond that, she won’t be able to contribute as much.

We wish you all the best for the New Year in Slime ISEKAI Memories! Yesterday, we also made a comparison between Octagram Milim and Octagram Ramiris. If you’re wondering who to spend your Octagram Emblems on, be sure to check it out.

Opinion: I Want This Pandemic To End So I Can Play Tabletop Games Again

Opinion: I Want This Pandemic To End So I Can Play Tabletop Games Again