Open Country PC Review – Taking the country by storm (or not)

Since my experience of trying out the preview of Open Country, a huge update took place and I revisited the game for a full review.

Open Country is available on PC, PS4 and Xbox One. Just like the preview, this review is also based on the PC version of the game. Has the game addressed its shortcomings, or is it like a deer in headlights, unable to notice the problems that threaten its wellbeing?

Carry on reading this PC Review of Open Country to find out! 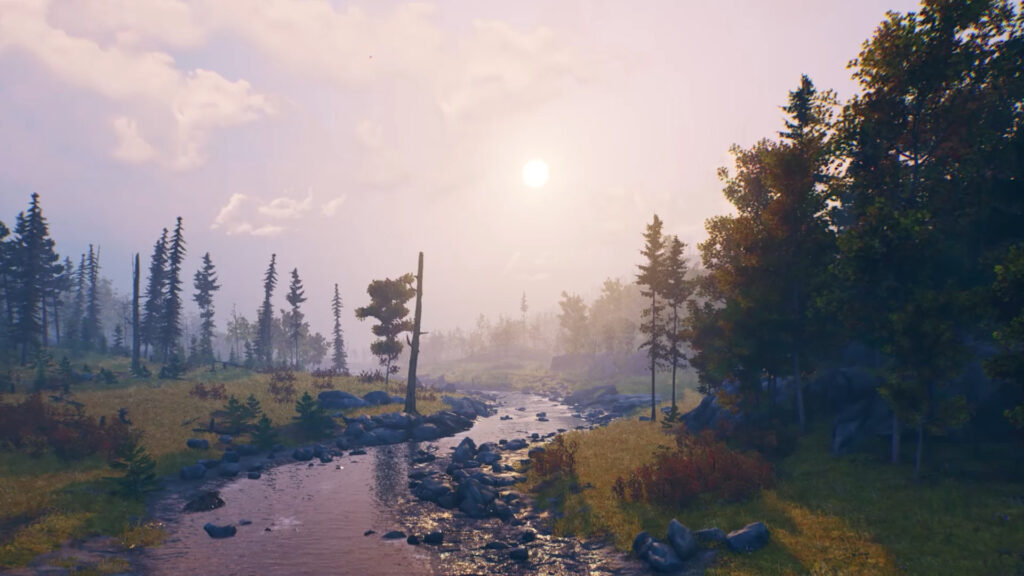 Graphics are mostly the same since the preview. However, this time around, I wandered off to the edges of the map a bit, and the background beyond the boundary looks gorgeous. Developer Fun Labs did a great jobs with the graphics. My only minor gripe is that the colours can sometimes seem a bit too vibrant at times, but I can imagine a lot more people loving the graphics more than I already do thanks to that.

As to be expected from a game that takes place 99% of the time in the outdoors, weather also changes occasionally. Sometimes, it rains. The rain effects look fine, but it does not affect anything beyond visibility. In my opinion, I wished that it would have a bigger effect on my hunting.

Mother Nature aside, the UI of the game is something that needs to be improved. Sadly, it is quite messy and rather unintuitive. The skills tab is a prime example of this. Having to scroll all the way down to a specific skill is a chore. 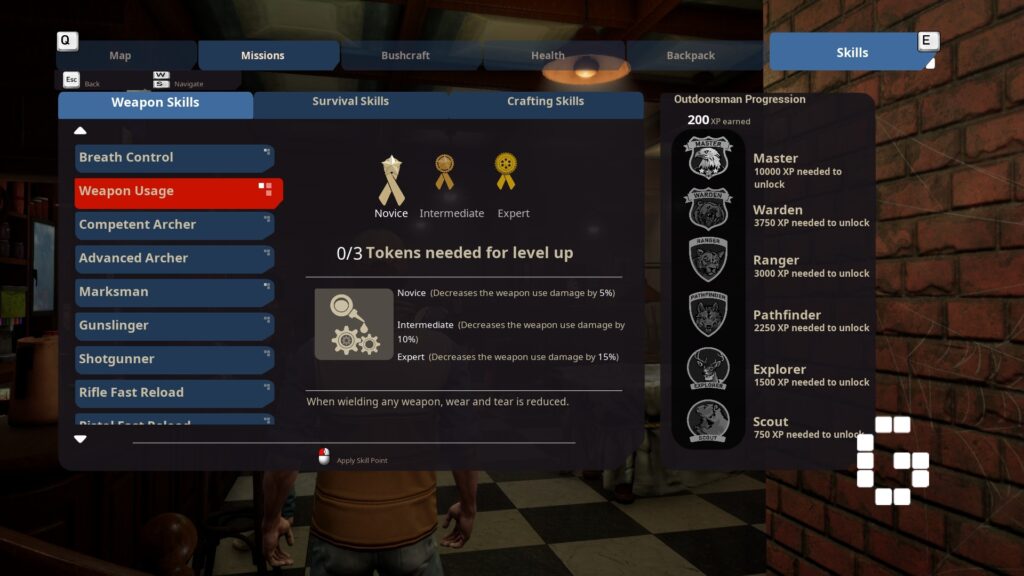 Furthermore, the game also prevents me from accessing my backpack in a lodge, for some reason.

Another part of the UI that is counterintuitive is the map. Sometimes, you might get stuck and be unable to go left anymore, despite the map showing that there is something on the left. The solution to this issue is to zoom in just so you can go left again. Trying to drag the map to the left causes it to go right, which is wonky. Unlike most hunting games such as those from the Cabela’s Big Game Hunter series, survival is quite a large aspect of Open Country, which I am not too big a fan of in a hunting game. Players have to maintain their hunger, thirst, tiredness and temperature bars at a good level.

They are easy enough to manage, thankfully. I have not died from one of those gauges dropping to 0. However, when one of the bars is close to empty, Hunter Sense, which is a useful ability in tracking prey, will be unavailable, so beware.

Weight management is a factor in the game. In longer hunts, you might need to bring 3 logs and 8 branches with you to build a camp in case you are tired. That already takes up about one third of your weight load. On top of that, you have to bring food, fire sources, extra branches for fuel, your gun and ammo which leaves you little space left for anything. While weight load can be increased by learning the appropriate skills, being forced to build a camp in the woods boggles me when there is a thing called a “tent”, which the vast majority of hunters use all the time. Yup, you cannot use tents in this hunting simulator.

Also, like most survival game protagonists, your character is very fragile. Things like falling from slightly higher ground causes ankle sprains. Running too long causes muscle sprains. My issue with these conditions is the lack of explanation from the game itself. The game does not communicate directly what are the effects of these ailments to the player, and many times I was left wondering if I should even care about them or not.

Also, I also killed my character once to see what happens. Beyond the simple “load back to your latest autosave”, the game does not punish you like other survival games (making you lose some of your items, for example).

However, the biggest issue about this that I faced in both my preview and this review is that you cannot manually save your progress in Open Country. Worse, the loading screen tips say that you can, even though you actually cannot. What happens if you have to stop playing the game due to an emergency? Well, back to hunting same the elk that you have already hunted 30 minutes ago. While being unable to save is a huge turn-off, the hunting in the game isn’t. There is an emphasis on tracking down your prey, which is expected of a hunting simulator. Thankfully, it delivers on that level.

There is also the Hunter Sense ability which is necessary to find the tracks left by the prey. Once you discovered the prey’s initial tracks, you do not really need to use Hunter Sense anymore. You can just follow the blue line indicating where to go and it will bring you to another track.

As for the smaller prey like rabbits, good luck because there is nothing to guide you. Thankfully, these smaller prey are pretty much everywhere. Like most animals, they will run away when you make too loud of noise. In the case of small game, they will hide in the nearest hole. Once the hiding animation starts, they become invulnerable, which is disappointing.

In addition, there are also other predators which you will need to exercise caution around. It adds some degree of realism to the game, which is nice. Hunting with a friend online sounds as fun as hunting with the AI-controlled dog. However, for reasons unknown to me, there is no name to the server whatsoever. You will have no idea whose server you are joining until you actually join it. This is frustrating, needless to say. 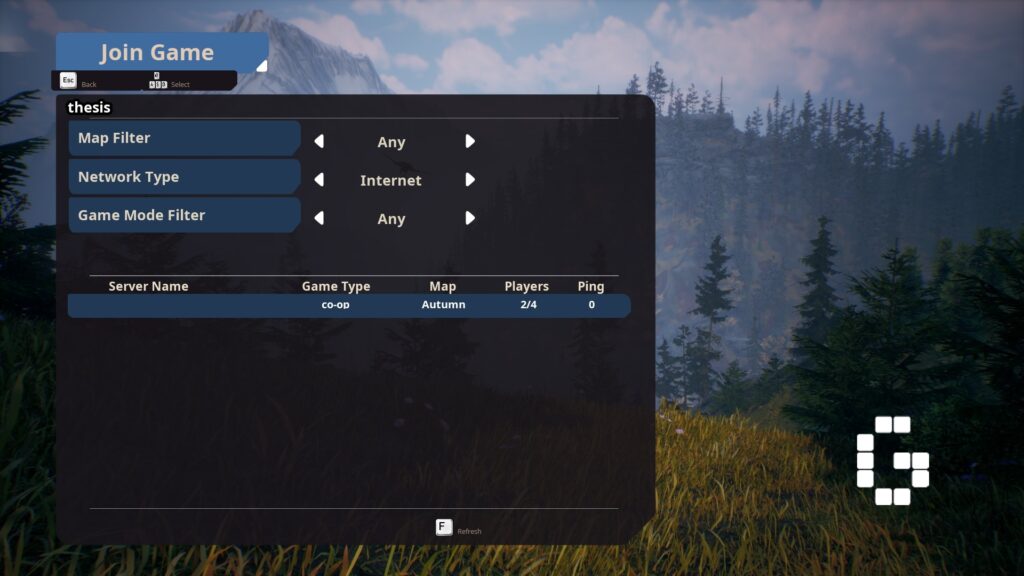 As for the actual multiplayer experience itself, gameplay is smooth without any lagging or delay. The experience is basically entirely the same as single player, with the added benefit of having another pair of hands to hunt or build stuff. Note that there is no indicator or marker of your teammate whatsoever on the screen or HUD. Compound this with the lack of voice or text chat, and communication is only possible via 3rd party software.

You can use the map to see where your partner is. Sadly, having to pull up the map every so often just to locate your friend detracts from the hunting experience.

In addition, skills in single player are not transferable to multiplayer. If you want to play with your friend, you have to start from scratch. There is also a limitation to the weapons in multiplayer for absolutely no reason other than to frustrate players. You can select your weapon at the start (without spending in-game money), but there is a smaller pool of weapons in a single type. For example, there is only 1 bow in multiplayer and only 1 player can use that bow. I have complained about several issues in this review thus far, but the one that really stands out (besides the inability to save manually) is the weird controls of Open Country. They fixed the character getting stuck glitch from jumping which I noted in my preview which is a welcome change.

However, the controls are still poorly optimised. Accessing the item bar results in the player being unable to move. You still have no option to change ADS from hold to toggle. Trying to access the crafting menu on a keyboard is a pain. There is no option to set keybindings. These issues, while patchable, still exist, but as long as they do, they are a red flag in my eyes.

This time, however, I even faced some input lag while walking. Pressing W on the keyboard makes my character move, but half a second later. FPS is fine, so I am not sure what is the problem.

Last but not least, driving is still a nightmare in the game. Having to constantly fight against the game’s AI just to get a good angle while driving is not fun. The game automatically adjusts the camera angle every time when I manually adjust it for no apparent reason. For this review, I remain on the same spot that I stood since the earlier Open Country preview. The game has a lot of potential by virtue of delivering a solid hunting simulator experience while also having beautiful environments and graphics.

Sadly, these positives are weighed down by what I feel are rather poorly executed survival mechanics, awful controls and the lack of being able to save manually, which should be a given for a game like this.

Ultimately, despite its positives, I cannot recommend Open Country until a manual save feature is implemented and some issues I highlighted regarding the UI and controls are fixed.

To learn more about the game, you can check it out on Steam.