Any wild conspiracy theories borne from Kingdom Hearts: Melody of Memory? The rhythm game spin-off released 13 November 2020, with a variety of tracks across the series, aiming to recap the plot (what plot?) for fans and non-fans alike. I don’t know what are the hottest tracks for series fans out there, but hopefully should any track be missing, they could add those in eventually. Let’s get on with the review. You can check out the demo impressions here.

The assets at first glance look pretty much taken wholesale from the original games, which makes sense: there’s not really a need to make all new ones for this spin-off title whose main draw isn’t how it looks. It may be a little disappointing though if you were expecting, say, models from KHIII. As with the demo, the background can be quite distracting as you move along the track, and there’s no way to turn it off to let you focus on hitting the notes. Seems like an oversight for a rhythm game. There won’t be cutscenes at every world, but they will indicate with a clapperboard at relevant points for Kairi to narrate a slice of the story when it does appear. My DualShock was dropping a lot of inputs, unfortunately, so it can get quite frustrating. There isn’t a practice mode to try out your inputs, so you’ll have to hope your controller doesn’t suddenly die on you. Options wise, it’s on the limited side with no rebinding save for inverting controls. Also, where’s my Japanese dub option? 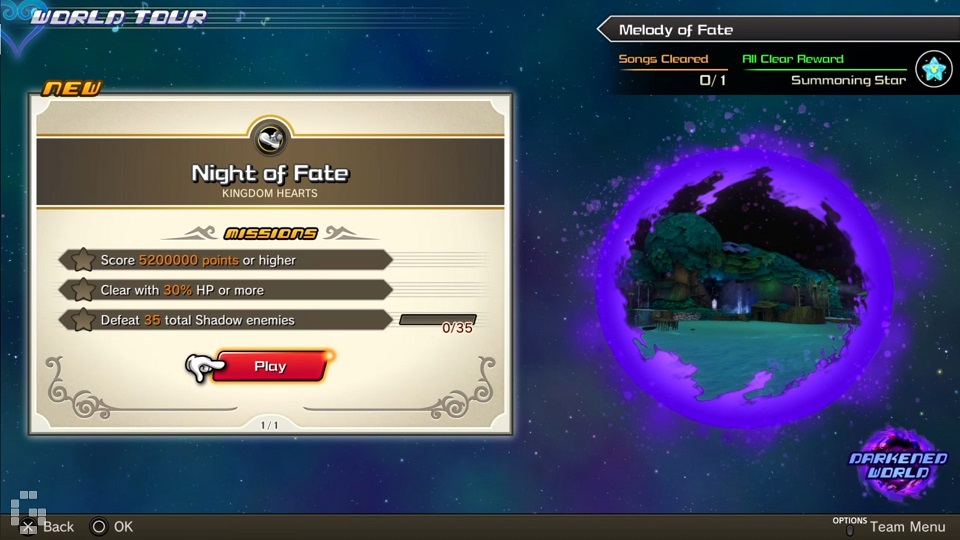 The main mode is World Tour, where you travel from world to world to unlock cutscenes and acquire more teams, and run into the Boss stages along the way. You’ll be able to make consumables – from potions to heal you up at certain health thresholds, increased drop rates or EXP, or summon Mickey – to take with you on the stages to help out, with three difficulty options per stage: Beginner, Standard and Proud. The One Button input option is not available for World Tour, so you still need a measure of competence to clear the song. Each stage has 3 missions for one star each, and unlocking more worlds require a certain number of stars. Completing all the songs in an available stage will reward additional items. Guest members are just that: they take the place of one person on your chosen team, but are basically just cameos and don’t do anything extra. Besides the regular World Tour stages, there will be the Boss stages you encounter. The controls are just a little more complex here, and can be quite tough especially when your controller’s inputs are dropping like mine. Don’t be afraid to break out the items to help you through. About an hour in, I got to unlock Team Days once I cleared the first Boss stage I encountered. Least there’s no excruciatingly long unskippable cutscene whenever I die to a boss, that’s always nice.

The potions are to help out beginners more, because if you’re relatively decent at rhythm games, they’re not necessary. You would want to grind out the item drops though, and EXP for new teams whenever you want to work on those. The Moogle Shop is where you synthesize these items: from the stage consumables to things like character-specific Memory Drive stages, and art for your ProfiCards. Certain recipes increase the shop EXP, and there are bonuses you can get for levelling the shop enough.

These synthesized items will then be logged into the Museum, which unlocks additional bonuses when you have collected a certain amount within a category. Otherwise, you can review the cutscenes you’ve unlocked, or check out hints for Feats, which are basically achievements. 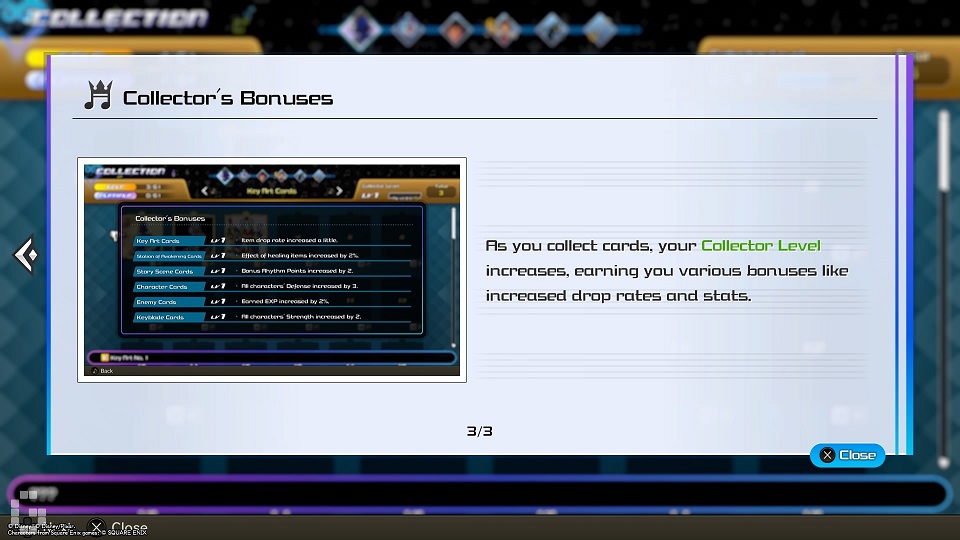 You can play online against eithers, with Tricks being an additional wrinkle in gameplay. These Tricks will trigger whenever you fill up the bar at the bottom, for that added layer of distraction. You’ll be able to play songs you haven’t unlocked yet, but your score won’t save. Winning matches, like the mandatory ones against the AI, can give you some extra rewards. For those you want the challenge, there is of course, Proud and Performer mode. These extra notes in Performer mode remove the timing window, so it’s not for the beginners, to put it lightly. Team level doesn’t affect score at all if you were worried, but their additional stats they gain on levels can give you extra room for error. The main menu music and art also changes depending on the team, so that’s nice for those who are fans of the other three besides Classic. As someone who isn’t a Kingdom Hearts fan, I think this is pretty neat, but there are certain points where I think it doesn’t quite hit the necessary points as a rhythm game.