In publisher VNG’s home country of Vietnam, mobile game OMG! Gods of Three Kingdoms (OMG!三国霸王) has racked up over a million users. Furthermore, numerous Vietnamese personalities from top-tier streamers, reviewers, and even singers, including the likes of Hoàng Yến Chibi, Ba Rọi Béo, and Vinh Râu have also collaborated with the title.

Meanwhile in neighboring Thailand, OMG! Gods of Three Kingdoms has gained over 70,000 pre-registrations and 400,000 installs within the first two weeks of launch. Currently, the game has an active user base of nearly 200,000 players. OMG! Gods of Three Kingdoms is an excellent combination between card-battle mechanics and tactical RPG combat experience, opening a brand new world of Three Kingdoms legends. Different from many other card-battle games, OMG! Gods of Three Kingdoms offers a new formation of 3×3, in which you can recruit and form teams of legendary heroes such as Guan Yu, Lu Bu and ZhaoYun, depending on your own strategic planning. Each hero has 4 unique abilities and is classified into 6 roles: Commander, Defender, Strategist, Vanguard, Assassin and Supporter. Especially, the main character, who’s however not related to the Three Kingdoms theme, also can take all of those roles just by changing their fashion skins. This feature brings out thousands of formations players can use to compete with each other.

All new players will receive 50 free draws on the gacha machine once they reach level 6, ensuring that everyone will have a good chance of starting with the warriors they want right from the start. You’ll also want a healthy reserve of heroes you can get, as the game’s unique Campaign system offers a variety of activities for you to do, from battles to farming, and even treasure hunts! Explore all the corners of the campaign map, and you might even find entrances to secret dungeons that offer even more rewards! Despite various activities to explore, OMG! Gods of Three Kingdoms still respects your time. The game offers an Auto-Battle system that lets players progress even when they’re engaged with something else. Furthermore, no in-game actions will require you to wait for specific durations of time in real life, so you can jump in the game whenever you want. And most importantly, the game is very generous with its rewards, offering free Golden Ingot used for summoning simply by completing the daily tasks and/or reaching campaign milestones, so you’ll always be able to recruit more warriors to your army!

This summer, the ‘hurricane’ named OMG! Gods of Three Kingdoms has already swept through Vietnam and Thailand, and now is coming to Singapore and Malaysia. While waiting to explore this game on June-02, don’t forget to pre-register for OMG! Gods of Three Kingdoms and claim all the special rewards that await. Besides the numerous in-game items, VNG is also offering those who pre-register a chance to win plenty of real-life rewards as well, from the ASUS ROG G14 Zephyrus GA401II to a Nintendo Switch! 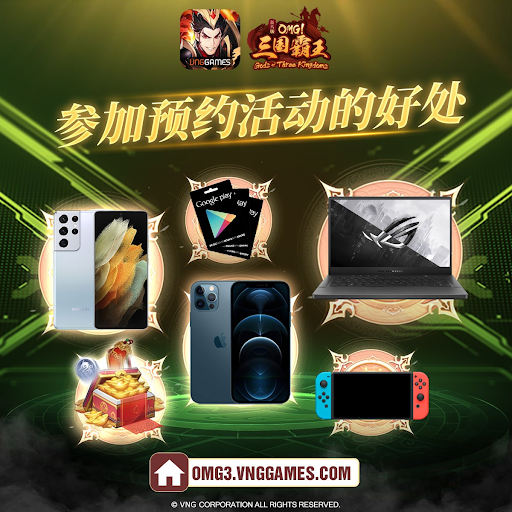 So why wait? Pre-register now!

OMG! Gods of Three Kingdoms is published by VNGGames.

As one of the four key business units of VNG Corporation – Vietnam’s first-ever unicorn start-up (The Asean Post), VNGGames is recognized as one of the leading game publishers based in Vietnam. With 16 years of experience in publishing games in Vietnam markets and some foreign regions including South East Asia, North America & Latin America, VNGGames is now seriously taking further steps to conquer the global stage, starting with SEA markets.