There’s a new Digimon Dim Card, the Primeval Warriors, based around Wormmon, Stingmon, and their various evolutions.

The Dim Card will release in March 2022. Alongside the dim card is a new Dim Card Holster vol. 02. This metallic green case allows you to store and carry 5 dim cards for your Digimon Vital Bracelet. This holster will come bundled with the Stingmon Primeval Warriors Dim Card.

We’ve also got a look at the evolution tree that will come with the Primeval Warriors Dim Card. As you can imagine it is primarily based around Wormmon and his evolution line of insect-like evolved forms including his DNA evolved forms like Paildramon and Imperialdramon as well as Hudiemon, Wormmon’s evolution from the Digimon JRPG, Digimon Story: Cyber Sleuth – Hacker’s Memory. 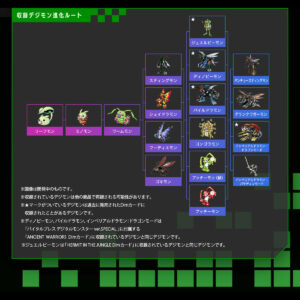 Several of Wormmon’s armor evolutions have also been used as champion and ultimate forms including two variations of Pucchiemon (red and green) and Kongoumon. It even has Stingmon’s popular Bancho evolution, BanchoStingmon.

Wormmon is most well known for being one of the main Digimon partners in Digimon Adventure 02. He served as the Digimon partner of Ken Ichijouji aka The Digimon Emperor who heavily mistreated Wormon before eventually reforming and growing a true bond with him. This allowed Wormmon to evolve into Stingmon and later DNA digivolve into Paildramon. If you’re a fan of the cute little creepy crawly this is certainly the dim card for you.

The Stingmon Primeval Warriors Dim Card and Card Holder Vol 2 will be released in March 2022 and can be preordered on Bandai Namco’s website. Preorders will close on December 20th 2021.

If you’re interested in Digmon Dim Cards, check out the previous announcements of the Digimon Ghost Game Dim Cards.