Mini DayZ 2, a mobile zombie survival game based off of the DayZ survival game on PC, is available now for Android and iOS devices.

In Mini DayZ 2, exploration is essential to survive. Across thousands of maps scattered in 28 raid locations featuring 16 different biomes, each with its own terrain and hidden treasures, you will find the junk and loot needed to craft other supplies and weapons.

The game is a sequel to Mini DayZ, which is itself a mobile port of the popular Arma 3 mod-turned-solo release DayZ. 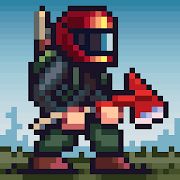 Mini DayZ 2
Developer: Bohemia Interactive
Release Date: 2021-06-17
Android, iOS
A deadly virus plagues the world. Animals are running wild. People are running wilder. Civilization has collapsed and the end times are here. Only you can help humanity.
Give us some support by subscribing to our Youtube Channel !
Tags: Bohemia InteractiveMini DayZ 2
ShareTweetShareSend
Previous Post