by Ben
in All, Film, Reviews
Reading Time: 3 mins read

Age is just a number, jail is just a room—that’s how it goes for Liam Neeson the in action flick Memory, which is what this review is about. Liam Neeson plays the role of Alex Lewis, an ageing killer suffering from Alzheimer’s.

If you aren’t aware, Memory is a remake of the 2003 Belgian film The Alzheimer Case, based on the novel De zaak Alzheimer by Jef Geeraerts. Admittedly, I haven’t watched or read either of them prior to Memory, so don’t expect any comparisons with them in this review. It is said that there are four “untouchable” taboos in Hollywood movies. Keanu Reeves’s dog, Jason Statham’s packages, Liam Neeson’s daughter, and Denzel Washington’s friend. Liam Neeson’s appearance in the Taken series cements him as a pop culture icon, forever remembered for his “particular set of skills” and “finding people and killing them”.

Liam Neeson was 56 years old during the first Taken, but in Memory, the action star is 69! The borderline septuagenarian is getting old and decrepit, so to see him kick butt when the film shows that he’s in dire need of nursing care is a joy to watch. While it doesn’t quite match Hugh Jackman’s ageing struggles as Wolverine in Logan, Liam Neeson’s performance is commendable. Unfortunately, the side cast doesn’t nearly shine as much as him, but most of us are basically watching Memory for Liam Neeson anyway. 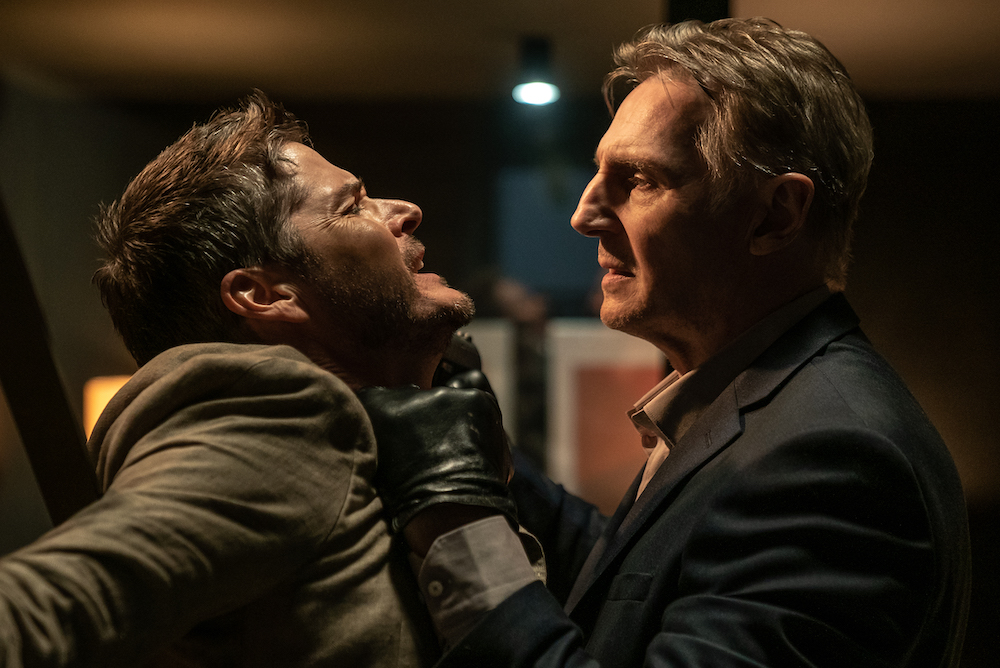 Unfortunately, what’s dragging the movie down is pacing. Yes, it’s understandable that the leading man is well past his prime for physical activity, but as an action film, it suffers from the lack of action scenes. It felt as if there were only 2 or 3 action scenes, but they ultimately boil down to the standard shootout and gunfight. If you’re looking for memorable, intense hand-to-hand combat or impeccable choreography like John Wick, prepare to be disappointed.

As for the plot, for a film titled “Memory“, I inevitably went into the screening for the review with the idea that protagonist Alex Lewis’s Alzheimer’s disease will be a central focus of the film, but I was mistaken. This is the biggest difference between Memory and Logan. Whereas having to come to terms with age and weakness was such a fascinating watch in the latter, the former doesn’t address its issue with as much finesse.

Ultimately, it feels as if Alzheimer’s was included just to create a unique setting or for marketing purposes. The illness did not play as big a part in the film’s writing, barely affecting Liam Neeson’s behavior or decisions, which really feels like a missed opportunity. The film takes place in Mexico with a gritty, run-down aesthetic. It’s nothing we’ve never seen before. While the setting and the film’s visuals does the job of communicating what’s on screen to the audience well enough, I’ll be hard-pressed to describe Memory as “beautiful” or “a cinematographic work of art.”

The same goes for the sound. While the score and music succeeds at building atmosphere, ultimately, the film’s sound feels like any other action blockbuster—mediocre.

Just like The Lost City which I’ve reviewed last month, Memory is carried hard by the leading star. I’m surprised Liam Neeson’s back hasn’t broken from carrying the film pretty much on its own, but thanks to that, it’s still worth a watch for his fans. If you love Liam Neeson, do give Memory a watch, but if you aren’t, then you’re in for a forgettable experience, pun intended. Gotham Knights Will Have Offline Single Player Without Microtransactions

Apex Legends Mobile will launch this May

Apex Legends Mobile will launch this May