Marvel’s Midnight Suns is rising on the horizon for the rest of the world, for another chapter in a prolific media universe. Following playing the game itself – full review here – we also had the opportunity to get an email interview with Jake Solomon, Creative Director at Firaxis Games, about working on the title. Read on!

There’s definitely a focus on the story and characters with all the conversation and friendships. How was it writing these characters considering their various incarnations over the years of Marvel?

JAKE SOLOMON: It was a lot of fun and such a huge honor to write dialogue for these heroes, many of whom we grew up reading in the comics as kids. One of the great things we had going was that for Marvel’s Midnight Suns, we have our own universe – so our Doctor Strange is our Doctor Strange and our Iron Man is our version.

That said, we still wanted to make sure longtime fans feel at home with our characterizations of the heroes, so there’s a lot of thinking that goes into writing the dialogue where it works whether you have been reading since forever or if you’ve only seen a movie here and there. From a story standpoint, why did you decide to make the Light / Dark balance choices ‘obvious’?

JAKE SOLOMON: We err on the side of giving the player more information versus less – Marvel’s Midnight Suns is already such a huge game with so many systems and a lot of dialogue. Ultimately players would have figured out and tracked the responses anyway too!

Was it difficult to insert an original character into such a rich universe?

JAKE SOLOMON: It’s difficult in the sense that The Hunter has to really feel like a hero that can stand on their own, stand toe-to-toe with giants like Iron Man and Captain America… but also be relatable, be able to connect with their fellow heroes.

Part of that is made easier because The Hunter is not a blank slate – they have a backstory, they have a legend to them already that helps justify to other heroes why they lead and make decisions in this battle against Lilith. How was working with Marvel like to craft the narrative, characters?

JAKE SOLOMON: Marvel is an amazing partner who really supported us every step of the way. We never really ran into any moment where the answer was “absolutely not” – they always had really helpful feedback, especially around getting the characters right, whether through dialogue to even posing!

How did you decide on the card system? It’s quite a departure from XCOM, isn’t it?

JAKE SOLOMON: When we started work on Marvel’s Midnight Suns, we had the intent to do something like Marvel XCOM but quickly realized that many of the mechanics from XCOM didn’t really fit that well with the idea of Super Heroes. Heroes don’t take combat right? So we remove cover – and they don’t miss punches, so we remove hit percent chance. And we’re telling a specific story with the game, so we don’t have permadeath either.

So when we took out each of these systems, we ended up with something that didn’t play very well and knew we had to go back to the drawing board. And so we think about what tactics games really are at their core – they are a puzzle that is endlessly interesting, where the player has to have interesting choices at every turn. We do this through randomization, and in XCOM this was done through percentage hit chance. 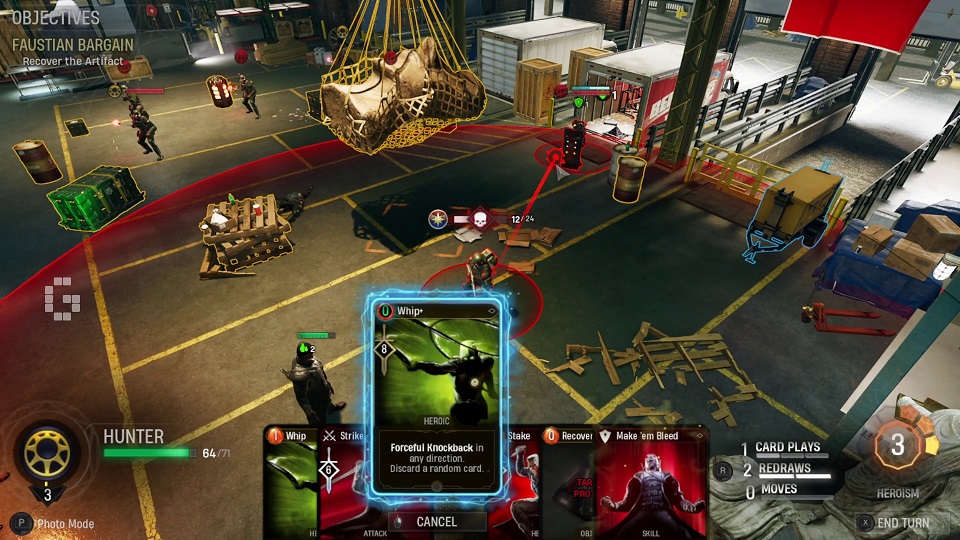 So what is another way we can do randomization? Cards! What’s great about cards is that they’re a mechanic that many people are already familiar with. Most of us understand that you “draw” cards at random, and any mechanic that we don’t have to teach players is worth its weight in gold.

So in that way, combat in Marvel’s Midnight Suns with cards is the opposite of XCOM. In XCOM, you always know what abilities you have at your fingertips but you don’t know if they’ll connect. In Marvel’s Midnight Suns, you never know what abilities you have the next turn, but once you have them they always work. Ultimately, I think this new system still scratches the same tactical itch that XCOM fans know and love.

How was it balancing player choice to ‘mandatory’ story missions, namely, gameplay and story integration?

JAKE SOLOMON: Overall, we designed the story flow and gameplay systems so that you can really play Marvel’s Midnight Suns at the pace that you want. If a player really wanted to, they could beeline through the entire story without touching any optional content, doing zero extra Hangouts, clubs or anything else. We also don’t have any type of doomsday meter so if you wanted to, you could just grind general missions over and over again so that you can build out your perfect ability set or get all the upgrades before the game ends.

This goes back to one of our core game pillars for Marvel’s Midnight Suns, which is to make it a very accessible game for players where you have a lot of freedom to play how you want, from a combat level to just generally your playstyle.

JAKE SOLOMON: It’s hard for the team to believe that we’re finally here, but we are so excited to finally be bringing Marvel’s Midnight Suns to the world on December 2. Thank you to everyone who has supported us throughout the years.

Thanks to Jake Solomon for answering our questions! There’s plenty to look forward to in Marvel’s Midnight Suns especially for the lore nerds and the tactical strategy enthusiast, so step into the boots of the Hunter and save the world alongside your favourite heroes.