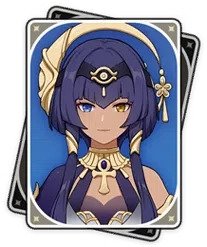 Candace, the Golden Vow, is a 4 star Hydro Polearm character that is featured in the first half banner of the 3.1 Update in Genshin Impact

Candace works as an off-field Hydro support or even as an on-field DPS as her main gimmick comes from her Elemental Burst that not only infuses active character with Hydro, she also provides bonus Elemental damage on the infused normal attacks.

Her Elemental Skill is called Sacred Rite: Hero’s Sanctum. The skill comes in two versions, a tap and a hold.

For the tap version, Candace pushes her shield forward to deal Hydro damage in front of her. As for the hold version, it comes with a charge and it fills up as you hold for a maximum of 6 seconds. While charging, Candace will create a barrier that absorbs incoming and how much it absorbs scales with her maximum HP.

Candace will then perform a leaping strike that deals Hydro Damage when you release the button after finishing charging, the skill duration ends or when the barrier breaks.

Her Elemental Burst is Sacred Rite: Wagtail’s Tide. Candace will deal AoE Hydro damage and will continuously confer the Prayer of Crimson Crown on your active character.

Prayer of Crimson Crown lasts for 9 seconds and it not only infuses Hydro into Sword, Claymore and Polearm users but she also increases the value of Elemental damage the active character deals with their normal attacks.

Her Burst also has a secondary effect where it deals Hydro damage in a small AoE every time you swap characters for a maximum of 3 times.

Her passive is Aegis of Crossed Arrows and what it does is that it instantly charges the hold version of her Elemental Skill when she is attacked mid charging.

Candace’s second passive is Celestial Dome of the Sand and it further increases the values of Elemental damage from the normal attack of the active characters scaling with her HP while under the effect of her Prayer Crimson Crown.

Her adventure skill reduces stamina consumption when climbing, something she shares with Xiao.

Noblesse Oblige works best if you are going for off-field support build as you would not only increase the Elemental damage of the active character upon casting Candace’s Elemental Burst, the 4-piece bonus from the artifact will also buff up the entire team’s Atk%.

Any Catalyst users’ benefit being paired with Candace as while she would not infuse their attacks with Hydro, the increased value of Elemental Damage from her Burst and her second passive still remains.

Candace’s main strength comes from the Elemental buffs she provides from her Elemental Burst and her passive. Not only would Hydro characters benefit greatly from both, characters with Elemental infusion that cannot be overridden can also take full benefits from her support and this applies to Catalyst’s users as well.

The barrier she forms on her Elemental Skill can also provide a moment of respite as it has decent multipliers scaling from her HP with a max duration of 9 seconds which is enough time for her Burst to be up.

Candace’s strength is also her main weakness as a support. Her Hydro Infusion in her Elemental Burst means that unless your active character specifically mentions its infusion cannot be overridden (example Hu Tao and Cyno), they can only gain Elemental buffs from her passive.

DPS Candace also suffers from her scaling with the choice of either choosing between HP or full on ATK% for her build. Go full HP and you would suffer with lackluster damage outside her Elemental Burst while full ATK% means you would not be able to fully maximise the buffs from her passive.

Her support from both Elemental Burst and passive is also strictly Elemental so physical characters like Eula would not benefit even the slightest from having her in the party.

Conclusion: Should you pull Candace or not

As always, if you generally like Candace then you should pull for her. You could go no wrong pulling for characters you like.

However, for those still thinking about it, you should pull for her if your main DPS is Hydro element or characters like Hutao whose Elemental infusion cannot be overridden as the buffs she provides is immense.

For Eula mains, Razor mains or the unique Physical Keqing mains, Candace is an easy skip as she does not provide any sorts of buffs for physical damage as she is strictly Elemental. Candace is also a 4-star and she will be in the permanent roster once her banner ends so she can spook your pulls anytime.

Spiral Abyss wise, she can slot in as your support for your Elemental team or even your sub DPS as she can provide decent enough damage while waiting for your main DPS to be ready even when built as a support.