Revel in the feeling of realizing that Grand Theft Auto III marks its 20th anniversary today! The Grand Theft Auto The Trilogy – The Definitive Edition is also coming right up for players to bask in the classics that grew the franchise to what it is now. In commemoration of the occasion, Aaron Garbut, Head of Development, Co-Studio Head of Rockstar North, has answered a few questions about the title.

Grand Theft Auto III was a turning point for the franchise as it moved from top-down to fully-3D environments and non-linear gameplay. What challenges came from this evolution?

Moving into 3D changed the immersion of the experience – suddenly you were in this world, not above it.  This changed so much about the way we had to look at making the game.  We needed a world that was far more detailed, that you could see right into the distance, that you could interact with up close and personal.  It shifted expectations about how cinematic and connected we wanted it to be, and it moved us away from some of the super gamey elements. 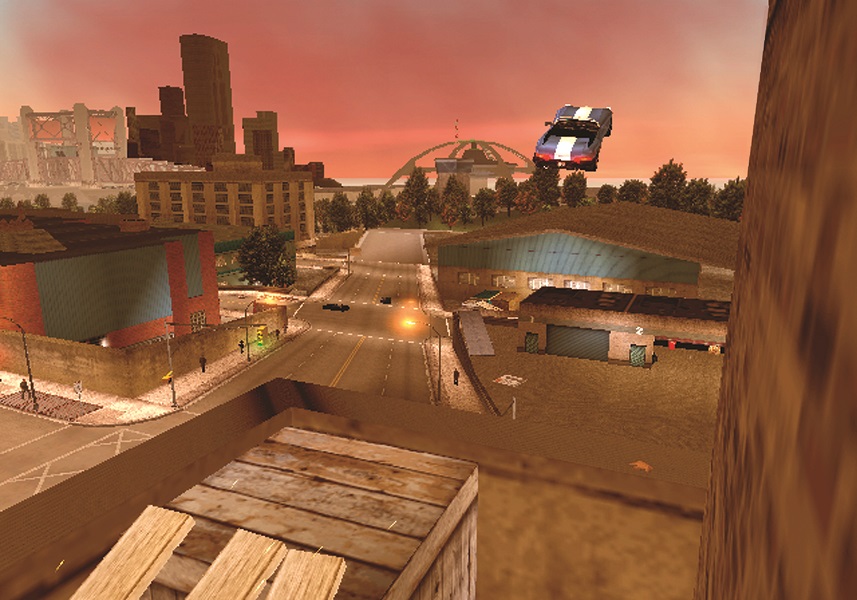 To do the kinds of things we wanted to do, we needed a physics engine that would give us more connection of the vehicles to the world and the objects within it.  We wanted to ground players in the experience, triggering missions in person, talking to people from where they lived and worked.  We wanted to give the world height and to play with that height.  Some of these elements were there in 2D games, but the distance and the top-down perspective allowed them for them to be far simpler. The shift into 3D meant we had to reconsider how all these disparate parts would come together since players were ‘in’ the world now, not just looking down upon it.

Challenges were everywhere. This was at a time where things like third person cameras and aiming were still being ironed out in games, where building something at the scale and detail we wanted while being able to move around it freely at speed just hadn’t been done.  We were building something unprecedented in scope and scale with this level of openness.  How do you get this to fit in memory, how do you render a few kilometres away, how do you even get in and out of all kinds of vehicles in 3D?  What I’m most proud of is that we worked out what we wanted to do, what we thought would be best, not what was easy.  We gave ourselves a lot of difficult problems and not only did we start to solve many of them, but we started to see for ourselves a very powerful vision of what we wanted to do well into the future. GTAIII also featured an elaborate radio and musical component, far more than previous entries. What went into the creation and curation of the musical aspect of the game?

As we began to see how we wanted to immerse the player in the world, to be able to interact with the world and its characters from ground level, this started to inform how the teams saw the entire world. As the player’s experience with the vehicles deepened, we had to elevate the other aspects of the game to meet this new reality. The music and audio teams were helping to build this new, more immersive space for the player and the music and talk radio stations took the experience of the world to new heights. Whether it was curating existing music like the classical of Double Clef or 80’s pop of Flashback – or even writing songs in-house specifically to suit some of the stations, GTA III’s approach to music was a turning point in the series and something the team have only continued to evolve ever since.

Are there any aspects of GTAIII’s development and design that have remained important to Rockstar all these many years later?

GTA III helped clarify our approach to making games, and it’s something that has stuck with us in every game we make, from GTA III through to GTAV, the Red Dead Redemption series and everything else: we are focused on building worlds – and on making these worlds as believable, detailed, interesting, varied and alive as possible.  We want to make worlds that you feel like you are living in, that feel dynamic and filled with other characters.  Where it’s not just a façade that comes alive around you and for you, but as real a place as we can manage, and one that is filled with stories, characters, events and fun, interesting things to do. We want these worlds to be intrinsically fun – where you don’t have to do any one thing, you don’t have to play the game a specific way, or even experience the story unless you want to.  Instead, you can just… be.  Where the world itself is alive with choice and just messing about in it is as valid and fun as tackling a mission – where, in fact, the lines between what is messing about and what is “core gameplay” blur.

Even as our ability to tell stories in these worlds has improved over time, we still want to ensure that the world will allow you to find your own path and your own story – where it’s as cool to hang out in a car listening to music and watching the sunset as it is to skid into a mission location, guns blazing.  Where the game can be whatever you need it to be.

So much of GTAIII feels iconic today. From the various characters, multitude of vehicles, music, humour, locales, not to mention the character artworks and logo style that would further define the series going forwards. Did it feel at the time like you were crafting something that would revolutionalise open-world games and leave such a mark in popular culture?

Making GTA III, it felt like the game we had always wanted to play, we thought it was very cool but really, we had no idea how it would be perceived.  We knew there was nothing else like it, but we didn’t know if people would feel the same way about it that we did – we just knew that we wanted to share that excitement with everyone else. I remember that we showed it at E3 and Rockstar’s other title, State of Emergency got all the attention. That was hard, but you regroup and use it as fuel.

Can you ever really know these things?  I think maybe you can feel when something is good, but it takes an alignment of the stars to make a mark on the world at large.  We are all incredibly grateful that people loved it as much as I did. 20 years after its initial release, what are you most proud of regarding Grand Theft Auto III’s legacy?

Prior to Grand Theft Auto III, games were a thing you played – an adventure you worked through or a puzzle you solved. GTA III made them a place you lived in.  We’ve been making that place more visceral and real ever since.  There’s a depth and permanence to that.  I remember playing a lot of games growing up, but I remember spending time in various GTA’s.

I’m proud of our team and of the path we have stayed on.  It feels like we built the foundation, the ruleset, the blueprint.  That we helped create a genre that others followed and found their own paths on.

I love open world games.  I feel like they have so much further to go than where they currently are.  I know that thanks to the success of all our open world games and the global team we have that has so many years of experience working together on them, that we are uniquely placed to push them further than ever and most excitingly of all, I’m confident we will.  There isn’t the same collective experience and knowledge, or the relationships built over this amount of time in one place anywhere else.  So, I think Grand Theft Auto III’s true legacy is still to come – I think we take big steps forward on every title and I’m always excited to see the next jump forward.  Grand Theft Auto III began the journey for us but we’re still only getting started. Grand Theft Auto V continues to be updated now 8 years into its life, and will be making the move to next-gen platforms in the coming year. There’s no denying that the game still looks to be popular, and if the journey has only just started, where do you think they will go from here? Is it time for a new Grand Theft Auto? Time will tell, while the classics remain as steadfast as ever.