Our Deepest Condolences to Simon's Friends and Family

23-year-old Simon George Konrad Hill-Williams from Cardiff, Wales has sadly passed away however his family has chosen to honor him with a favorite hobby of his, theming his headstone around a YuGiOh trading card. 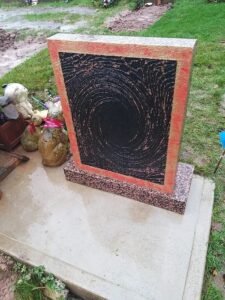 Simon’s card says that he is a seven-star dark card with 5000 attack points. The back features the traditional YuGiOh card black vortex-like pattern. The headstone states that Simon was a “Loving Son, Brother, Grandson, Partner, Uncle, and Friend”.

This is followed by a quote from Simon, “Come now, it’s not polite to leave… without saying goodbye“.

Update: Charlotte Ann Hill-Williams has informed us that this quote is originally from Jack of Blades from Fable, which was another of Simon’s favorite games.

Simon’s mother, Virginia Denley-hill also made a post on her Facebook page explaining a bit more about the choice for the headstone:

“I just wanted to say that my son was a huge YuGiOh collector, and so when he passed away in April of this year, it seemed only right his headstone reflected this.

It’s a huge stone and we are so pleased with it, as he would have been.

The Trickster King becomes a card himself.”

The YuGiOh card headstone was created by Thornhill Memorials in Cardiff. They actually made a post on their website explaining the design choices for the headstone in more detail.

It’s a sweet gesture that we’re sure Simon would have appreciated as a fan and collector of the Yugioh card game. We wish all the best for Simon’s friends and family going forward.