It’s no secret that we’ve really been into Diablo Immortal. Almost obsessively so, some might say. Of course, those long hours weren’t for naught, it was to make sure you, dear reader, could know as much about the Diablo Immortal Endgame as possible.

With that in mind, we’re looking at the Diablo Immortal Endgame Classes. Any mook can tell you that the Demon Hunter shouldn’t get into melee. But what if that changes after equipping several Legendaries? Can the Monk turn into a Punch Wizard? We’re about to find out.

Before we get into that though, there’s some disclaimers to be had. These notes are based off of the game’s Technical Alpha, so there’s very much a non-zero chance that things could change before the game’s final release. They also lowered the cap for the sake of the alpha to 45, whereas the final build of the game will have cap at 60.

Also, these experiences are entirely from solo play, so we don’t really have much to say about things like class synergy. Instead, think of this as more of a primer to what to expect if you just want to grind out some Elder Rifts real quick”. The Barbarian is one of Diablo’s most iconic classes, ever since they burst onto the scene in Diablo 2. Every game has attempted to capture the character of the Barbarian, one of power and offense and creating a powerful berserker.

In Diablo Immortal, the Barbarian shares a lot with its Diablo 3 counterpart. Unlike some of the other classes, Barbarians haven’t gotten any new skills per se, though several of their skills have been renamed after their runes from Diablo 3. 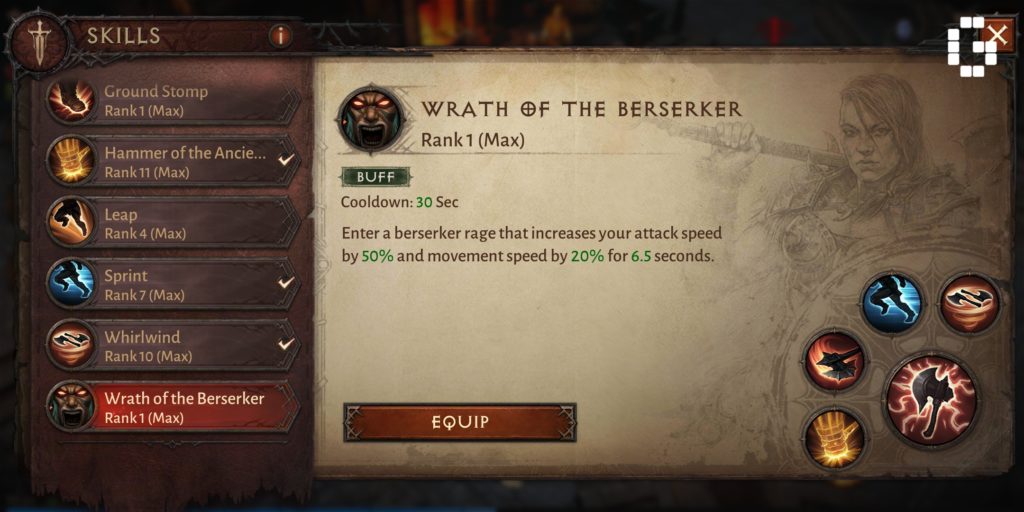 On top of that, the Barbarian can further buff itself with a plethora of skills to make them even deadlier on the field. Wrath of the Berserker gives the Barbarian a boost to speeds both attack and movement, with 50% for weapons and a 20% for their feet.

On top of that, there’s their Sprint ability, giving a whole 50% directly into their movement speed.

This is great for the Barbarian since you’re essentially able to adjust their stats to suit the current situation, either dishing out a flurry of hits to keep your health topped up, or Sprinting towards the next big fight.

On top of that, the Barbarian has some world-class Crowd Control, turning enemies into little more than fancy damage-number-dispensers. This is especially true of their ground stomp, which can stun enemies over a large area. If enemies are being too observant of social distancing, you can also use Chained Spear to pull them towards you, or Leap to slow them before they can get away.

If you like Diablo for the power fantasy, the Barbarian is a must-pick. Watch as some cool demons and monsters get reduced to helpless dummies, then wail on them with Whirlrwind, one of the best channeling abilities in the game. It’s a tried-and-true tactic with Barbarian, and it definitely still works here. If you like sick combos and big damage, the monk is a great choice. This class offers good burst damage, though at the cost of less-than-desirable AoE and crowd control. While many of its skills will be familiar to Monk mains from Diablo 3, the Monk has several new skills too to change things up.

One of these is the wave strike, a hadoken-like projectile that gives the Monk a bit of range. It’s a cool skill for sure, but it’s got a charge time to it making it quite situational.. There’s also Flying Kick, which gives the Monk a forward dash that also rewards positioning, by allowing you to rebound off of walls for more damage.

Imprisoned Fist is one of the Monk’s crowd control abilities, allowing you to stun enemies in a radius. With legendaries this can even be upgraded into a forward dash, basically giving it all the best parts of Flying Kick while also adding in its own crowd control. 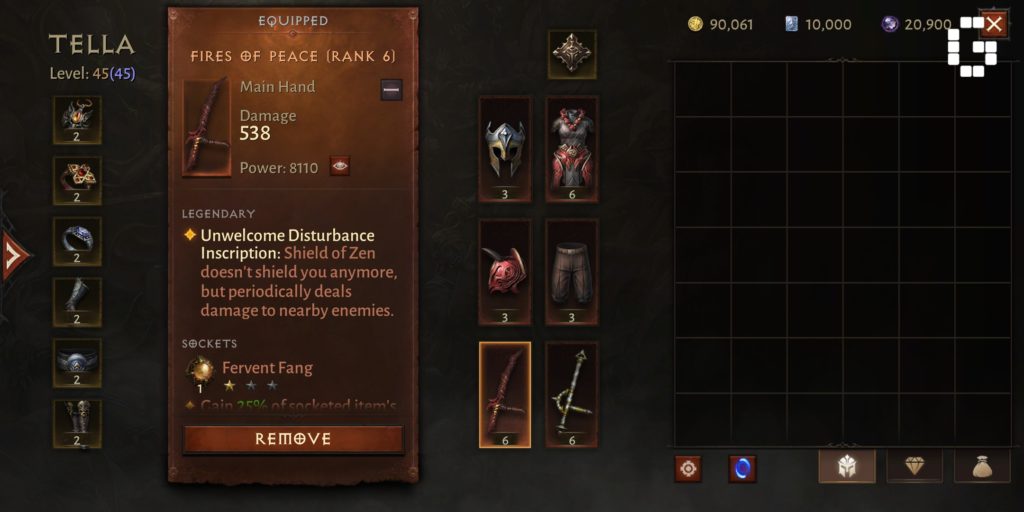 Finally you have Shield of Zen, which dramatically increases the Monk’s survivability by giving a shield to absorb damage. It’s still not as good as the Barbarian’s survivability with Lacerate, but it’s more like a good way to buy yourself just that much more time as you rack up some sick DPS.

Since there’s no sign of the Witch Doctor in Diablo Immortal so far, the Monk now has the title of best summoning class with its ability, Mystic Ally. Summoning your own doppelgangers, these can access their own monk skills, meaning you can increase the amount of high DPS characters in your group drastically.

The Monk is definitely a great pick for those who want to be rewarded for high skill, with moves like flying kick relying on positioning, while moves like Imprisoned Fist have invincibility on start up. What this means is that rather than readjusting your strategy to play defensively, masterful use of the Monk’s offensive skills can be their own defense.

While they’re great for taking on bosses, they’re a bit more Legendary-dependent than most classes as they need to fill in many of the skill gaps they lack due to being so damage focused. After all, the monk’s raw kit (unaugmented by Legendaries) makes using AoE moves quite situational. Moves like Exploding Palm need to be triggered first, meaning won’t get the “hit button get effect” satisfaction many other classes’ skills have. Of course, you could also fill this out by partying up with other players who might have better AoE moves. While the Monk excels at single-target damage, the Demon Hunter is a variable element, with plenty of skills to suit plenty of situations. In general the class is way more suited to offense, but the exact nature of that offense is entirely dependent on how you want to play them. The star of the Demon Hunter’s kit is their new skill, Crossbow shot. Unlike other Diablo characters who have to stay still to use their skills, Crossbow Shot allows the Demon Hunter to run-and-gun, keeping them mobile.

There’s also several other new additions to their kit in Immortal, like an Explosive Arrow for AoE damage, as well as a Knockback Shot to keep the pressure off of you. While not ideal, they also have a close-range attack, too. Daring Swing swipes in front of you, and also gives the Demon Hunter some invulnerability on start up. Personally I’d keep this skill for the invulnerability moreso than the damage, especially since the Wide Shot is also a great single-target burst when used point-blank.

On top of that, you have skills like Vengeance and Strafe returning from Diablo 3, giving the Demon Hunter way more damage options. I’m particularly fond of strafe, since it’s basically “Whirlwind, but with guns” and is great for when you’re really in a pinch.

Overall, it’s a great offensive class, with enough skills to be either a great AoE or single-target damage dealer. Combine that with your run-and-gun skills and most bosses should be dealt with with ease. At first glance, the Wizard has one of the more underwhelming kits in the game. From a raw damage perspective, the Wizard needs a lot more work to be doing boss-melting numbers.

But that’s not to say it’s entirely weak, rather, the Wizard is built on a more interesting playstyle based on synergizing all their skills. Here’s some of the Wizard’s new skills in the game: 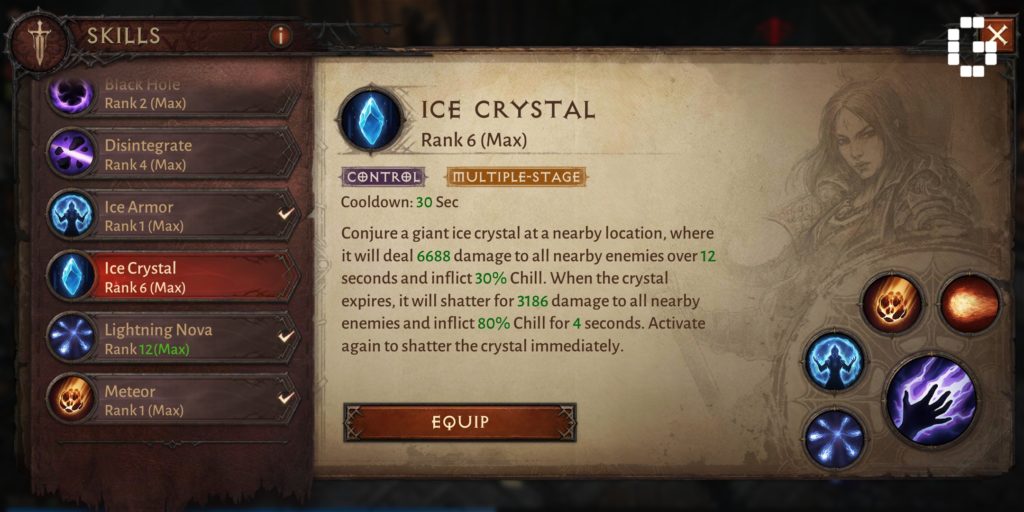 For example, Scorch can inflict enemies with a burning status effect, which Arcane Wind can then boost its own damage off of.

On top of that, one of the cooler interactions you can get is using the Ice Crystal. By firing the Wizard’s beam based Ray of Frost or Disintegrate skills, the crystal will refract it, spreading the beam’s effect over a large group of enemies.

It’s a cool gimmick, though personally I wish it didn’t also lower the damage of the individual beams. It bleads into the Wizard’s main problem, which is that while it’s a class of cool ideas, it doesn’t have the raw damage to back it up, leading it to be less interesting to those who want to also do big damage.

There’s also the case of the Wizard’s kit causing it to tripping over itself. Since skills have specific elemental interactions, you’ll obviously need to pick your skills based on what interacts with each other best. Ultimately, this leads to a lot less build diversity for the Wizards if you want decent damage. There’s a decent amount of builds, but I can easily see many comments complaining about them only having one or two ones that are actually useful. Finally, the Wizard’s Legendaries are less interesting, and feel more like lateral upgrades instead of big spikes in power. Many of these mess with the elements of the Wizard’s spells, allowing for soft crowd control options. However, due to their weak AoE, they don’t really have many ways to capitalize off of their own abilities.

There’s also the Wizard’s channeling abilities, which are a lot of fun. Like everything else related to the Wizard, they come with a bit of an asterisk as you’re a sitting duck the entire time you do these.

That’s kind of the problem with Wizard in macrocosm- the class has some of the most fun gameplay mechanics out of all of those in the Technical Alpha so far. However, for whatever reason, it feels over-balanced to the point that it almost feels like the game thinks if its both fun AND good it’ll somehow break the game.

With the Diablo Immortal Technical Alpha coming to a close soon, there’s no telling how relevant this information will be when the game launches. After all, there’s been quite a bit of fan feedback on the game, and Blizzard can be quite receptive to these things.

Still, it’s cool to see how diverse they’ve made the classes play out in the Diablo Immortal Endgame, with a distinct playstyle for each of them. It’s really cool how many Legendary items are built around affecting specific skills, changing them enough to make some interesting subclasses.

Now if you’ll excuse us, we’re going to get in some more time before the Alpha closes.

Give us some support by subscribing to our Youtube Channel !
Tags: Blizzard EntertainmentDiablo Immortal
ShareTweetShareSend
Previous Post

Insilentium, a new mobile CCG, is open for beta testing

Insilentium, a new mobile CCG, is open for beta testing