We’ve managed to acquire access to the Technical Alpha of the all-hallowed, for phones, Diablo Immortal, and there’s plenty to unpack. For further reading, you can check out our previous articles on the game:

Let’s get right into it!

We must stress that the build we played is a technical alpha version, so it’s not the final version of the game. The level cap is 45, but it will eventually go up to 60 in the full build along with opening up more zones. The graphics settings aren’t the most robust ones, offering presets at Low, Medium, High and Ultra, with the option for High FPS. Presently, there are four classes:

You can choose to play as a male or female character, with accordingly flashy and unique class selection animations. Their stats differ from what you may recognize from Diablo 3. For a more streamlined mobile experience, the mana cost for skills have been removed, instead using cooldowns. All four of your skills will be on the right side of your screen, with movement controlled by a virtual joystick on the left. If you’ve played other mobile ARPG offerings, or even MOBAs, this control scheme should be familiar to you. If not, it’s easy enough to pick up so don’t worry too much about it. With the absence of a MP system, skills will use their own unique resources where applicable. They also have ultimate abilities!

All in all, the UI is pretty clean, and doesn’t obstruct much of your view, while generally keeping the information easily readable. Learning which icons or colours represent what may take some time though, like that of affixes, depending on the person.

WHAT OF THE STORY? Lore enthusiasts will want to know more, considering how Immortal is set after 2, but before 3. Baal makes his appearance, representing the prime evils. Too bad the Horadrim seal the nice demon after the Dark Exile. Besides Baal, you’ll find a few other prominent bosses from the series also saying hi, like Blood Countess and Leoric. The story is short in its current state, but it’s enough to give the idea of the evils busy playing their own game, as many figures try to vie for power and dominate Sanctuary. Zultan Kulle and Tal Rasha will also enter the scene, both in their prime, especially Tal Rasha decked out in his iconic gear. In this Technical Alpha build, you can clear the available story in just a day, so not very long. The core gameplay is what you will know: do quests, follow the story, and run around smiting hostiles as you pick up loot. Your favourite Treasure Goblins are in the game, though so far we’ve only encountered the gold-only variant. Cursed chest events return, where you kill enemies within the given time limit to get another chest. It almost feels that doing anything in the game can give out rewards, though these activities are character based, so any alts you have will need to run through them again. There’s no gear durability – hurrah! – and upgrades for one piece of gear can be passed on to its replacement, so it’s not too big a hardship to improve pieces you find. Enemies will drop a variety of different globes, from health globes for HP restoration or quickening globes and its ilk, where they provide temporary buffs. Considering how potions in this game are not instant health restorations, and instead give gradual regeneration, having these health globes or anything to drop could be the difference between winning or losing encounters. Shrines are also present, providing similar globe buffs, but over a longer duration. Likewise, killing monsters will add to your Resurrections Stone charges; these don’t deplete charges if you die in a rift. The enemies are on the smarter side too, with ranged enemies keeping their distance and may even try to run when you approach. You might come across phantoms that will also teleport away if you get into range. Every area has their own approximate recommended level, but spawns will be kept to your level. Should you hit the level cap of an area, the enemies that spawn will be 2 levels below yours so that you still can earn some decent loot.

If you come across Elder Rifts, you’ll have to defeat the guardian or else you’ll get no loot. You can meet other players in the game besides PVP which exists in the game, and you’ll see them wander around. With the limited technical alpha access, it’s more difficult to find another random, but this should change on release. If they attack any monster, that creature’s name will be greyed out, so that you can’t try to kill steal it or get its drops. That’s fine and all, but it also means there’s no particular incentive to help others besides your altruistic nature. 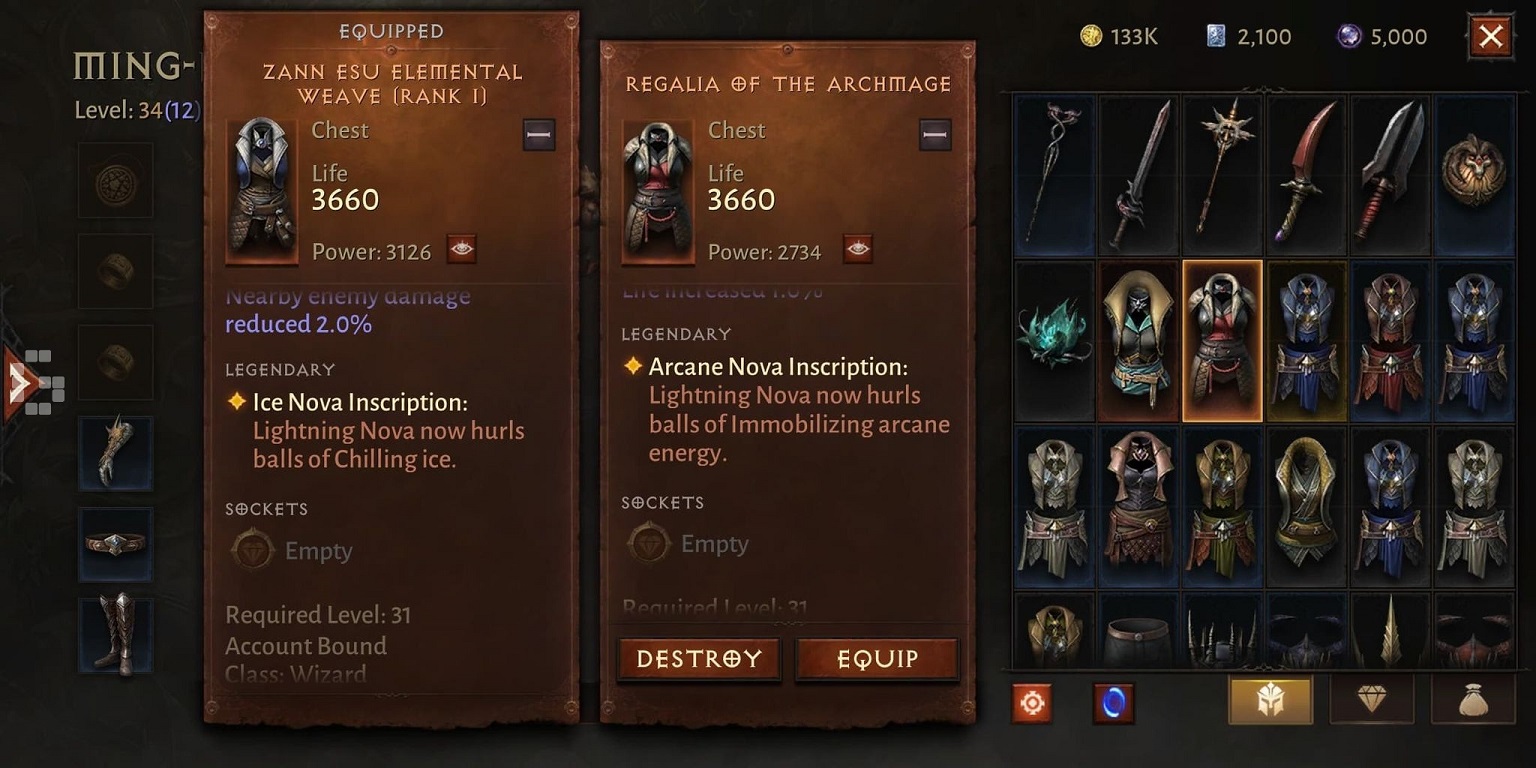 The looting itself is pretty convenient, with chests spawning next to you on quest completion. Any gear that drops will always be one of your class, so one layer of RNG is removed when you want to hunt for equipment, and hunt you will: the legendary drop could vary wildly depending on how lucky you are that day. You don’t need to shell out any money for this!

Even when you do get a sweet piece of loot, there’s no transmogrification right now, so no catwalk now. Besides, gear selection is also more rigid in this build: monks and barbarians can only dual wield, with no option to equip a shield, and certain weapons are only locked to either mainhand or offhand, with no swapping allowed. Equipment aside, you can rank up skills up to 13 in this technical alpha. Some skills can’t, but this should be gradually introduced as the game gets closer to launch.

Legendaries available in the game right now are refreshingly ‘straightforward’ so as to speak, as there are less variables to the stats you obtain, giving a fixed bonus instead of rolling the dice between a 150% to 200% bonus. They do come with the potential to completely change the way how your skill works, like a regular tap spell could become a channelling one, or adding an AOE effect. There’s build variety awaiting players who get their hands on some shiny loot! Your characters will all share Paragon levels, but stashes are character locked, so no handing over of loot to an alt. Premium currencies are shared among all characters, but not in-game gold, which is fair enough. For one, Diablo Immortal might challenge Genshin Impact to be one of the more demanding mobile games out there. Experienced Diablo players would want to round up enemies in a large pack and eliminate them all with AOE spells for the most efficient farming which is fine on PC, but a lower-specced phone may find it difficult to render all the effects to result in performance issues. In higher difficulty rifts, that FPS drop could spell your character’s demise if you get hit when you’re unable to respond. As with Diablo 3, some legendaries can make or break skills or builds, and each class has their own distinct flavour to give them identity. We’ll have to see how they implement new classes, be it ones you’ve already seen before or completely unique ones. The technical alpha was as such there wasn’t a need to spend any money on the premium goodies: just put in the time, and you should be able to get to where you want to be. It’ll definitely be a much longer road than if you pay, when you’re going to roll for legendary affixes and charms, but you’ll be able to see exactly where and how your character grows over time. Hell 2 for now is, appropriately named, hell, and can get your character killed in just a few hits. Fun times. Make sure that gear rating is up to snuff! The devs go into more detail about the itemization in the game here. The way the Blacksmith works in the game makes it a little easier on your hunt for the perfect stats, as you can change the Bonus Attributes on an item through the Reforging system. You can game the RNG just a little bit better, which is pretty nice.

The alpha itself is already pretty great, perhaps even better than initially expected, so it’s certainly one to look forward to. The technical alpha shows no apparent signs of predatory monetization, so there’s at least something to be relieved about. Should there be a wider testing opportunity, be sure to try it, and you might be surprised at what you’ll find. It’s going to be a long, long road to greatness, but you will get there, the Diablo way.

We’ll continue enjoying the alpha while we wait for the full release!