by Lucas
in All, Reviews, Tech
Reading Time: 6 mins read

The ASUS TUF Gaming F17 is one of the many laptops that were announced during the CES 2022 event, here is our review on the laptop to see how it fairs with other gaming laptops that are in the market right now. The build for the ASUS TUF Gaming F17 is more on the hefty side with it having the measurements of 39.5 cm wide, 26.4 cm deep along with the thickness of 2.54 cm. Needless to say, the hefty build adds in to the overall weight of 2.6 kg, meaning to say that the TUF Gaming F17 is on the heavier side which can be troublesome for users who like to carry around their laptops to different places.

But on that note, the one thing I like about the laptop is its industrial feeling that the design has going with it. The four corners at the top of the laptop have this screw-like design which the overall aesthetic is pleasing to look at for me. Every surface on the each side of the laptop besides the keycap and trackpad has a matte finish to them, but it’s the coarse-feel which I honestly dig. It also means that your palm and fingerprint marks will less likely be left on the material. On top of the keyboard, there are four LEDs that are arranged in a way that is shaped out like an “X” and the LEDs also shows the status of the laptop like when it’s charging or in airplane mode. The shape of the lid of the laptop is not a perfect rectangle and the web camera part on the laptop is protruding outwards. Regardless of how it looks, it doesn’t quite matter to me because it helps me with opening up the lid so I’m cool with that. Although it does need you to hold down the laptop chassis to open up the lid, meaning that it requires both of your hands. 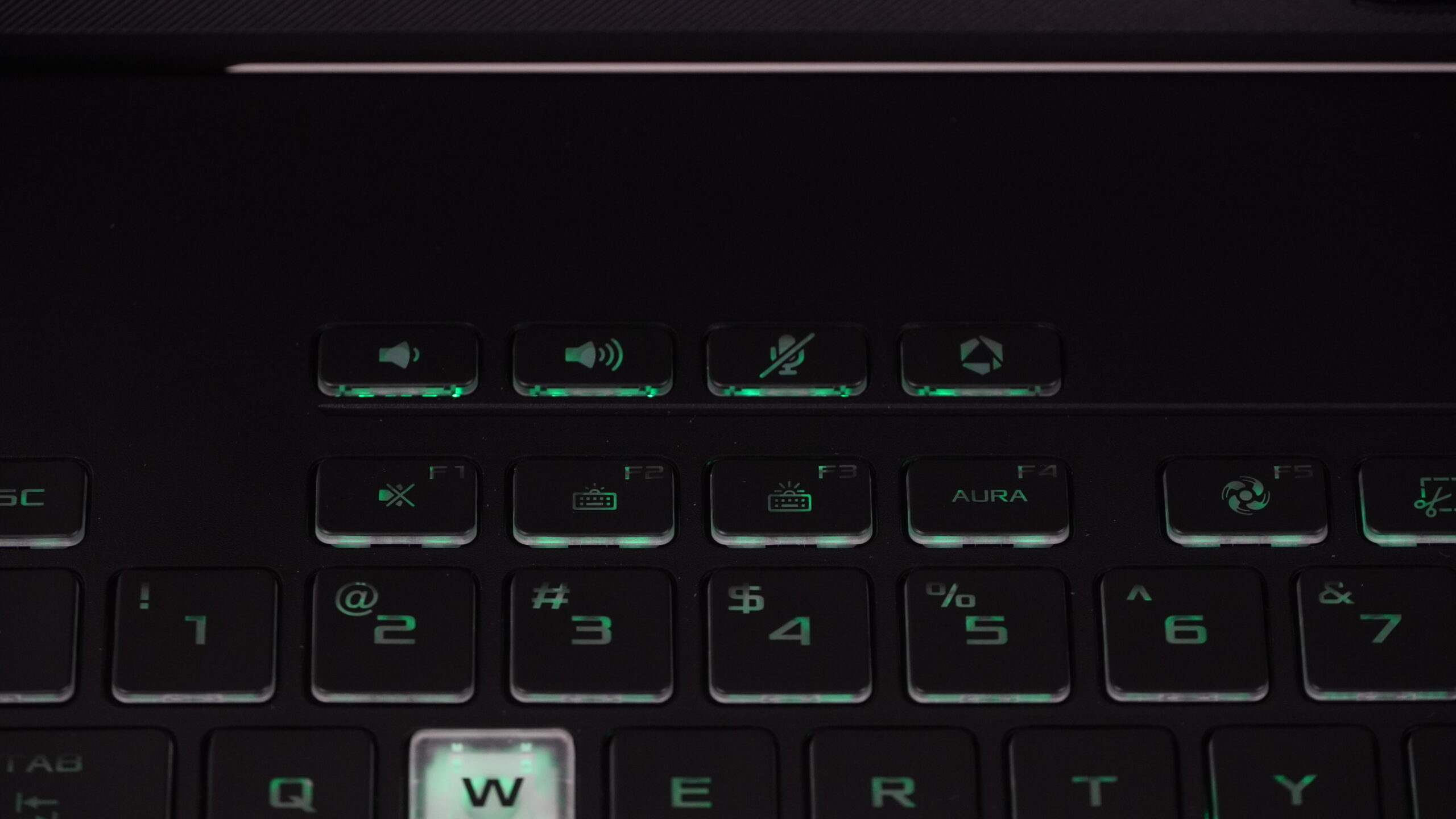 The keyboard on the TUF Gaming F17 offers a lot of neat features to it, the 1.7 mm key travel distance is pretty nice for the general users, and typing on the keyboard is pretty quiet too, along with the feedback for it is good.

But the drawback for the keyboard for me is that I found myself needing to punch in the keys in order to input, meaning that I had to press down the keys harder than usual, which leads to having tons of typos with all the missing inputs that I thought had been inputted. I find myself having to slow down and put in more force to each push of the keys down which can be very exhausting for people who don’t particularly like tactile switch keyboards, which this keyboard somehow feels like it. In terms of the design for the keyboard, the WASD keys are semi-transparent, which is also a feature that was present in previous TUF gaming laptops. It’s also an RGB keyboard but there’s only a handful of colour options for the RGB effects. It’s also a single zone RGB which means that you won’t be able to make a rainbow effect of RGB colours flash through the keyboard.

The trackpad of the keyboard is also pretty huge, and it also has the TUF gaming logo on the top right corner of the trackpad. The trackpad is also off center so that when you’re typing, you won’t have to rest your palm on top of the trackpad. It’s also really smooth and pretty responsive which is an added plus. The TUF Gaming F17 has a 17.3″ FHD IPS panel that has an aspect ratio of 16:9, which means that it’s a 1080p display. The refresh rate is at a 144Hz which is decently high, and it also has a MUX switch and supports AdaptiveSync which is pretty cool.

Although, the sRGB is only at a 62.50% which can be a deal break for most people, but I personally don’t really put much emphasis on it. While the colours are less vibrant than what you’d normally see, but it’s not too bad. But unfortunately, the difference between the lowest, mid and highest can be pretty noticeable, which is something worth noting.

The audio performances for the TUF Gaming F17 is pretty good. The audio really heightens the experiences when watching a show or a movie and while the audio is loud, it doesn’t diminish the overall sound quality. While I still would use headphones when using the laptop, the stereo audio for the F17 is still pretty serviceable. There’s two types of battery specs for the TUF Gaming F17, the one that we received is the 56Whr while there’s also a 90Whr version. The battery life for the 56Whr is relatively decent if you only use it for light usage. During my time of 1 hour and 40 minutes, the laptop’s battery went from 100% down to 24%, which can be seen as really fast but I had the brightness up to max and had the laptop on Balanced mode instead of the Battery saving mode which needless to say can affect battery life. The armoury crate is the central hub for everything gaming and laptop settings related. You’re able to monitor the performances of your laptop here, as well as changing the operating mode in the home page. You’re also able to change some of the RGB effects for the keyboard through the hub too.

You can also manually overclock your GPU here as well as changing the MUX Switch settings. I recommend switching it to discrete GPU as it’ll help out your usage of the TUF Gaming F17 by a lot. The game actually runs pretty smoothly, on the highest setting without DLSS, I was getting above 50FPS. While with DLSS on, the laptop pushes through the 70 FPS but it does fluctuate between 70-90 FPS, while the FPS is good, it’s not stable. While playing through Stray with the highest graphics, it averages out above 100FPS while having some occasional dip to below 100FPS.

At the highest setting, the framerate fluctuates between 70-90FPS, similar to when playing Ghostwire:Tokyo but there’s no sudden frame drop which is pretty good. The TUF Gaming F17 does a reasonable job as a gaming laptop. While the CPU that this laptop has is an extremely good mid-range CPU, it’s shadowed by the fact that it only comes with 8GB of RAM. While it does run the games fine, it can be a lot better if it has a 16GB RAM configuration instead. If you’re planning on getting this laptop, you should consider getting an extra stick of 8GB RAM to upgrade it.

For those who are interesting in finding out more details about the laptop or wish to buy, do check out the official product page here.