by Kit
in All, PS4, Reviews
Reading Time: 10min read

We’re just a week off from the official launch of The Last of Us Part II. We hope you’ve read our initial impressions of the game, along with an interview with the game’s co-director, Anthony Newman, right here. We’ll be diving deeper into various aspects of the game, but still not referring to any story beats, so this review remains spoiler free in that respect. Let’s get started. HOW WE GOT HERE

TLOU Part 2 has gotten plenty of improvements to the first part, which launched back in 2013, seven years ago. It was the last big game for the Playstation 3 console. And well, what do you know, Part 2 is out 2020, the launch year for the Playstation 5, heralding in a new era. Funny how that works sometimes.

The Last of Us saw us following Joel at the beginning of the end, and him making do in a world turned upside down by the Cordyceps fungus. He gets tasked to smuggle Ellie out to a group of Fireflies hiding out beyond the quarantine zone, carrying with him a hope for a cure in the immune Ellie. In retrospect, the fact that that hope is quashed because of Joel refusing to have Ellie sacrificed for “the greater good” might’ve set the tone for Part 2‘s undercurrent of vengeance… As mentioned previously in our first impressions, the characters look incredibly realistic and their emotions really coming through raw, thanks to the work put into the graphics. If you weren’t in front of the console or screen, people would probably expect it to be some live action movie with the level of detail and realism these character models have. If you really go looking, you can even spot armpit hair, which makes sense really: when you’re in a world where you can probably die at any moment, the idea of shaving seems pretty unnecessary. Those infected aren’t gonna compliment you and go “yass gurl smooth”, you know? But uh, anyway. 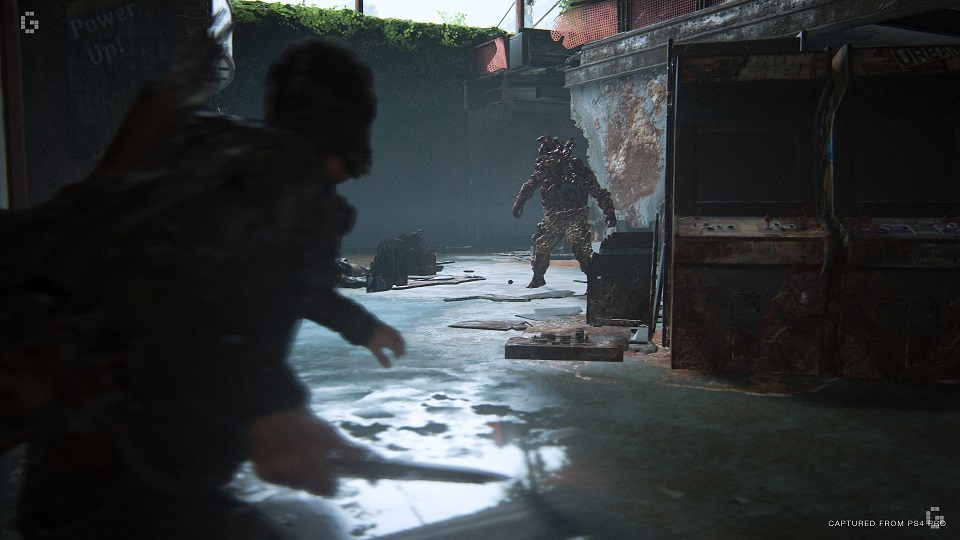 You already know how the story’s impacted us emotionally, a free pass to wrench your heart out of your chest. Be sure to check whether you’re still breathing during the game, because a journey awaits you. So, you’re off on an adventure, one in a not very rosy world. Infected and puzzles will be in your way as you work through the tangled webs of plot threads. Puzzles typically only need your “common sense”, but there’s no worries if you happen to short out. Hints, or even direct answers, will be given to you after a certain amount of time to help you move on to the next area. You’re not punished if you happen not to be able to solve it. I understand some might turn their nose up at this, thinking it removes the “challenge” of the game. You do need to wait around for it though, time that might be better spent exploring. With such a rich story awaiting you, it’ll be a damn shame some puzzle becomes your road block to know what happens to Ellie. You’ll be able to utilize ropes in solving these puzzles, pretty much expanding your options, by throwing them or climbing them as needed. Ah, yes, the infected and the human enemies. Upgrades are a thing in TLOU2, but you can also 100% clear the game without any. Upgrades naturally make things easier for you to take down your flesh obstacles (mushroom obstacles?). Materials for upgrades – namely the screws and supplements – will be lacking, and you won’t be able to upgrade every single item. Choose whatever you’re most comfortable with, because you’re going to be sticking with them for a long time. You will have survival skills to complement your upgrades, with a total of 5 skill trees. Only the first one will be unlocked at the start, and you’ll have to find survival guides or magazines to get the rest as you play. Obtaining some of these will require you to solve puzzles, while others will see you explore the optional areas. These trees can open up new crafting items, typically ammo. You can argue these other trees are optional considering their methods of acquiring them, but you might as well take your time to look around this gorgeous world while you scavenge for any advantages you can get. Almost all weapons you can find can be upgraded, with one exception. You’ll need to make your way to a workbench to jig up your arms, besides having the materials on hand. You can install a scope, have it hold more ammo, increase damage or fire rate on your weapon of choice, depending on what the weapon actually is. As you’ve seen from the release trailers and reveals, there are new enemy types that you’d likely want to upgrade your weapons for. There’s quite a few types who will be in Ellie’s way: Your other buddies like Bloaters and Runners are still around in mostly the same incarnation as their TLOU counterparts, but in general, the infected are harder to run away from, so your stealth tactics might take a hit. Bloaters can already feel like damage sponges – or mushrooms? – with how limited your supplies can get, but they have even more HP now, and a devastating charge attack. What a double whammy!

Then there’s stage 6 infected. I sure wonder what game I’m playing… did someone import in a model from Resident Evil? In any case, Ellie’s roaring rampage through the world leaves her plenty of options to murderize her foes, even if she may not always have the supplies to do so. You can leave no man or woman left alive, but you also don’t need to make the human race extinct yourself.

You can go in, guns a-blazing (why tho) and fire at everyone if you’re feeling reckless or confident and you’d more than likely die first. You can slug it out with your melee weapons, but if you don’t have one, your swings can otherwise be blocked, and they’re not going to be charitable and fight you fair and square: they can and will shoot you too. Take your choice of annihilation with the larger variety of weapons, from pistols, your trusty bow and hunting rifle, with some having the ability to swap ammo types, which is especially handy once you do run out. Otherwise, you can try to instigate fights between warring factions – or lack thereof in the infected. Let the cheating AI with their unlimited ammo fend off the fungi rave for you while you sneak past them, or maybe you’d stay for the fireworks. Have them signal to one another to take out the opposing side and do the dirty work for you. Listen out for their calls or whistles to find that opening. If you’re able, you can get your companions to take out more of those enemies too, because they’re also AI (aka probably better shots than you).

Stealth kills are pretty nice since you don’t need to expend unnecessary supplies. With the ability to go prone, you can be extra sneaky to decide and take your shot as you mull it over in the tall grass. Granted, the grass can both aid and hinder you: it can and will block your line of sight as well especially when you’re trying to crawl around before taking aim. Being able to sneak up close for a kill doesn’t use any of your precious supplies, nor will it alert enemies, so this would be a sure-fire way to take out your obstacles. It’ll be easier to hide from human enemies if your cover is broken, but as mentioned, it’s harder to do so with the infected. Luckily, in the timeskip, Ellie has researched swimming, so it becomes an additional way to hide from enemies in the water. Not just swimming, her timeskip skill tree also saw her put points into diving, to be really out of sight. Alas, she isn’t afforded iron lungs, so she will still need to come up for air once her meter runs out. Listen mode is available when you dive, so you can manage your risk level to surface, or not, or, well, die, I guess. It’s something new, and while not exactly novel, you can imagine the heightened tension as you hear guards walking by as you watch that oxygen dwindle…

You can do it all over again in New Game Plus mode which will carry over your weapons and upgrades from your previous save. If you had devoured the story straight up without looking for those collectibles – understandable really – then you can get those done here. Now as a note, with us hyping up all those graphics, there is a Photo Mode for all the screenshots to fill your hard drive with. If you wanna mail people no context screenshots, you can! Hurray!

MUSINGS ON A BROKEN WORLD

In closing, the first game had a lot of focus on hope. A hope for a cure, for maybe a better world after everything has collapsed around you as you did what you did to survive. It’s pretty much a 180 turn here, with revenge running deep… and its repercussions. This violent, beautiful world, much like real life, can see lives lost without ceremony. No warning, no final words, leaving merely silence. Is it worth bloodying your hands in pursuit of revenge? Everyone has a story to tell, even as they erase someone else’s. And I do mean, everyone. That random corpse you might stumble on in your exploration? Dig around a little more and you might find a note about their maybe mundane everyday life, or how they held on for as long as they could until they succumbed. People don’t start out wanting to die and all. The world may be – and is, in TLOU – godawful, but it’s the one they live in.

Are you even “worthy” to pass judgment onto others? Is it really the infected that has collapsed the world, or did the humans reach a boiling point, the infection merely a catalyst towards an inevitable end? It is a pretty grim picture at best, seeing a world buckling under a pandemic, only made worse by deadly monsters turned by the infection.

How many people can say they would be able to stay strong in such a situation? Would it be too much to ask for more kindness, before one’s needless wrath brings about a cycle of vengeance?

You know those kinds of stories that leave a gaping hole in you once you’re done? The Last of Us Part 2 just might be the one to leave you catatonic. It really wants to tell you a gripping, powerful story, showing you the ugliness marring the people in it, and definitely not for the faint-hearted. Hold on to what you can, and appreciate the life that you have. Make the most of it.