2021 ROG Zephyrus G14 Review – Power and portability packed into one

Note that this review is specifically meant for the GA401QM model. Some of the features and hardware described in this review may not be available on other models.

With that said, let us dive into this review of the 2021 ROG Zephyrus G14! The GA401QM model of the 2021 ROG Zephyrus G14 comes with two different options for colours—Eclipse Gray and Moonlight White, the latter of which is the one I received from ASUS. Honestly, I am not a fan of white because I can see myself getting it dirty in the long term, but I have to admit that it is very pretty, especially when you take into account its sleek design. It just looks very clean and polished.

Size-wise, it is really small and portable. With a width of 32.4 cm and a depth of 22.2 cm, it is about the size of a typical serving plate. You can put it into practically any backpack. It is not ultra thin by any means, with a thickness of 1.99 cm, but considering the hardware that ASUS packed into it, it is a very compact build. Similarly, not the lightest gaming laptop I have held, but at 1.7 kg, it is really easy to hold and move around on one hand. However, unlike most laptops that just have cool designs, the 2021 ROG Zephyrus G14 actually has a practical purpose to it. With its ErgoLift design, the laptop will slightly elevate its base when you flip it up, meaning that it is not completely flat on the table or surface you place it on. Because the base is elevated slightly, it is easier to type and rest my hands on it. The 2021 ROG Zephyrus G14 sports a 14 inch 120 Hz WQHD display, but if you want a 144 Hz refresh rate, other models also have it. For serious or competitive first-person shooter players, you may opt for the one with the higher refresh rate. Then again, if you are a serious gamer, you may want to choose a bigger, stronger laptop in the first place.

As a result, I feel that the 120 Hz display already fits all my gaming needs. I played Counter-Strike: Global Offensive on it and it looks and feels perfectly fine. Even on other games or watching videos, the colors are sharp and vibrant. Also, I really like how narrow the bezels are. The display feels wide enough to watch anything while still belonging to a compact body. The 2021 Zephyrus G14’s AniMe Matrix does have a few extra features compared to the 2020 model. Now, It can be used to display alarm and calendar notifications. There are also more tools for the software to make editing your own AniMe Matrix display easier. These new tools are the crop, undo, redo, export and import tolls. Honestly, these are pretty basic and should have been included in the 2020 version, but they are still a welcome addition. 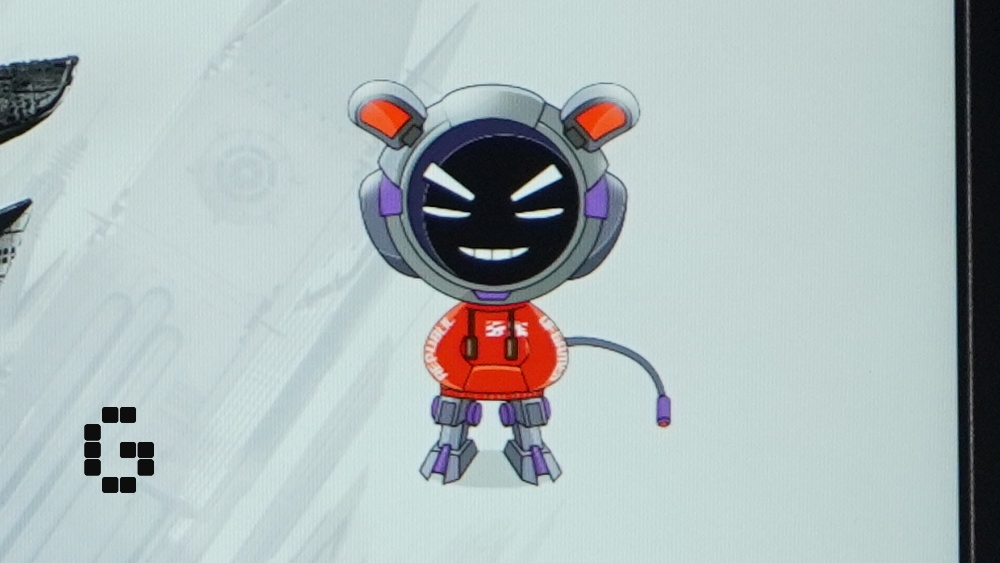 The 2021 ROG Zephyrus G14 also has a new virtual pet called Omni. Omni will appear on your screen and on the AniMe Matrix display at times. It will react to different states the machine is currently in. For example, if the battery is low, Omni will show a tired expression both on your screen and at the back of it.

On one hand, while its true the AniMe Matrix doesn’t do any major functions, it’s a fun little addition to your laptop. Omni’s expressions are quite cute, and I think for those of us stuck at home it’s great to have interactive feedback on your laptop’s health, especially if you’ve been working so long you’re not always checking the bottom of the screen to see how long until you need to plug it in.

More importantly, I think it does kind of play into the fantasy anyone who’s owned their own laptop has definitely had at some point or other. Your laptop finally has a reactive face, or at least a robot sidekick making sure your gear is in tip top shape. Like I said, it’s fun, and more importantly stands out as a new feature for the 2021 upgrade. As mentioned earlier, thanks to its ErgoLift design, typing on the keyboard for extended periods of time hardly gives me any discomfort whatsoever. It is easier on the wrists than a lot of other laptops.

As for the keys themselves, I feel that they are comfortable to press and touch. Not too squishy and not too clicky, just the way I like them. The top of the keyboard (above the F1 – F5 keys) also has extra buttons to increase or decrease volume, mute and quick access to the Armoury Crate. These are useful and practical, especially the key for adjusting volume. Best of all, they are mappable, so MMORPG fans—congratulations on finding more keys to bind your 1000+ skills to. It does not have as many ports compared to most work laptops, especially since most of the side is used for ventilation. While some may find the lack of a Thunderbolt 4 port disappointing, do remember that this is a gaming machine first and foremost. What it lacks in productivity, it makes up for in performance. Turning up the heat

This is the major weakness of the laptop in my opinion. The 2021 ROG Zephyrus G14 boasts an AMD Ryzen R9-5900HS CPU and a Nvidia GeForce RTX 3060 GPU inside a relatively small chassis, so something must give. In this case, it is the heating.

While ASUS boasts that the 2021 ROG Zephyrus G14 has received a thermal upgrade in the form of an upgraded fin design that dissipates heat quicker and a new heat pipe design that lowers the skin temperature by up to 2°C. However, lowering the temperature of the exterior by 2°C is not going to help much when the laptop is also already heating up to 80°C and above! The laptop can get extremely hot when playing intensive games. It is so hot that when I touched near the top of the keyboard when playing Resident Evil Village, it burned me. I do not want to imagine how it is like playing a GPU-demanding game with this laptop on your lap.

Do note that this heat was also probably because I was gaming while the laptop was charging. Playing games while the laptop is running on its battery will be cooler, but you will not be able to run games as smoothly. Also, you can adjust the fan speed yourself if it is too noisy, but this will be a balancing act between performance and quality of life.

Surprisingly, the laptop cools down incredibly fast. Barely a minute after shutting down Resident Evil Village, and the laptop is cool again. Also, thanks to its ErgoLift design (again), even if the laptop gets super hot while you are playing on a table, the surface itself will not be that hot.

You would expect a laptop that gets burningly hot will also drain the battery as intensely, but nope. Somehow, ASUS managed to pack a battery that boasts over 11 hours of battery duration in a single full charge. This is assuming you are not running an intensive program, of course. Also, note that you can adjust whether you want the laptop to focus on saving battery at the expense of performance, or prioritise performance instead of conserving battery.

During my review, in a one-hour session of Counter Strike: Global Offensive on battery, the ROG Zephyrus G14 went from 100% to an amazing 83%. Theoretically, I would be able to play over 5 hours straight of CS:GO. For a laptop of this size, this is incredible battery performance. The sound quality of listening to music and playing video games is actually surprisingly good purely from its speakers. It is not the best, by any means, but the speakers still provided good bass, mids and highs.

Also, once again, the ErgoLift design helps in the audio department because there are openings for the speakers at the bottom of the laptop, together with the ones on top. This leads to the laptop providing something close to a surround sound effect. Regardless, for the best audio experience, you would still want to use headphones.

A test of gaming prowess

I already mentioned that the 2021 ROG Zephyrus G14 is equipped with an AMD Ryzen R9-5900HS CPU and a Nvidia GeForce RTX 3060 GPU. On paper, these are quite powerful but to put them to the test, I played Biomutant, Counter-Strike: Global Offensive and Resident Evil Village. With max settings on Biomutant, the laptop managed to stay above 60 FPS the entire time, regardless of whether I was running around in the huge open world or fighting against enemies with slow motion effects everywhere. The game looked great and played great. Counter-Strike: Global Offensive was able to stay above 120 FPS at max settings, and sometimes reaching upwards of 140 FPS. Gameplay was incredibly smooth and while it did not make me a better player, I can feel the difference. Being the gamer that I am, I managed to push the FPS over 220 by reducing the resolution to 1200 x 720 instead of the maximum 2560 x 1440 resolution. For competitive players who do not mind the slightly compromised graphics, you can have an immaculately smooth gaming experience. For max settings and no RT, the game managed to hover around 60 FPS, slightly dipping under it and going over it at times. As for medium settings with Ray Tracing on, the game stayed at 40 FPS in outdoor environments, and 60 FPS in indoor locations. Just to push the ROG Zephyrus G14 to the absolute limit for this review, I tried the game with both maximum settings on Ray Tracing on. As expected, the game could only manage around 15 FPS. Regardless, the fact that this 14 inch gaming notebook could can even survive (albeit barely) is still commendable.

Also, these performance tests were done while the battery was charging. If you try to play games on battery, the performance will obviously drop. For example, the laptop capped Counter-Strike: Global Offensive at 30 FPS on battery. Thus, for optimum performance, you want to play games while charging the laptop with the 180W charger (not with USB Power Delivery).

I also benchmarked the laptop with 3D Mark, PC Mark 10 and Cinebench. Here are the scores: 3D Mark Time Spy managed to net a score of 6681. It claims that the laptop will be able to run Battlefield V at 1440 resolution with upwards of 65 FPS. This is a very believable claim.

As for PC Mark 10, the laptop scored 6660, scoring really well in the major categories of essentials, productivity and digital content creation. The 2021 ROG Zephyrus G14, in particular, the GA401QM model, is a beast of a machine outfitted in a compact 14-inch laptop. It has a wonderful and practical design combined with a powerful CPU and GPU with amazing battery performance. The only major drawback is that its temperature can rise tremendously when gaming. If you do not mind the heat, this is basically the perfect gaming notebook.