by Muse
in All, Nintendo Switch, PS4, Review, Windows, Xbox One
0

Ary and the Secret of Seasons has lofty goals, wanting to deliver a 3D action/adventure experience full of cinematic action, interesting characters, and an enjoyable story. Belgian indie studo eXlin have put in a lot of heart into their game, but unfortuntely, Ary might have been better off hibernating for a few months yet to go through extra polish for an even better release. Without further ado, here’s our review.

In the world of Valdi, the world is divided into four territories, each with their own season. Our protagonist, Aryelle (also known as Ary) is the daughter of Gwenn, the Guardian of Winter, residing in the city of Yule. Her brother, Flynn, went missing during his training as a Guardian and is believed dead. Falling into despair, Gwenn is unable to perform his duty, the catalyst for Ary to save the day. Mysterious crystals fall from the sky in Yule one day, changing the wintery city to summer. The other territories are affected similarly, with the summer city, Lammestide, struck by the winter snow. To add to the chaos, hyena creatures also attack Yule, one of them bearing Flynn’s sword. Determined to uncover the mystery behind both her brother’s disappearance and the strange crystals, Ary sets off to journey through the magical world of Valdi.

The second spring: Valdi at large

Ary‘s art style is reminiscent of weekend cartoons that fits the tone of the game. Each city has their own style, reflecting the seasons they represent. Unfortunately, the variety does not extend to the creatures of the world: there’s your regular humans, the hyena monsters, pandas, mushrooms and slime, besides the bosses themselves. Fortunately, this is slightly alleviated with the amusing dialogue and unique personalities of the people you do come across. For the most part, the main story is linear, sending Ary all around Valdi. The world is a large one, with NPCs scattered around giving side quests consisting of fetching items or finding stsuff. Once that’s out of the way, the gameplay shifts to sending you to every season temple and square off against the bosses that reside in them.

The third summer: the Season Sphere

The primary gameplay feature centers around the use of season spheres, to create localized seasons to defeat enemies, solve puzzles and traverse platforming areas. Winter is used to create floating ice platforms and freeze water, spring fills up waters in lakes and rivers or grows a vine that can be used to climb. Both autumn and summer don’t actually do anything unique, but summer can melt ice. 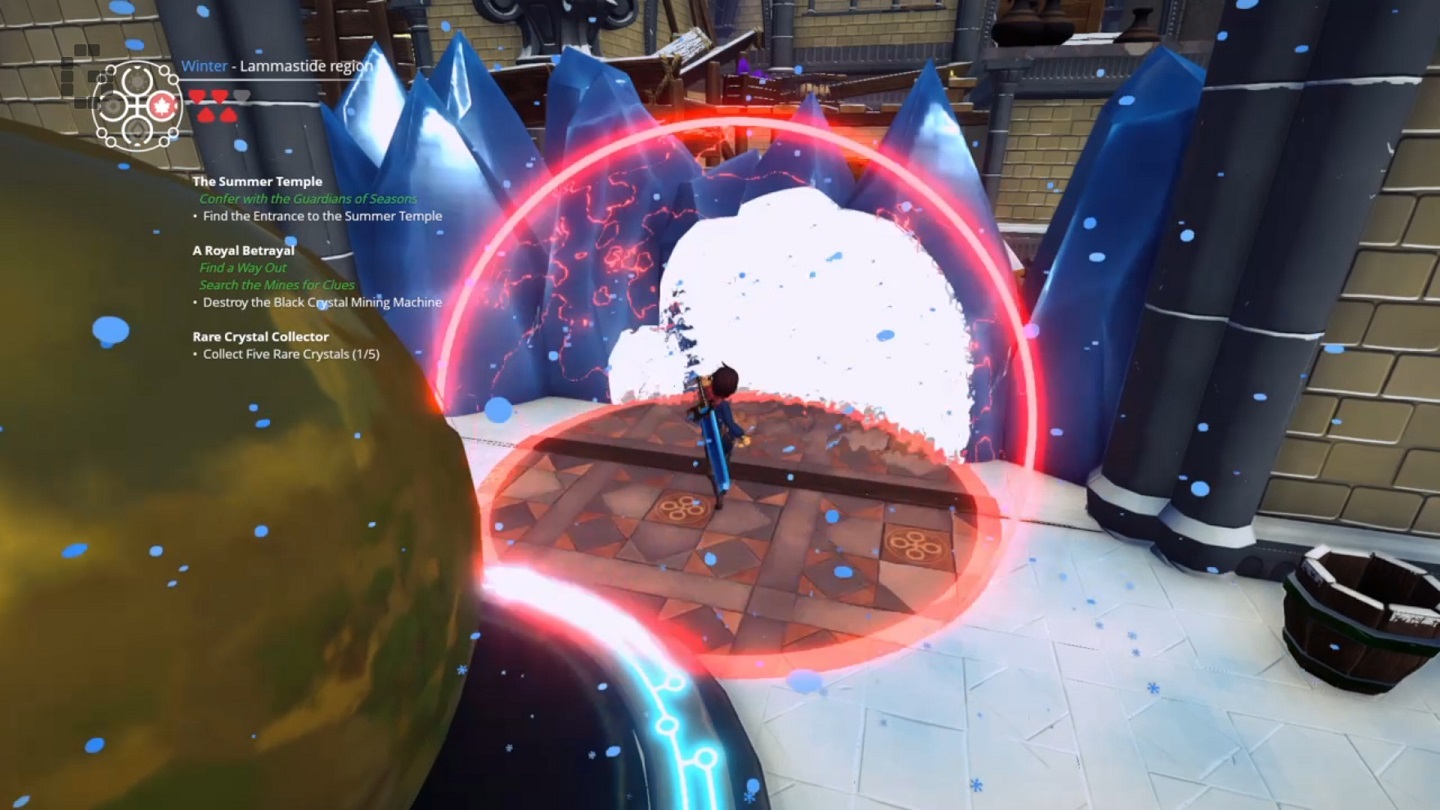 You’ll need to master the four elements to make your way through dungeons with increasingly complicated puzzles, or just to help the townsfolk who’ve h ad their seasons thrown out of whack. The ability only works in a limited area around Ary, nor does it last very long. Only one season can be active at a time, and the seasons can’t be stacked with each other, so you’ll need to be strategic in your placements and selection of the seasons.

The season spheres are also usable in combat, but the combat system is easily the weakest part of the game. The lock-on camera often targets the wrong thing, and you don’t gain any experience or items once you defeat them. In that case, it’s better to flee from encounters besides the mandatory ones – like bosses – that require more thinking and experimenting to reveal their weaknesses. Ary can complement her fighting style with a variety of implements, from wooden/steel swords, plain ol’ wood, a cane, or even cups. The monsters you find will have weaknesses to specific elements, like how you might find a hyena clad in ice armour which you need to melt with summer. Ary can also just whack things, dodge or parry and counter attacks. At a high enough combo, she can unleash a solstice attack that with R3, unleashes the power of the seasons to injure her enemies. Even should you fall i n battle, respawn points are generous, dropping you off a few meters away, playing like a person’s first experience in an adventure game.

As mentioned, Ary and the Secret of Seasons has quite a few big ideas going for it: the epic adventure looking to stack up against any AAA title. In its ideas and creativity, it succeeds, with Valdi being an expansive world, interesting story and challenging dungeons. 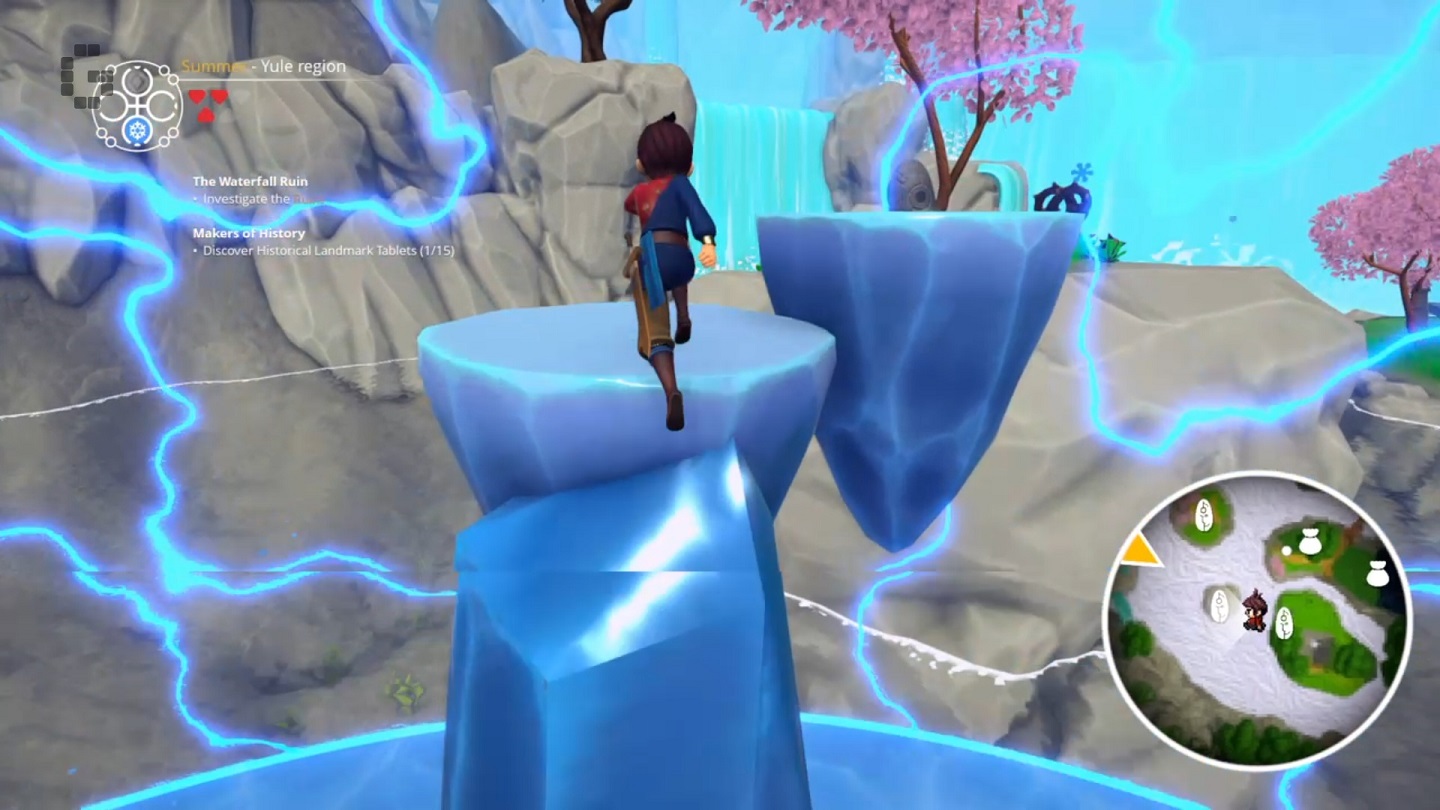 However, its execution is marred by bugs, like missing dialogue, and graphical issues like screen tearing or awkward animations. There are accessibility options, but it didn’t feel like it really assisted in much. If you can push past the issues, though, it is still a fun romp you can play with younger members or the young at heart to just take in the world that eXlin has worked on.

With a bigger budget and more development time, the studio could look to make something even better. For now, Ary and the Secret of Seasons is available worldwide on Nintendo Switch, Playstation 4, Xbox One and PC.

Give us some support by subscribing to our Youtube Channel !
Tags: Ary and the Secret of SeasonseXlin
Previous Post

Sasaya, a 2d Metroidvania, Available Now On Android and iOS