And they just don't stop comin'

It’s time for another session of the Steam Next Fest Roguelike / Roguelite diving, because I can never get enough of roguelikes / roguelites even if not all of them will get their hooks into me. It’s always a fun genre to get into because the randomness is appealing and seems easy to set up, and makes for wonderful quick sessions in between, until someone balances things horribly wrong.

Much like the previous demo blitz, I’ll only be trying out the games that do have the roguelike / roguelite tag, giving around 30 minutes per title or until the demo ends, whichever comes first.

A totally scientific unit of measurement for games I’ll be interested to check in full, or at least would recommend to try. With legally distinct Bruce L33 in the demo, proceed through the levels with a mix of TRPG and deck-building. You can choose from 3 basic starting decks, complemented by Infusions which function as usable items with limited charges. There’s another dimension of strategy as you utilize movement and positioning to make your cards cost efficient. I think my only nitpick would be the user interface, and the fact I couldn’t seem to quickly use cards, having to drag them to the hero even when there’s only 1 valid target. Dig your way to resources while fending off the creatures on the surface. “Brutal” is the intended way to play the game, which is not my cup of tea, opting for the “Hard but Doable” option instead. I did enjoy juggling between the extraction and the defense, if stressful as after some point, it feels like it can slip way too out of control. I especially feel that it’d be fun with co-op, theoretically assigning some to watch for the enemies while the other gathers, with other parameters to introduce to keep the challenge when there are more hands on deck. Or the dome, as it were.

CULT OF THE LAMB Cutting myself on the sheer Edge aside, the game’s art style is striking with the lamb looking positively giddy at the thought of an apparent eldritch being drafting the formerly-deceased sacrifice into forming a cult to bring back said being. There are toggles for the various post-processing effects if you’re like me, one with motion sickness.

There’s the element of base management since you need to feed the followers you’ve indoctrinated and the possibility of themselves breaking free of the brainwashing. Pacing of action can get quite frantic as you swing your weapon around and all. Controller recommended. Similarly to Lost in Fantaland, this is another title that has tactics with its roguelite. All units seem to have very low HP, and that’s definitely by design: your enemies’ moves are fixed, so if you can use the environment to bamboozle them or shift them around, you won’t take damage. However, it’s not as easy as that as you have “Shades”, an afterimage that can still take damage unless you use the Dash command. There’s more tactics than roguelite from what I’m getting, so that’s something to consider.

One more thing I wanted to note: I’m assuming it’s from an asset pack but I was surprised to see Lyndal’s Queen’s Order icon I first saw in Breach Wanderers here. Breach Wanderers has since redesigned this particular card, Syphon Card. Who’s up for some Tetris? I’ve never really played Tetris before, so you can imagine me struggling to place the blocks and despairing. Without doing the tutorial first, I didn’t even know how to clear the lines, expecting them to poof automatically without considering the fact I would’ve sent the little knight tumbling into the eternal abyss if so. Would definitely be interested in seeing the Tetris 99 players go absolutely ham. In a setting that reminds me of Ghost in the Shell and Psycho-Pass, you get to play a cybernetic soldier gunning down mooks in rundown, neon-lit alleyways. Action is quite frantic as you can lob grenades, EMP, and hook yourself towards enemies to Mark them. Starting ammo and HP is really limited, and Marking enemies is, as the game informs, how you survive, blasting them down to replenish yourself. There’s not much to say about the game itself, as the action will do all the talking. It has the style, definitely. The narrator is trying really hard to keep that growly voice, bless. The writing has great flavour, eliciting a few chuckles from me. Since I’ve previously recommended games based on visuals, I would be remiss not to point this one out.

Your band has 4 members with their respective archetypes, and they share one pool of energy. Barriers completely negate one hit, armour blocks that much damage, items can only be equipped to one person and can’t be moved around… if you’ve played one deck-building rogue-type game, this should be easy to pick up.

As these are demos, the ones in this category may have interesting ideas, but what I consider their main selling point isn’t quite functioning, or just needs more time. This demo has some really dramatic music when all I did with a dubiously dressed nun was walk around the battlefield, letting my power-ups smite my enemies with the power of magic and / or wishful thinking. With enemies capable of spawning right at your feet or a swarm zooming across the screen, if your stuff isn’t strong enough then you could die unceremoniously. There doesn’t seem to be much here now mechanically, so come back later. There’s no shame in admitting you’d stay for the vapour-wear. The most “random” this game gets in 30 minutes would be ambient events and the prophesized events that happen every now and again. You can prepare for those events ahead of time to get better outcomes instead of disaster. I find the city building aspect quite convenient, but that’s not necessarily the roguelite experience most are looking for.

Just a side note, I am very appreciative of the option for more dyslexic friendly text. This just needs to be adjusted so that it doesn’t spill all over the menus in the future.

These games include those I can’t play due to things such as motion sickness, or I simply don’t “vibe” with the mechanic. Or I’m bad, in any combination of these. Probably mostly bad.

FABULAR: ONCE UPON A SPACETIME Cosmolizards! I enjoy the presentation and all, moving from node to node and the various encounters offering the possibility to learn more lore while you decide on how to proceed. The combat can be frantic, with perfect timing attacks and blocks you can execute, all the while hoping you don’t careen out of control into the asteroids. I simply don’t prefer this kind of combat, but this is one I will recommend to those who want something more active.

EYES IN THE DARK: THE CURIOUS CASE OF ONE VICTORIA BLOOM 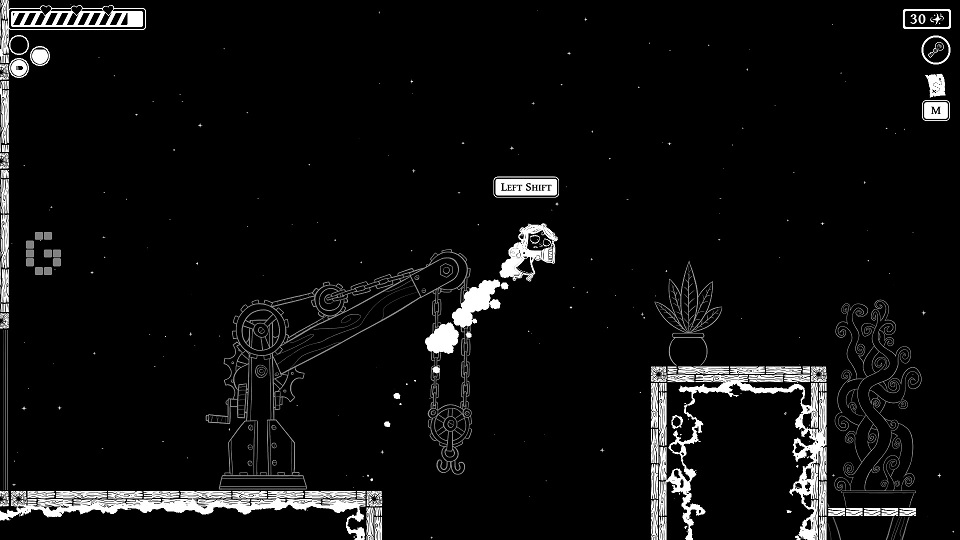 Anyone who’s read my reviews or off-hand comments should be well aware of my aversion to platformers. Still, it doesn’t mean I can’t try out one. The titular Victoria is a spunky girl who can tinker with her Flashlight to defeat enemies, with various upgrades and on-the-spot scrapping she can do to pursue whatever creatures that have spirited away her grandfather.

I unfortunately encountered a bug wherein the slow-mo from the Slingshot persisted throughout the file on defeating a boss – unless it’s not a bug, which rather dampened my enthusiasm. Otherwise, it’s got interesting mechanics that seem to encourage both defensive and offensive playstyles, so give this one a go.

WE WHO ARE ABOUT TO DIE As warned, this game features an unusual combat system where attacking requires you to drag your mouse back and swing it in the right direction. It quite fits its gladiatorial theme, as the poor sod thrown in there to fight for your life, and the patrons that be are hella bloodthirsty. At its current stage, it can feel clunky, but I do like the weight it gives your actions, even if I don’t enjoy the mechanics themselves.

Your zero-to-hero can be further trained, of course, with the slew of permanent upgrades you can unlock, and potential weapons you can wield. The game really leans into its theme, as opponents can and will make bets against you and you can show ’em up to reap those rewards, the aforementioned patrons, and more features to come. 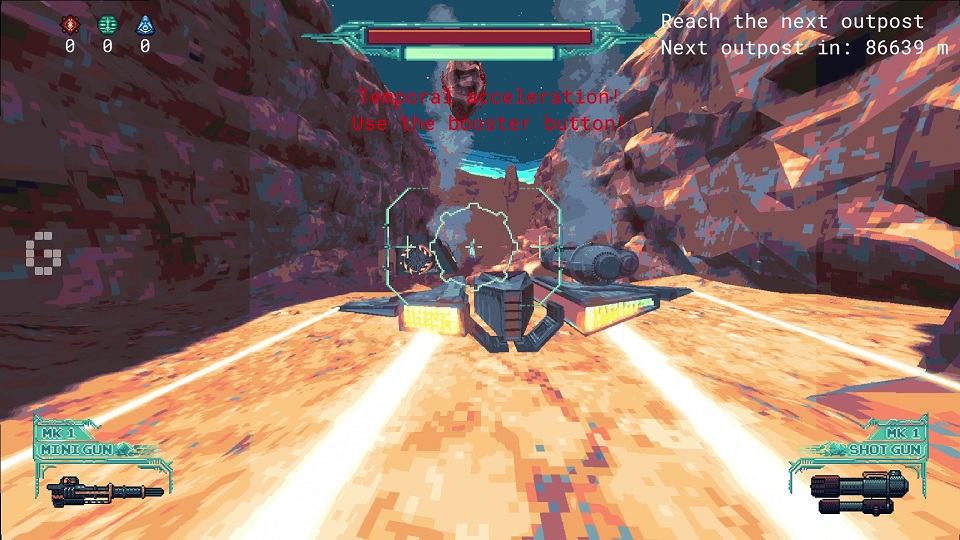 I do not have a controller or flight stick to accurately judge this, unfortunately. The mouse is not the greatest tool to fly a ship, as proven when I crash into the ground not 30 seconds upon take off. Still, if you’d like to speed through canyons, by all means, do give this a proper shot. It definitely has style, as turn-based, deck-building doesn’t need to be so static. It’s also definitely a demo, as the tooltips aren’t entirely implemented for keywords, there doesn’t seem to be the option to change targets, and the changing camera angles / slow-mo is firing off my motion sickness. I encountered an enemy that uses a bomb that’s thrown at their feet, but since it’s not tile-based, judging the hitbox is another problem.

I can at least gather there’s at least 2 zones to a combat encounter, but personally, I’d ask for more visual clarity to start.

Now go forth and do your own demo diving as there’s only so many one person can reasonably do at a time, and I’ll see you next rogue.

This is also a casual appeal for Amplitude to let me into their OpenDev for Endless Dungeon. Please.