With Rollerdrome less than a week away from its launch, there’s a lot to ask. For one, what kind of timeline are we in that we’re getting an arena action game involving the two raddest things in the world- rollerskating and shooting tools of an oppressive mega corporation?

It’s no secret that I love what I’ve seen of Rollerdrome so far– it’s frenetic, chaotic and other bombastic words that take to mean very, very good. But what was it like making the game?

We caught up with Paul Rabbitte, Creative Director of Rollerdrome to talk about the game’s development, as well as the weird resurgent of the idea that humanity would be much better off with wheels bolted to the soles of our feet and guns that reload whenever you do a flip.

While he obviously spent a lot of the time sharing with us the design philosophies of Roll7’s new skate game, he did also take time to comment on a few other things, such as the accessibility options of Rollerdrome as well as the bizarre resurgence of rollerskating in general.

The concept of skates + guns is pretty unique, did you decide that it had to be a skate-action game from the get go or did it somehow happen along the way?

Paul: Yes, this was something that came about in the original prototype. I created a very early concept for the game during a game jam about ‘Dual Purpose Design’ – the idea of using one mechanic for two purposes. That’s where I had the idea for a game where doing skate tricks allowed you to regain ammo, and from that idea Rollerdrome was born.

We're just over one week away from the launch of Rollerdrome.

Drop in on August 16th across PlayStation 4, PS5 and Steam.#GameDev #MadeWithUnity pic.twitter.com/3ydgsflzHj

Considering in a traditional shooter, recoil is usually a big part of having guns feel good, could you talk about what it was like balancing the feeling of the guns vs the movement in the game?

Paul: Yeah, this was pretty tough to balance. Kara can aim in any direction while spinning, flipping, wall-riding, grinding… there’s a lot of poses she can be in and we have to think about how that would impact recoil. It took the whole team a really long time to figure out how to get that to work and to look good.

For a lot of games with a scoring system (Bayonetta, Devil May Cry, OlliOlli World) there’s always a certain logic that dictates what actions are weighted more for scoring purposes. How did you decide this for Rollerdrome?

Paul: In Rollerdrome, you need to do tricks to get ammo, but the scoring system is set up so that you’ll get a higher score by using a wide variety of tricks, and each time you kill an enemy it increments your multiplier. This combination really encourages players to mix it up and hopefully pull off a wider range of awesome stunts as they make their way through a match! Were there any features or elements that got added late and made a huge difference?

Paul: Nothing got added particularly late, but I’d say the two elements that made the biggest impact on gameplay were the slug shot and perfect dodge – those both added another layer for players to master. Since we have auto-aim on the shotgun, the slug-shot also made it more about timing than aiming which was a good trade-off!

In the preview we’re given quite a variety of House Players, could you talk about what it’s like designing all the different types of enemies and planning their interactions with the player?

Paul: We wanted every enemy to have their own function, which is awesome on its own but also combines with other enemies to create new experiences for the player. One key thing is that all the enemies have different move sets, which encourages the player to try different ways of moving around the arena and securing kills. I’m a huge fan of the kind of soviet-era-style of Rollerdrome. Was there any particular reason for that look?

Paul: I was very inspired by 70’s sci-fi films while we were making Rollerdrome, so the style is very much based on that. One of the key ideas we had for art direction was to approach the game as if it was a low-budget 70’s sci-fi film – so the setting has a lot of brutalist architecture that would have been very modern for that time period, and the characters wear clothes that integrate things like knee pads and helmets which would have been available at the time.

The game has quite a lot of great accessibility features, including options to turn off the timing-based features like the Slug Shot window. Do you have anything to say about letting more players feel like an armed skate god?

Paul: Player freedom was really important to us – whether you’d like to use assists to help you finish a level, or pull off an especially awesome kill, then we want that to be an option. It might be something you use to help you practise, and then you turn it off, or it might be something you need to use the whole time you play. Either way, if you’re having fun then you’re doing it right! 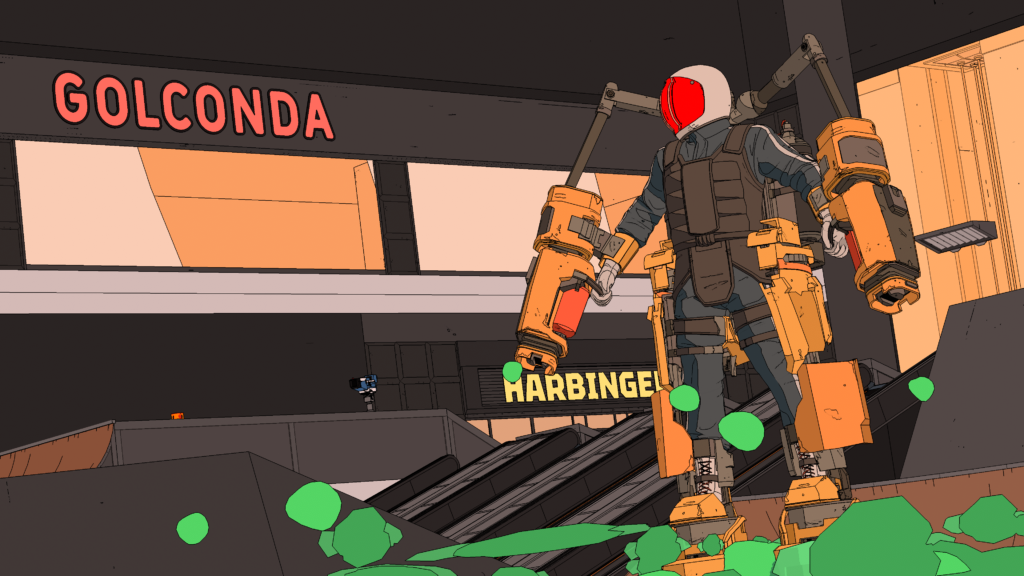 With Rollerdrome releasing so close to OlliOlli World, could you talk about if the development of these games influenced each other in any way?

Paul: OlliOlli World and Rollerdrome were developed by two separate teams, but we did share tech and advice with one another – including our in-house NoComply renderer. Having another team to chat to and run ideas by was definitely a bonus.

The roller disco is making a comeback, did that have any influence on the design of Rollerdrome?

Paul: I feel like it’s less that Roller Disco influenced Rollerdrome, and more that it happens to have been making a comeback at the same sort of time. I’d say that Rollerdrome definitely drew a lot of initial inspiration from Roller Derby, though, which has also seen a big boom in recent years. It’s actually very cool to see rollerskating getting more mainstream again!

It’s very rare that you get to see a game so very hard to compare to any other games on the market right now, but that’s certainly the vibe you get off of Rollerdrome.

Rollerdrome launches August 16th, and brings with it action, style and most importantly, sick flips. Our thanks to Paul Rabbitte for taking the time to entertain our questions, and don’t forget to pick up the game at launch for a special introductory price.