ROG Flow Z13 Review – The little tablet that absolutely can

by Kit
in All, Reviews, Tablet
Reading Time: 5 mins read

The ROG Flow Z13 has been branding itself a gaming tablet that can play AAA games, uncompromising in its performance and portability. That said though, can it live up to such lofty ambitions?

The box itself is separated into 3 parts: first, a protective case for the tablet with the emblazoned ROG designs, made from a scratch-resistant material. Then, a silver box that houses a 100W Type-C fast charging charger and the ROG Chakram Core, before the tablet itself. It looks quite high-tech, befitting its entire premise. Built with CNC-machined aluminum, the ROG Flow Z13’s overall design screams Future Tech, Sci-Fi, and all that. The glass space window is especially fetching, through which you can see the internals of the tablet with accompanying RGB lighting effects. It reminds me of a spaceship really. Looking closer, you might wonder about the numbers that line the tablet. These are actually “Easter eggs”, showing the location of the ASUS HQ in Taiwan, and the ROG brand’s launch date in simple cipher. More practically speaking, maybe it’s a little much to expect a full range of I/O ports, but considering it’s a tablet, it gets more of a pass. The left is lined with a Thunderbolt 4 port, USB 3.2 Gen 2 Type-C, and speakers, while the right has a fingerprint recognition power button, volume button, USB 2.0 Type-A, 3.5mm headphone jack, and smart speakers. It can be expanded with the XG Mobile external dock, but this review will be focusing on the tablet exclusively.

From dimensions alone at 30.2cm x 20.4cm x 1.2cm, it’s hardly any different from similar tablets on the market. However, it is slightly heavier at 1.18kg due to packing a 14-core 12th Gen Intel® Core™ i9-12900H processor and NVIDIA® GeForce RTX™ 3050 Ti 4GB GDDR6 with Intel Iris Xe graphics. For the record, the processor is the fastest and most powerful mini processor on the market at its release, so the weight is a reasonable tradeoff.

The tablet has a support stand that is adjustable up to 170 degrees, made of metal and pretty solid. The back itself has some discreet parts where the right corner holds the SSD should you want to replace it, and in the middle-left is the Micro SD card slot. Utilizing Windows OS, that means playing your regular PC library is super easy, just needing you to get the launcher, download the game, what have you. It’s also Windows 11, featuring optimized touch screen utility with the directional swipes: access the Widgets from the left, Notifications from the right, bottom right to make various setting tweaks, that kind of thing. Of course, we can’t forget about the whole visual experience you can get on this 13.4-inch IPS, 120Hz FHD screen. 16:10 means you can enjoy a wider screen too. For other functions, you get a 720P HD front lens which doesn’t work very well in low light but functional, while you have a 8MP lens for the back.

As befitting a tablet, the ROG Flow Z13 comes with the ASUS Pen. To make it more like a mini computer, a POGO Pin connector under the tablet is where you can attach the ASUS Flow magnetic keyboard. Not only does it have RGB lighting, it feels much like a mechanical keyboard that makes it comfortable to use. The keyboard somewhat doubles up as a protective case when you fold it, with the tablet going into hibernation mode when you shut it that way. The back of the keyboard is this fabric that does make it easier to dirty with difficult clean-up, unfortunately.

Coating the processor with Liquid Metal thermal paste, as well as dual ARC Flow fans and thermal equalization plate between CPU and GPU, this ensures balanced heat dissipation so no hotplate one would say. Supporting all the hardware is the Armoury Crate App for you to tweak the settings and modes. Silent Mode works as promised, the tablet whirring away quietly. This mode isn’t very good for gaming though, as the temperature will start climbing. Expect hot spots around the middle and top of the back of the tablet, since that’s where the processor and graphics card is.

Conversely, Performance Mode gives the tablet a performance boost, and you can make it go Turbo for intelligent overclocking of the CPU and GPU when you pair it up with the charger. This is how you’d probably do most of your gaming or creative editing. You still will be able to play games without charger, but it will require a compromise in graphical quality.

Packing the RTX 3050 Ti, the ROG Flow Z13 means it gets all of NVIDIA’s latest features in DLSS, RTX, Reflect and others, in addition to ROG’s MUX Switch that greatly reduces the lag in your games thanks to directly delivering that performance to the screen. 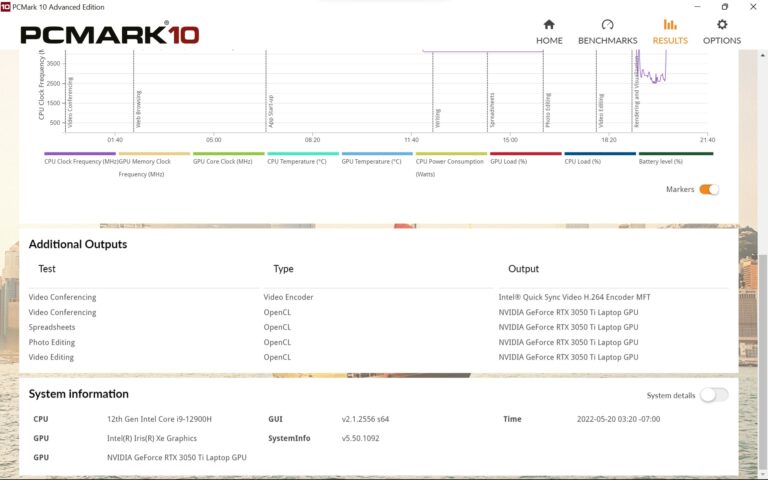 At highest quality, with Ray Tracing and DLSS on, the light, rain, shadows, lights of Tokyo looks gorgeous, while running smoothly.

At highest quality with Ray Tracing on, FPS basically sails 60 – 70 FPS without issue.

On Ultra quality, it maintains 30 FPS, which is pretty impressive for what is basically a tablet.

At highest quality settings, hitting 80 FPS is not a problem.

Overall, you can expect 30 FPS on average. As mentioned, if you don’t plug in the charger, the game quality has to be sacrificed. Low Quality will allow for 30 FPS, though more demanding games will dip further to 20 FPS. Whenever I remember this is basically a tablet, such performance can rival or be better than some laptops.

While we’re talking about charging, the battery has 56Whrs of power. On Silent mode, Youtube at 50% volume and 80% brightness, the tablet will last 5-6 hours. Lower the brightness further for longer battery life. Performance mode, with keyboard and mouse, meanwhile, will burn the battery through within 1-2 hours.

As promised, the ROG Flow Z13 can basically is, hands down, an amazing machine in terms of design and hardware. The glass window design is especially fetching and is sure to grab attention. It’s lightweight and easy to carry, the flexibility is definitely one of, if not the, main selling point. Draw it in tablet mode, connect the accessories for laptop mode, or simply use it as a secondary screen. If you didn’t quite want a laptop, but wanted something that matches a computer’s performance, then the ROG Flow Z13 can be your best bet.

Learn more about the ROG Flow Z13 through the official website here.