In Sound Mind (PS5) Review: What a Beautiful and Glitchy Thing the Mind Is

The PS5 Version May Not Be so Sound of Mind

In Sound Mind is an imaginative first-person psychological horror game developed by We Create Stuff using Unity Engine. Considering the game is their first big project in a while, it is an impressive showing combining a good psychological story and strong main character.

It is somewhat let down however by a few graphical bugs and a weaker antagonist who pulls the game’s otherwise solid writing down. If you’re still feeling an itching for some horror after Halloween, this just might keep you sound of mind.

Also please note. This review is specifically for the PS5 version of the game. While they’re all mostly the same, this will come into play in one specific area later on.

The Story Within Your Mind The game takes place in an imaginary world inside memories of our main character, psychiatrist Desmond Wales. He’s not doing the best at his job though, having to deal with a bizarre series of cases where many of his patients have lost their minds to the point where they ended up dying or even committing suicide.

Soon when he wakes up inside a twisted version of his apartment complex where he finds out that a mysterious skull-faced individual (the guy on the cover) has been the cause of all of these incidents. Your mission is simple: stay awake, try to keep your sanity, and find a way to stop the madness before you are consumed by your own twisted imagination.

I ended up really getting into the story as I really liked the main character. Desmond is a very responsible and active protagonist, who truly cares about his patients, mainly with a girl named Virginia, who let’s just say has a pretty rough backstory. He puts his neck out for other people without thinking about himself, making him feel far more heroic than the usual reluctant anti hero’s you usually see in the horror genre. It also helps that his voice actor Mick Lauer is good and really gets you into the character.

One character I’m not a fan of however is the main villain. He’s just a little too over the top for someone that’s supposed to fit into a tragic horror game. Some people make say I shouldn’t take the game so seriously but his voice actor is trying way too hard to make the character intimidating but end up sounding goofy. In general, I’d say the game sometimes takes the comedic elements too far. Likes there’s a couple of recurring jokes about how our main character makes funny sounds when eating. It just feels forced and out of place.

All of this being said, the game can be scary. One of the best moments I had playing it, is when I was reading a document in this one room when suddenly I turn around its the main villain is just casually walking up to me, just to tell you “someone’s getting along” before he disappears. It comes out of nowhere and you’d never see it coming. It puts really puts you on edge and makes you wonder when he’ll show up next.

Exploring The World In Your Mind

There are three main gameplay portions in In Sound Mind, which are exploration, puzzle-solving, and combat. Let’s discuss it separately: In Sound Mind makes use of many assortments of creepy areas, from your dark apartment complex to a meat factory and like your classic horror, you better make sure to explore every inch of each area to find clues. There’s a lot of backtracking in this game and with no accessible map, you better make sure to memorize everything you learn. This is one of the weaker aspects of the game, without a proper map and so much to explore it can be hard to progress at times not knowing if you’ve missed something and need to go back. And if you’re being chased by an enemy, it’s admittedly intense but after time can become just a pain. I understand older horror titles like Resident Evil and Silent Hill had a lot of confusing exploration but they also had maps that clearly marked where everything was so you could easily decide where to go next. This one top often just leaves you in the dark.

The more progress you make, the more stuff you can get, like food to restore health, ammunition for your pistol, and medicine which increases your stats. One cool idea is that the piece of glass you use as a melee weapon can also be used to find hidden items and messages by looking through it. 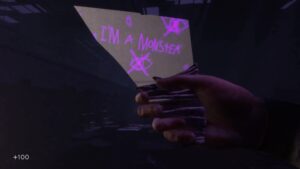 Finding new items is pretty satisfying and gives you a brief sense of relief knowing that you are at least one more health item away from dying. That being said, Medicine is not easy to get, because it involves solving the game puzzle-solving, which we’ll get to in the next section. Puzzles can very love it hate it affairs for me. Thankfully, In Sound Mind they are cleverly put together and fit nicely with each area that you’re exploring. For example, there’s this surveillance room where you can open up a safe, but the code is hidden where the security camera supposedly can’t spot it. The way to solve this puzzle all you need to do is to look at the CCTV footage in order and find at least one number from one CCTV camera that is spread out in a whole shopping complex, put it together and VOILA you get the code! This whole puzzle can take time since you also need to restore power to the surveillance room and read some clues from documents, but the payoff is rewarding because you get four medicines. It’s optional, so it doesn’t feel like a chore the game is forcing you to do and it gets you to further explore the world.

That being said, like exploration, the lack of clear direction can make the game confusing. There are puzzles that are mandatory and it can be hard to differentiate between the two and the way they mix the optional and mandatory puzzles can get overwhelming and bring the game to a halt as you figure out what to do. This is especially annoying for people that just want to focus on the main story instead of looking for medicine. If I’m honest, I can just picture a content creator that wants to stream this game that might get stuck in one area for too long and just get roasted by the viewers. Combat is a barebones but servicable. You start with a flashlight to see, a pistol to shoot and a piece of glass to slash. Later on, you get more guns like a shotgun and a radio that can hack control panels. There isn’t a lot of versatility with your resources with each serving more or less one main purpose to overcome obstacles. This isn’t an action-heavy game though so the combat is average, doing what it needs to so you can take out the monsters in your path, even if it’s maybe a little too simple and repetitive.

PS5 Version IS the Nightmare This brings us to the central problem of In Sound Mind. The PS5 version is badly optimized. There’s this one bug that prevents progression after the Homa Mart level. After finishing the Homa Mart level, the game basically opens up and gives you more freedom to tackle the next mission. Whether you want to check other Cassette Tapes that are needed to access different memories (levels) or go back to the basement to get a gas mask as new equipment. But instead of doing all that, I decided to go back to Homa Mart since I wanted to know whether it’s possible to revisit certain areas.

Turns out this was a bad idea because after that I couldn’t go back to my apartment again and was forced to replay the whole Homa Mart level from the very beginning. It’s extremely tedious. Since it’s a replay, you lose all the equipment from Homa Mart that is already in your inventory unless you get out of the memory. The game does provide an option to fast travel to your apartment from the pause menu, but every time I teleport back, my character gets stuck outside of the map. I can’t control my character and the camera just moves around like it’s in a spectate mode. So my last option is to replay the whole Homa Mart level, which I did, but for some reason, I still ended up stuck at the same spot when I went back to the apartment. There’s actually an option in the main menu where you can do a new game from a different level, but the menu just froze when I chose Point of Icarus (the third level after Homa Mart).

It feels like I’m just cursed to not progress anymore. At this point I decided to say “Ok let’s wait a while and see if there’s any patch since this seems like a pretty big issue”, but there has been no such thing. I can try replaying Homa Mart level for the third time, though there’s no guarantee it’ll make a difference and the level itself is just tedious. As far as I can tell the PC version is fine, the user review on Steam are Positive and people rarely complain about any bugs, so perhaps the copy we got is cursed or something.

Besides that one big nasty bug, I’d say the performance on the PS5 is not bad, but sadly there’s a noticeable FPS drop in certain areas, like when you walk in a corridor and there’s this chemical puddle where you can see the colorful glittering effect, there’s a noticeable drop when you get too close to it. There’s also no fancy support for haptic feedback and adaptive trigger, it just feels like a normal PS4 game that is being ported to PS5.

In A Not So Sound Mind In Sound Mind is a pretty unique horror experience. The story is great and actually makes you feel like a hero with its likable main character doing his best for his patients. Sadly though, the PS5 version is plagued by some of the worst bugs that I’ve seen in a while. You’re blocked from progression no matter what you do. The performance on next-gen hardware is also really standard aside from the higher FPS and resolution, but even then, there are still noticeable frame drops.

There’s a very good chance that I can get a much better experience by playing the game on PC, but for this PS5 version, it’s just that bad. Hopefully, the team at We Create Stuff can look into this version and release a patch to fix some of the major problems. But at this current state, it’s hard for me to recommend the game on PS5.

All Gundam Cafe Outlets To Close Next Year