Rainbow Six is the latest series to make the leap to mobile devices. Of course, bringing a big console game to the smallest of screens is not an easy process. Phones and consoles are very different mediums after all.

We were lucky enough to get a chance to interview the Lead Game Designer of Rainbow Six Mobile, Olivier Albarracin.

With years of experience at both Gameloft and Ubisoft Montreal, he certainly knows a thing or two about making big games for smartphones.

He couldn’t tell us a lot about the game since it only just got announced but he did give us some insight on what his team has done to adapt Rainbow Six to mobiles devices while keeping its team shooter’s identity intact.

Q: How many operators are there in the initial roster and who will be there?

Olivier: So for the operators, we have been selected a huge like sleuth of them. I can’t really say right now how many or which one, but I can tell you that we have selected a lot, based on the data and community feedback, and we used that to select the first portion of operators. As we get closer to the alpha, we’ll give you more information on that.

Q: Considering how complicated the gameplay of Rainbow Six Siege is, how difficult is it to optimize the control for a mobile device?

Olivier: Yes, that’s a good question, it’s something we had a fun time working on. We’ve worked on making sure that the game is a smooth and intuitive experience, and the goal is to reproduce the same experience as you would have on console and PC but optimize the controls for mobile.

We have adopted some systems and made some innovative features such as double-tap to melee, or a lean slider so you tap a button and you pick a direction and your character will lean a specific way. We also have automotive systems like auto-sprinting, and sprint lock, when you tap and shoot it automatically goes to ADS, things like that really make the experience much easier to play.

And also we created many comfort features and if you want to have all the buttons on the hud, of course, you’ll have this. For further customization, you can move the buttons around.

We aren’t going to remove any quality features, just make it seamless and easier to execute, so that everyone can kinda feel like a pro. And we also focused on onboarding, making less experienced player feels good when they jump in. Siege is a complex game, so we really want to teach many of these things to [new] players at the start.”

Q: It is mentioned that Rainbow Six Mobile will have exclusive modes, can you elaborate more on that?

Olivier: Yes, so I can’t really. Well, what I can say is that we will have a Secure Area and Bomb [The two modes from Siege], and we will have new game modes in the future.

It’s the same system though, as you would play on Siege but, we really focused on having a shorter session length, that would be a lot easier on mobile. If we want to have a longer session length we have the tools to do so, but the first mode is the best-of-3 Bomb and Secure Area, and we really focus on keeping this philosophy of “The gameplay is the same, but a bit faster” like getting into the building faster. And in doing that, we have to do some balancing on the game modes to make sense of it all.

Q: Is there a planned time window for the Alpha test? Which regions will be available for the test

Olivier: I would love to give more info on that, I think we will have a website up at www.rainbow6mobile.com, which will give more info as we get closer to the date.

Q: Although Rainbow Six Mobile looks very similar to its PC counterpart in the pre-alpha trailer, this is still a different game on different platforms. How much of a difference is there when compared with the PC version of the game?

Olivier: I think the main thing is we really want to keep to what the core Siege experience is, except we adapt the controls to mobile and that also meant we created some new features. So when you play, you really feel like playing Siege in your hands, but we have things that make more sense on mobile, and I did touch on session length before, but it was something that I have to bring up because the session length is something we wanted to make it quicker in general.

In reality, it is a mobile platform so you’ll be playing on the bus or a quick break or whatnot, so we kinda want to bring this highly competitive action to a shorter quicker round, and that means speeding things up a bit, you know, getting into the buildings, bringing the spawn closer to the buildings, focusing highly on close-quater combat, also cleaning up the maps a little bit so we can make it easy and more readable when you enter a room the layouts are easy to understand, the props are cleaner.

As well as features that are more mobile exclusive for example we have an audio compass, so when a person or enemy shoots, you can detect where it’s coming from or when there’s footsteps, you can see it’s upstairs or downstairs. This is the reality, because a lot of players don’t play with headphones, and that makes it seem much more approachable in these matches. 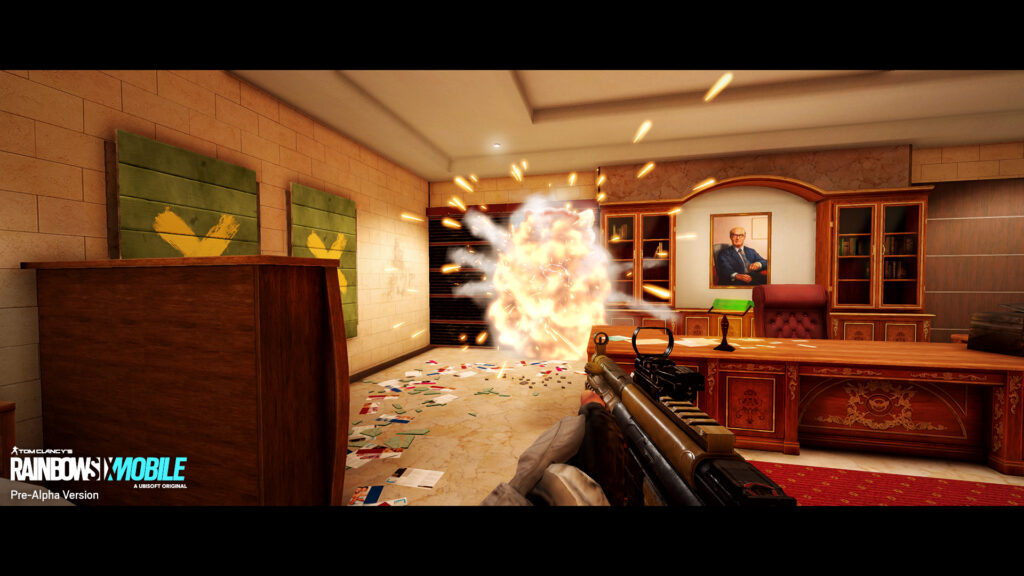 As you can see, Olivier had to keep a lot of Rainbow Six Mobile top secret, however, we can at least be assured that this will be a full Tom Clancy multiplayer experience just as it is on PS4 or PC.

Rainbow Six Mobile will be released sometime later this year for iOS and Android devices. An alpha test for the game will be launching soon so stay tuned to rainbow6mobile.com for the chance to check it out.

In Nightmare Review: The Camera’s The Real Nightmare