The Diablo 2: Resurrected technical alpha has come and gone, giving everyone their first proper feel and look regarding the remaster of the oft revered entry in the series. The demons slumber once more, but that doesn’t mean the developers aren’t hard at work. Armed with new questions, we had Game Producer, Matthew Cederquist and Game Designer, Andre Abrahamian on the dock to answer them.

Presumably, many of you might be wondering, why now? Blizzard’s already announced Diablo 4, after all. Abrahamian does not think the timing is strange in any way, and putting it as such:

With all those factors, it seemed right to get people to experience Diablo 2 all over again, or even for the first time. As such, there’s no plans for a “full remake” at present. Abrahamian talks about the “finding the fun” philosophy at Blizzard, to find the core mechanic that makes a game. Diablo 2 remains relevant, so they decided to keep that authentic gameplay without opting for a full remake with a Diablo 3-esque gameplay style. 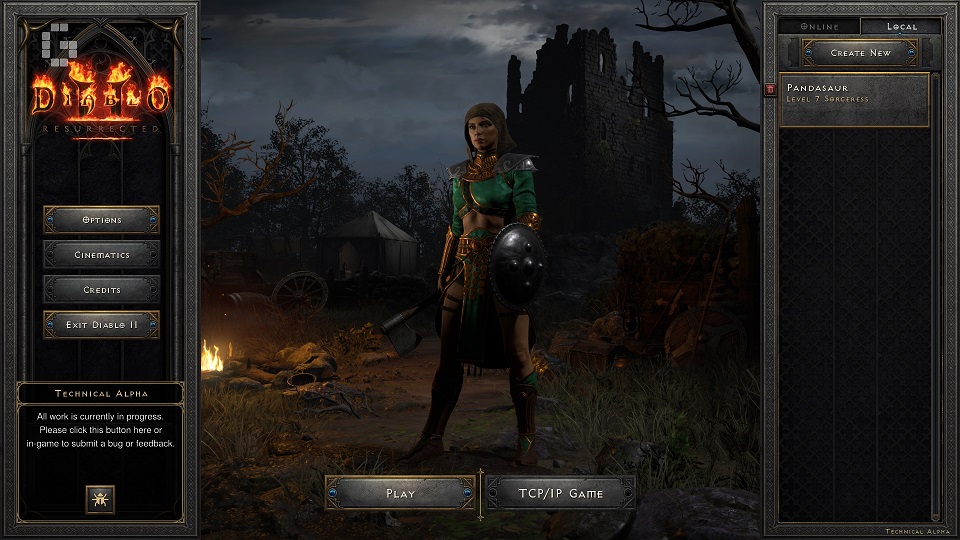 Keeping in mind that Diablo 2‘s death mechanics will see you running back to your corpse, they are working on accessibility while simultaneously not making the game “easier”. They’re collecting feedback from the community, so we’ll see if they’ll add in options pertaining to corpse runs or a manual save system, among others.

Part of the whole remaster meant moving the game to modern Battle.net, with rebuilding of UI behind the scenes. Abrahamian can’t go into detail about the exact modifications, but he does say some things that used to be harder to mod would be easier. Diablo 2 Classic will also still be available, so all its mods will remain in place. Mod support is encouraged for Resurrected, so we’ll see who gets on that. Their focus is on keeping true to the original experience for now.

There will be an update confirming the game’s release with full-cross progression support on currently announced platforms Windows PC, Xbox Series X|S, PS5, Xbox One, PS4 and Nintendo Switch, but there’s nothing specific for Mac right now. Cederquist emphasizes their commitment to make the best experience no matter which platform you play it on, targeting 60FPS for consoles, if you’re concerned about the Switch version of the game. Console users will have a level of auto aim utilizing their controllers, arguably making it easier to use. The PC controls will not be seeing any changes at present, though they are still continuing to take in feedback. Consensus says the controller experience is great, at the very least. They’ll continue improving and finding the sweet spot between aiming and balancing the range, as console users don’t have the luxury of an “unlimited” range of a mouse cursor. They’ve learnt a lot from the console release of Diablo 3.

While you’re able to port your original Diablo 2 save data to Resurrected to skip to the end if you so wish, the current plan doesn’t have new endgame content yet. The fresh experience will be from the online Battle.net ladder changes. Seasons wise, the original ladder system will remain, but they’re considering shortening the length from six months, with the exact period still yet to be determined. Co-op wise, they aren’t revealing precise details either – like not confirming instanced loot – but assures they’ve learnt plenty with regards to anti-cheating measures for online play. While they’re committed to authenticity, some could argue that the strict classic approach could feel outdated for the newer generation. Quality of life features have been added while keeping the game mostly the same, for the original experience appealing to the pioneer generation, while still having the conveniences for the modern day. The availability of Resurrected on consoles itself already widens the audience the game can reach. Classic itself has gotten patches to make the experience better, so the Technical Alpha was primarily to gauge audience reaction, to see if they got the feel of the game right.

One of it was the positive feedback towards the Legacy toggle feature, where you can switch between the old and new graphics at will. It helps them ensure they’ve matched everything as close as they can, while players can enjoy the changes that’s occurred over 20 years. Cederquist points out this was a similar feature they had in Starcraft Remastered that players also enjoyed, so it was definitely something they wanted to add in. The assets for Resurrected have been recreated in 3D, for that modern touch. Cutscenes will be one-to-one recreations of the original cinematics, which we are told, “look amazing”.

The auction house will not be returning at this juncture, and as they work on maintaining every aspect of Diablo 2, there is definitely no Cow Level. Definitely.

Closing off, neither can provide a concrete date for the next beta phase. What’s coming up is a multiplayer test, but for now, they’ll just be working through all the feedback, making considerations regarding design and scope of the game, so once that’s done, in due time, they will surely announce anything else.

Diablo 2: Resurrected will be launching sometime in 2021 pending any delays, so stay tuned for the next testing period and see if you can get in!