Spider-Man Miles Morales is an action-adventure game by Insomniac that originally came out for PlayStation 4 and 5 back in 2020. With that in mind, this review will be focusing more on the game’s performance as a PC port.

You can check out our review on the original Miles Morales here.

As reference, these are the PC specifications for when I played the game: Throughout my swinging session in the city streets of New York City, I had the resolution scaled up to 4K with DLSS on, medium-quality ray-traced shadows, and basically high settings for all ray-tracing options. Both exploring the city and when doing the key missions, the game could achieve 60 fps relatively easily. Miles Morales is compatible with AMD FSR 2.1, Intel XeSS, and Insomniac’s own IGTI, which stands for Insomniac Games Temporal Injection, in addition to NVIDIA DLSS, NVIDIA’s DLAA and Reflex technologies.

IGTI is Insomniac’s technique of creating a full 4K image without rendering every pixel on every single frame. They render slightly more than half the pixels, then “inject” them into a full-sized 4k image.

You can read more about IGTI on PlayStation’s blogpost here.

To put into comparison, I find the DLSS and AMD FSR to be a bit sharper. XeSS and the IGTI does make things look sharp, but that only applies to objects in front of you. Objects further at the back look blurry or jagged if you pay attention to them. Either way, it does not make much difference since we are swinging around too fast to notice any of it.

The Power of Ray-Tracing

Ray Tracing does not disappoint with its gorgeous output but it is not without its flaws, mainly the shadows. The game had massive drops in framerate when turning ray tracing shadows up to high and it just murders everything even with my PC’s specification.

If anything, I highly recommend turning the ray-traced shadows off especially if you are using a mid-range PC. It does not make much of an improvement to quality anyway. Putting the shadows aside, however, the ray-tracing in this game overall is pretty worthwhile. It would not be a far-fetched thing to say that without ray-tracing, you’ll miss out on the charms of the game. Ray-tracing just makes the game feel more alive especially at night when the Christmas decorations are sparkling.

Optimization wise, Spider-Man Miles Morales is as good as the previous Spider-Man PC port. Reaching 60 fps on average with ray-tracing effects turned on would not be a problem. Keep in mind this is when the shadows are turned off and assuming your GPU can support it.

The Controls for Spidey

For anyone that has played Spider-Man Remastered on PC before, the control scheme for Spider-Man Miles Morales plays out just like it. However, I find the controls to be smoother in this game because of Miles’ more acrobatic animations.

Both the DualSense and Xbox Controllers are supported in this game. While both function well, the game leans more towards DualSense since the game supports haptic feedback, adaptive trigger and speaker immersion.

Playing with mouse and keyboard was a decent experience for me. It functions pretty well and the button inputs just nicely. However, having tried all three input devices, I find the DualSense to be more enjoyable to play with. 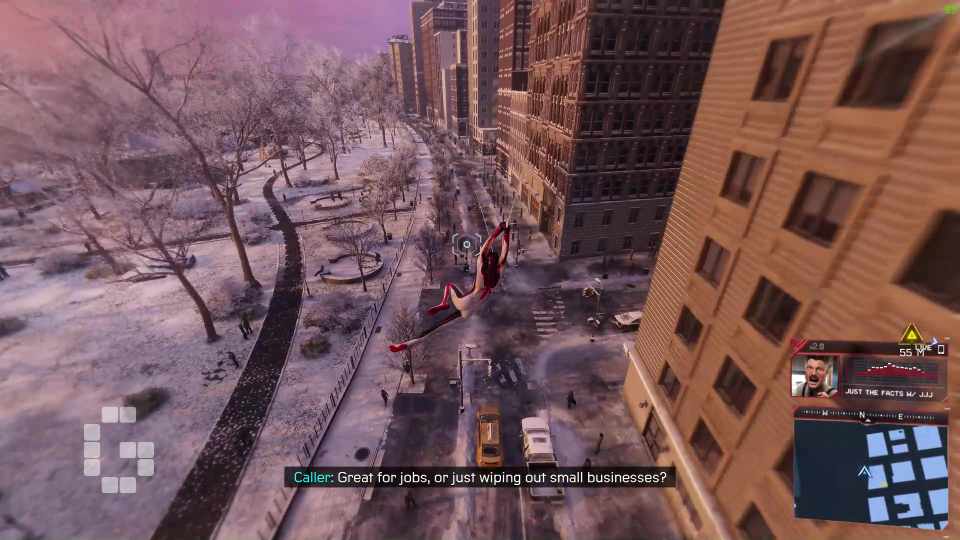 Spider-Man is Accessible to Many

From being able to alter various button interactions to even automatically finishing the QTEs for you. The game also comes with the option for a high contrast shader to help visually impaired players distinguish everything in the game.

While all these options might have just been a rehash from the previous Spider-Man PC port, it is still remarkable for developers to keep the trend of making games accessible to everyone.

However, amazing PC ports are not without its flaws. The game has a few hiccup moments where the camera would sometimes clip far below the ground and the models for the enemies glitch out of control.

That said, throughout my gameplay, that was the only problem that I encountered. I mentioned earlier how PC ports have its flaws but none of them were gamebreaking and in fact, it brought a couple of laughs out.

In one word, I would describe the PC port for Spider-Man Miles Morales as “Fantastic”. With this PC port, Nixxes has once again proven their capabilities and Insomniac undoubtedly put in the extra work to make sure the finished result would both look amazing and play brilliantly. I am just amazed with the variety of graphical settings they offer that I am sure many graphics setting enthusiasts would enjoy customizing it to their heart’s content.

If you have yet to try out this game, I highly suggest you try it out. While it is not as long as the first game, I can assure that you would enjoy every second of it especially while you are waiting for the upcoming Spider Man 2 next year.