Love Live School Idol Festival appears to be celebrating its upcoming ninth anniversary with a Code Geass collaboration. There’s barely any details, if any, so fans of either series will have to subsist on a barebones teaser website for now, found here. 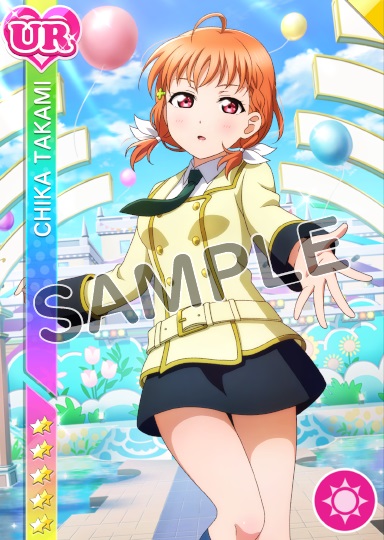 The only other thing confirmed for the Love Live and Code Geass collaboration is that a UR Chika Takami will be available as a reward from the event. She will apparently be a Smile UR, going by the preview. At time of writing, all you can do is share the promotional website on Twitter, Facebook and LINE, with the start date only noted as “soon”.

Taking the Persona collab as precedent, we might be able to assume the remaining Aqours members will also be of UR rarity this run, while the Muse – stylized as μ’s – members would be SSR rarity. You’ll be getting a collaboration story, and of course, playable collab songs. The girls should be available from the collab gacha, as you might expect. Expect the associated social media campaigns to go out closer to the collab event’s availability, which is likely to last for roughly a month.

Until then, stay tuned for the card and track reveals.

Play through Live Shows, read stories about the many interesting and unique characters, join in the events, and create and strengthen your own team of school idols!

Super cute original costumes for the school idols in μ's, Aqours, and more are added regularly.