Live through the timelines

In terms with JRPGs, Live A Live in my opinion is probably one of the most unique gameplay experience that I’ve played through, and here is my review on the game.

The original Live A Live was first developed by Square who now goes by Square Enix, by in 1994 for the super famicon. One of the most interesting feature that Live A Live offers is that players get to play through 7 different characters, with each characters spanning from different time periods.

Well, technically 8 characters if you complete through all 7 chapters but I won’t be going through it because it’s best if you’d experience it by yourselves. Though player won’t have to worry about playing through the game in a strict order because Live A Live let’s you play each of the chapters in any order and you’ll be able to save and exit out of the respective chapters at any given time if you want to play another character’s story.

Live through the Story One of the examples would be in the Near Future Chapter where the story starts off with the main character of the chapter going through his personal backstory in the form of a flashback and self-monologue. In the Prehistory Chapter where human speech as yet to be developed, characters in the chapter “talk” to one another through grunting noises and an icon that appears above their head that expresses what the character is trying explain or what they feel like, so that it lets players somewhat understand what’s going on in that chapter. Another example would be in the Present Day Chapter, where the whole story is structured in like an arcade-themed fighting game style where the story is basically just fights after fights, because of how the plot for that chapter basically just boils down to how the main character wishes to be the strongest fighter in the world. With how different the storytelling for each chapters are, it gives off the illusion as if you’re playing through totally different games, which makes Live A Live such a unique experience to me. While you can see certain comedic tropes scattered across the chapters, I personally didn’t feel like those jokes being thrown around would take away from the more sombre and mature tones that the game tells with the story. In my opinion, those jokes are used in a more light-hearted tone to ease up tension during the quieter moments in the game, though it could be more personal preference. I think that one of the chapter that tells the strongest story is probably the Imperial China Chapter where you play as Shifu, who goes on a search to find a successor to teach his martial arts skills to, so that he may pass on his legacy before he passes on. The strong storytelling really shows in this chapter because instead of Shifu leveling up, it’s his successors who levels up. The more his disciple grow stronger, the more Shifu’s fighting capabilities decline. With how RPGs are set up to show growth and progression of the players, it’s a refreshing experience to see the opposite in the Imperial China Chapter.

There are certain points in the game where it offers the player different paths on how to clear specific chapters, this is prevalent in the Twilight of Edo Japan Chapter where you are given the option to pick between a pacifist route where you have to avoid killing any encounter or choose the other bloodier route where you need to take the lives of 100 people, innocent lives included. Each of the paths will give you a different outcome with their own pros and cons. Live through the Visuals The remake for Live A Live repaints the classic RPG with a new layer of HD-2D paint which is phenomenal. The remake is able to blend in the extremely detailed pixel art of the character sprites with the beautifully modeled 3D objects in the background, which makes it very appealing to the eye. With the game being set in 7 different time periods, each of the vibrant visuals from the chapters all look uniquely distinct between one another. You got the Wild West Chapter where thje scene is set in the barren wastelands of the desert, where it’s got the dirty and yellow filter to it which is typically seen in cowboy movies. On the other end of the spectrum, you get greeted to an entirely different setting in the Distant Future Chapter where you’re put into the narrow and claustrophobic environment of an airship in space, filled with all sort of futuristic technology in clean and sterile rooms. Which is to say that no two chapters look identical to one another and the fact that they are able to show so many varying environments in detail is very impressive. Not only are the settings in Live A Live are distinct, but it also shows in the character designs for the main characters. Another example would be the main character – Akira Tadokoro from the Near Future Chapter is designed by Kazuhiko Shimamoto who worked on the Kamen Rider and Skull Man mangas. Live through the Gameplay The gameplay for each of the chapters feel really unique to one another too, but overall the combat system for Live A Live is “turn-based” combat set on a 7×7 grid. I put in quotation marks on turn-based because the character’s turn is tied to their character’s charge gauge. 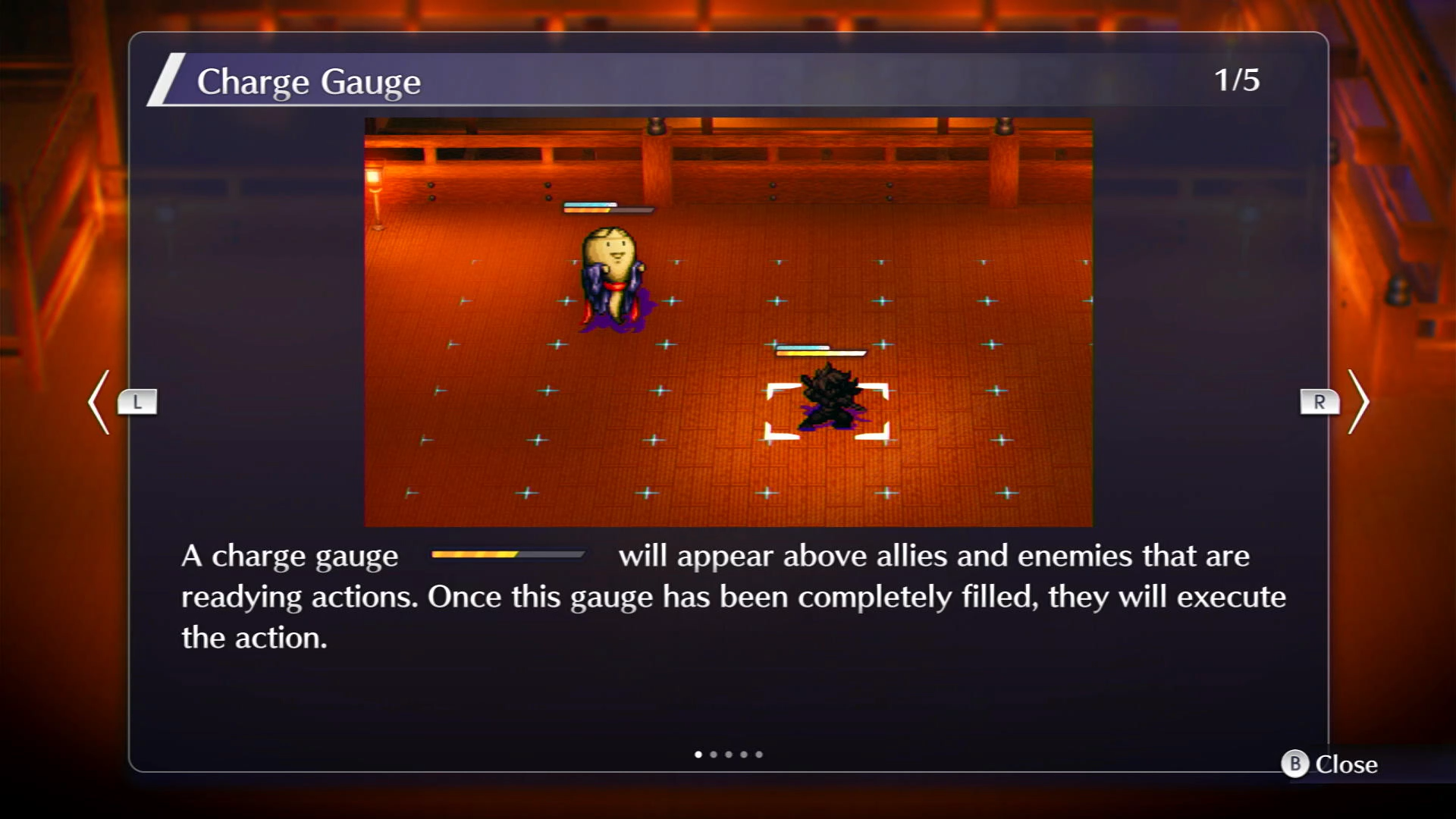 Once your gauge is filled up, you are able to perform an action on the map, whether it’s moving to a different tile or performing an attack, that will also cause the enemy’s gauge to fill up so you have to plan strategically before acting. I would compare the combat to chess because there are some attacks will only work on specific tiles on the grid, like how some moves only damage the tiles around you while some moves only work in a diagonal line. With that in mind, you need to pay attention to how you position your characters on the map so that you can use your moves accordingly. Each of the characters have their own unique playstyle which makes them very distinct between one another, like how Akira from the Near Future Chapter uses psychic abilities and how the Sundown Kid from the Wild West Chapter focuses on more long range attacks since he uses a gun.

The combat can be a little tricky to get used to at first but since you’re able to see the enemies’ resistances and weaknesses and there’s no MP to worry about, you mainly only need to focus on the position of your characters and enemies during combat.

There are also instances where combat can be dependent on certain scenarios which is tied to the story. An example would be in the Present Day Chapter where the gimmick of the main character – Masaru Takahara’s attack is how he is able to copy the move of his enemies after being hit by it. Or how in the Twilight of Edo Japan chapter where you’re given the option to entirely skip combat, other than the mandatory fights, by going through the chapter with the stealth route and Oboromaru’s ability to conceal himself outside of combat. Some of the main characters have abilities that work outside of combat like how Akira from the Near Future Chapter has the ability to read people’s minds and being able to teleport out of combat since he has psychic powers. My main gripe with the gameplay is that it can be quite dated and tedious in comparison to more modern day RPG titles, like with how the 100 kill route would be in the Twilight of Edo Japan Chapter. My struggles continues with that chapter where the minimap/radar that the game gives you doesn’t really offer much information on the map with how minimal the details are shown on it, which makes storming through Ode Castle so frustrating because how big the map is that lead me to being lost multiple times. Live through the Voice Acting Introduced as a new feature in the remake, all of the characters in Live A Live are voiced out, from the main characters and even the NPCs which I can appreciate it a lot since it makes the game more immersive. But while some of the voice acting performances are really good, it can be a very hit-or-miss with some of the accents they try to do have their delivery fall quite flat, more notably in the Twilight of Edo Japan Chapter and the Imperial China Chapter.

Live through the verdict I thoroughly enjoyed my time playing through Live A Live with how they tell the stories for each chapters and how colourful the cast of characters are in the game, mixed in with the beautiful atmospheric environments which is accompanied with a banger soundtrack composed by Yoko Shimomura.

Although I do have my gripes with some of the dated gameplay mechanics as well as the lack of a proper map being displayed. Live A Live has a shorter game time compared to other JRPG titles, which can be either a good thing or a bad thing depending on how you prefer the JRPG genre. If you’d like to know more about Live A Live, do check out the official website here. And if you’re looking for more Live A Live content, do consider checking out our interview with the game’s director Takashi Tokita here.