Fans are upset with Netflix over the recent adaptation of Komi Can’t Communicate, after the service’s subtitle team didn’t translate part of the written text featured in the series.

While it may sound like a minor gripe to an outsider, it’s a fairly big deal: the core plot of Komi Can’t Communicate is that the main character, Shoko Komi, can’t speak normally due to her shyness.

As a result, large parts of the series are built around written text- Komi communicates through a notebook, and many characters’ thoughts are also expressed via text.

It looks like this isn’t a case of the Netflix Komi team forgetting entirely- the series first episode has a pivotal conversation take place entirely via text, so it would have been downright weird to not translate any of it.

But the immediate scene after that, which is supposed to just show Tadano and Komi conversing normally via text, goes entirely untranslated, meaning if you hadn’t read the manga or a cursory understanding of Japanese you’d basically be looking at closeups of a blackboard that say basically nothing. 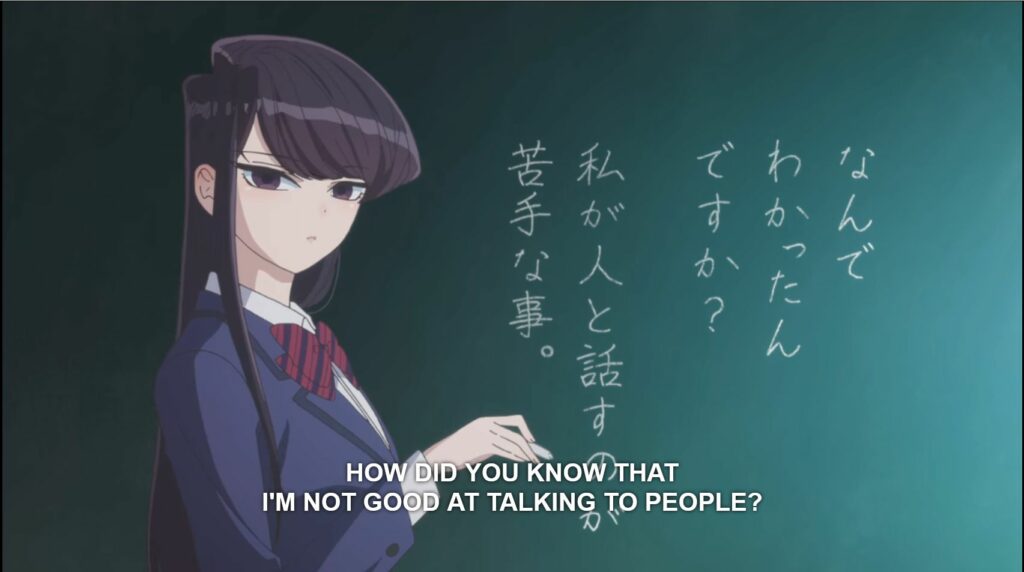 It’s understandable that fans would be upset- production teams wouldn’t have put these shots in if they weren’t important, and anime subbing has advanced enough that many series have their own ways of adding in translations in a non-intrusive way.

The biggest offender, however, comes early in the episode. Male lead Tadano has a shot where the screen just becomes loaded with text, that actually gives hints to who he is- and it’s completely untranslated.

For context, the shot actually mentions his middle school life- something that’s brought up several times in passing and not addressed in detail until much later- that of his “Dark History”, referring to his edgy phase in middle school. How To Sub That Much Text

Fitting in these kinds of translations isn’t exactly groundbreaking, the fansub community has been doing it for years. One Twitter user even showed the aforementioned scenes with their own edits, having the text be next to the Japanese text on the whiteboard.

Holy shit. Its like Netflix didnt even try. pic.twitter.com/wtzprL0z5x

Admittedly, Komi San is a bit of a difficult anime to deal with when it comes to localization. Like I said, it’s an anime where one character communicates almost exclusively via text, and a lot of the show’s appeal is its puns, with characters usually named after the trope they’re based on (Even the main character, Tadano Hitohito, literally means “Ordinary person”).

There’s probably a lot of reasons they can’t do more elaborate subtitling like in the fan example- but considering fans are saying they want it, it would be worth giving a go for a cult classic anime adaptation.

Monopoly Madness is a chaotic new take on the boardgame

Monopoly Madness is a chaotic new take on the boardgame