Kena: Bridge of Spirits Review – An Enchanting Look Through Another World

Play it for the Rots

Kena: Bridge of Spirits is an action-adventure video game developed and published by Ember Lab.

The game is a beautifully crafted adventure that combines classic adventure games with modern game design. Whether surrounded by its creative creature control mechanics or serving up challenging battles, Kena excels in everything it sets out to do. The story follows Kena: Bridge of Spirits is about Kena, a young spirit guide who uses her magical abilities to help the deceased move from the physical world to the spirit world. She is tasked with gathering small spirit companions known as Rots, who help complete tasks and fight against enemies.

Her main goal is to find the mountain shrine to restore the corrupt world around her. Along the way, she meets with a few allies like the hunter Rusu and the young children Beni and Saiya.

The story of Kena, Rusu and the others is told like an interactive cinematic animated movie. It takes pretty obvious inspiration from Pixar movies with its animation however there’s also some homage to old 6th generation adventure games with more cartooney visuals that still have a more serious plot, like Jak and Daxter or Ratchet and Clank. A journey with fun-filled adventure but also with characters you can feel for.

I’ll admit Kena herself can be a little on the bland side however I think the game makes up for that with the world and other characters. Kena more or less serves as a window to explore the fantastical world she lives in which very much sucks you in. Throughout the game, you’ll spend most of your time exploring its vast world and fighting enemies.

Kena’s primary way of attacking is the use her staff to take down foes, and this simple weapon is about as adaptable as they come. Her movements are swift, and the staff’s melee strikes the land with a satisfying wallop. She can evasive roll, block, and perform parry’s to stun her adversaries.

The enemies are a little on the easy side and the staff’s combos can be a little repetitive but they’re not exactly bad either. These battle sequences hum with intensity and produce a fun gameplay loop. As you learn more skills it does become more complex and interesting as you incorporate the new attacks into your move set.

Along the way, Kena learns how to turn her staff into a bow and channel its powerful energy to create bombs with the Rot. Tagging an enemy with a carefully placed bomb is good fun, but the bow is the true star of combat. It feels incredible and is designed with pinpoint precision in mind.

When Kena leaps into the air and pulls back the bowstring, time slows, allowing for an arrow to hit the exact spot you want – whether it’s a small weak zone on an enemy’s chest or a flying behemoth. Landing these shots is an empowering experience, that earns the more cinematic feel to the attack.

Kena also has a spirit bubble, which acts as a shield in battle. Block too much and it will be destroyed, but activate at the right time and she will send off the enemies, leaving them vulnerable for a while. Parry and blocks were always things I had trouble with in similar games however here it’s not too hard to pull off, yet still feels like a challenge to learn them.

The Rots are totally cute!

It’s always a good idea to include an element of cuteness in this game, and for Kena, this comes in the form of the soot-like puffballs that are the Rot. The Rot will follow Kena, help complete tasks and puzzles, give you new powers and there is even one who likes to sit on Kena’s shoulder and point in the direction of the other Rot.

They can lift objects to reveal collectibles and break roots and stones that block the way. Every time I played, I found new ways to use them and felt a greater sense of closeness to them. It’s cool to see how many creative ways these games can stretch the simple systems of the Rots. They can even customize them with little hats!

The Rot plays an excellent supporting role in battle as well. When Kena builds enough determination, she can use Rot for various purposes. They can surround the enemy to distract and attack them for a moment, heal Kena by blooming flowers around the battlefield, or even inject weapons to make powerful special attacks. Whenever your hp is low, you’ll likely need help from the Rots to attack the enemy. This is a level of strategic depth that almost makes the Rot feel almost like an RPG magic system.

In order to upgrade your weapons, you’ll need to find karma and increase the level of the Rots. You earn it through completing tasks like restoring garden patches, clearing corruption from flowers, and drafting enemies. The Rots can be leveled up simply by finding more Rots.

There is also a skill tree that allows Kena to learn new techniques and combos to use when in battle.

Kena’s Spirit Shield is one of the most important things to use in combat. This allows her to reflect incoming damage or even send off enemy attacks if she uses it at the right time. So naturally, improving Kena’s Shield is just as important as it will allow you to counter-attack after successfully making an attempt or taking far less damage when hit.

Kena’s Spirit Bow is the only long-range weapon for her. This allows her to target critical points of enemies by slowing downtime or shooting arrows that pierce right into their bodies. Overall, Spirit Bow does the most damage to flying enemies and far enemies.

Spirits Bomb is the last tool that Kena can use. The bomb allows Kena to throw the balls like gelatin at enemies, stick to them and eventually explode and you can explore it faster by shooting the arrow at it. However, with her Spirit Bomb upgrades, Kena can use multiple bombs at once or discharge them much earlier than before.

Kena can buy upgrades with Karma that allow her to send her attacks with the Rot that she collects during the journey. This attack is devastating and will destroy anything that happens on the part of the recipient.

Rot Ability Upgrades is unlocked with Karma too. The upgrades available are Rot Hammer, Rot Arrow, Rot Bomb, Into the Fray, and Multishot. It’ll totally help you with all the missions. 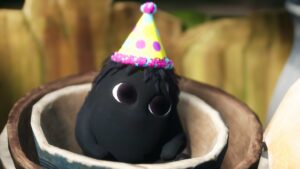 Completing side missions scattered across the game’s world is also where you’ll find the game’s many collectible Items. Some of these will help you upgrade your skills. You are required to find all of a certain collectible in order to gain some of the major rewards of the game.

Each location has Collectables Items, for example, The Villages requires 24 Rots to collect, 21 Hats, or even Spirits Mail. The Graphics and Audio

The graphics of Kena are absolutely gorgeous. The game’s 3D animation in particular is extremely fluid and lifelike, although sometimes her face can look a bit emotionless. Although, is balanced out by the cuteness of the Rots.

The scenery also looks stunning, from the water to the forest and the creatures that need to be defeated.

Like many modern games that want to show off their graphics, Kena also comes with a photo mode. You can zoom into the face of one of the Rots or one of the giant monsters and get them at their best! There are also several filters and poses that can be used to change the color and brightness gradients.

In terms of audio, the music does a good job of adding a serene touch to the mystical forests but can get dramatic when necessary. Every audio option for combat also runs well with all activities in the game. In addition, the voice of the character is good if occasionally a little stiff.

In my opinion, Kena: Bridge of Spirits is one of the best adventure games released this year and a clear highlight of the latest console cycle. Both its exploration and combat components are gradually developed in complexity alongside tools that always have a clear purpose. The elegant mechanical design remains focused on the story of the impactful game, which tells a lighthearted story with some hard-hitting moments.

There are many points of comparison to be made when breaking it all down, but Kena: Bridge of Spirits combines every little influence into its own beautiful mix.

Kena: Bridge of Spirits is available for PS4, PS5, and PC via the Epic Game Store.

Ember Games were kind enough to send us a media kit of the game, check out our unboxing of it to see what was inside.