Leaving the mould of a typical gaming laptop review, the Magicbook 15 that we got from HONOR is a bona fide work laptop that does its job. Sure, it packs an Intel i5-1135G7 processor and Intel Iris Xe graphics card into a compact build, but does it offer anything more magical beyond just the standard work laptop performance?

Before I can answer that in this review, a huge thank you to HONOR for sending us this MagicBook 15. Now, let’s dive into this review! 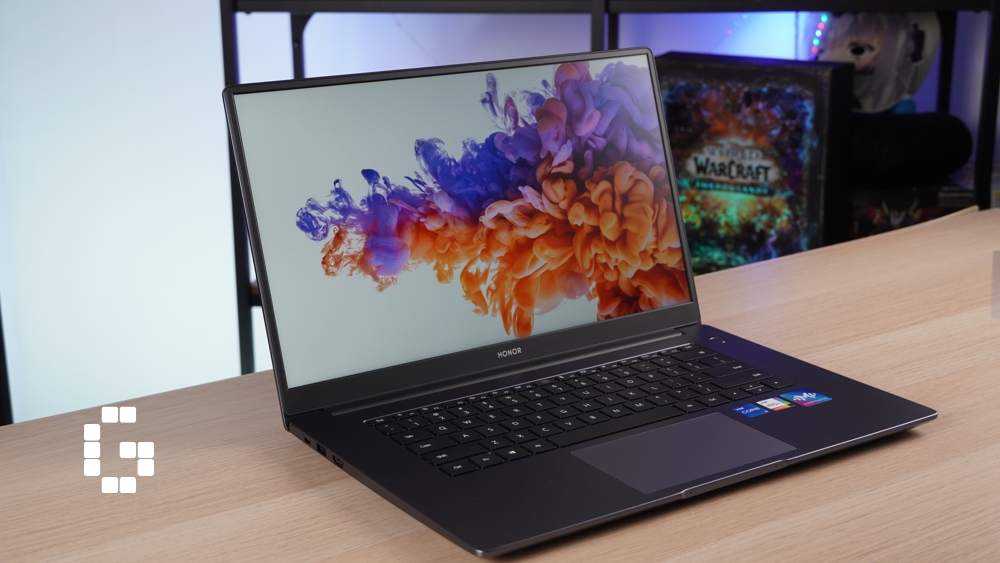 For a work laptop, I like how simple its design is. I can already imagine how eye-catching it would be if your laptop pulsated RGB lights while at work, so having a rather discrete look is great. This is the appearance of gadget that a professional carries around. The HONOR MagicBook 15 that I used for this review is in Space Gray, but there is also the option of Mystic Silver. 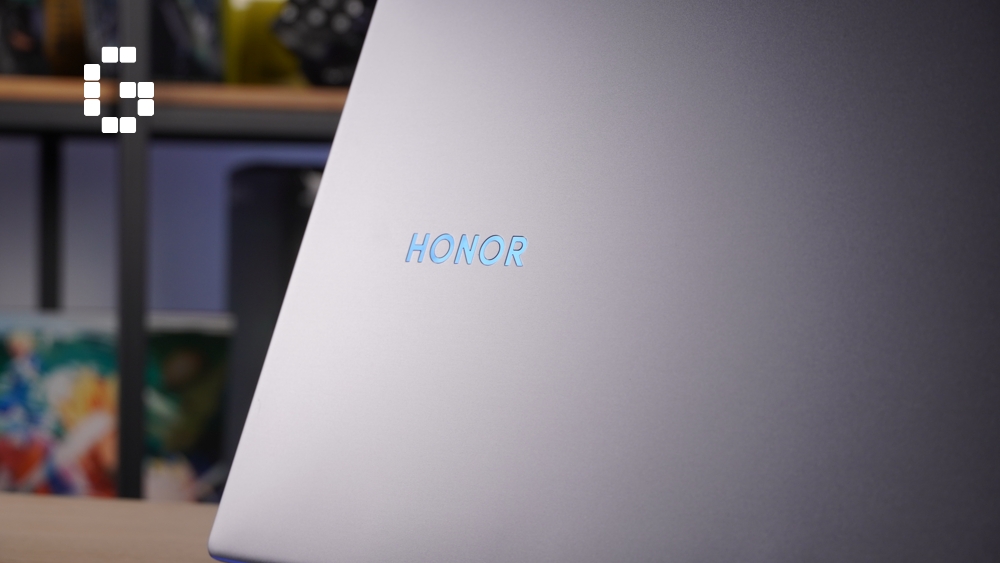 The lid of the laptop is really minimalistic with just the HONOR logo standing out. The logo has an azure blue finish and really pops out visually under dim lighting. 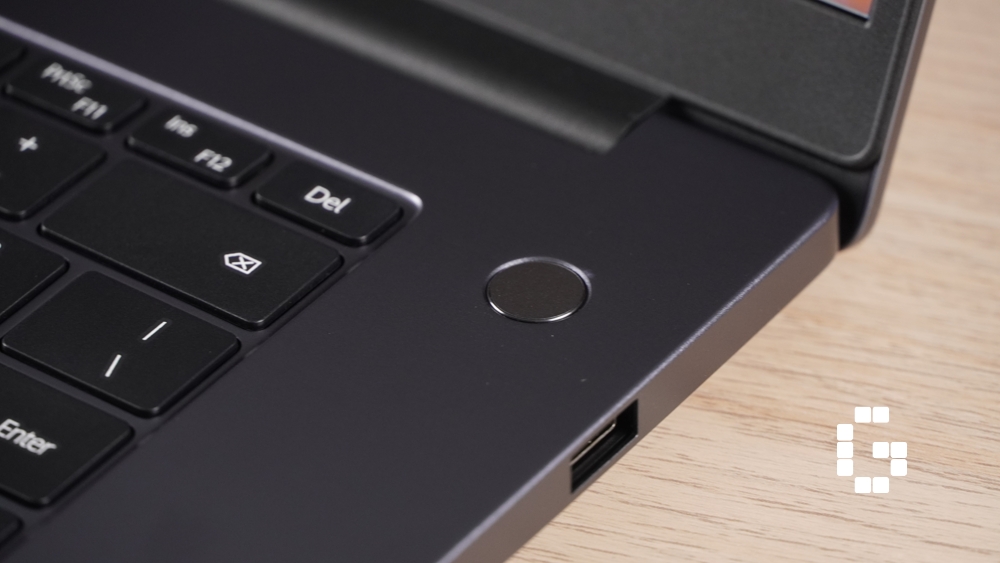 As a laptop with a 15.6-inch screen, it is 357.8 mm wide from side to side, 229.9 mm deep from front to back and has a thickness of 16.9 mm. Not only is it compact, but it is also pretty thin. Coupled with the fact that it weighs 1.56 kg, it is very easy to transport and carry around, even when holding with just one hand.

As for the keyboard, the MagicBook 15 unfortunately lacks any backlight functionality. However, the biggest offender to me was how rough the keys felt. They feel rather uncomfortable to the touch. As a silver lining, the keyboard does have a neat feature in store. The function (Fn) key works by toggling instead of being held down, meaning that it behaves more like the caps lock key instead of the shift key when used in tandem with F1 to F12 keys. Simply press it once and you can use the F1 – F12 shortcuts. 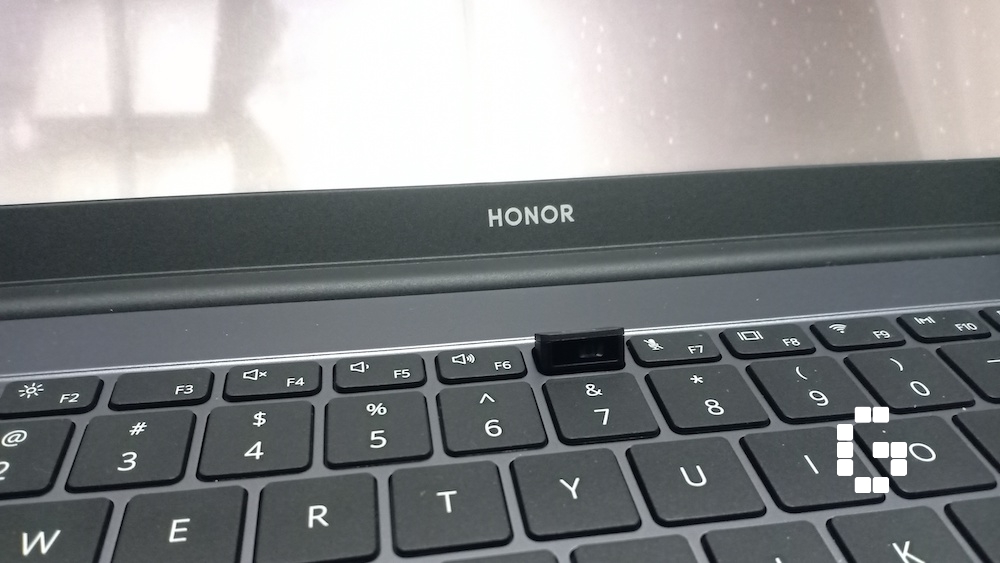 The keyboard also has another trick up its sleeve. In between the F6 and the F7 keys, there is a button. Pressing this button causes the built-in webcam to pop up. While it is a cool feature, I do find the position of the webcam to be less than desirable. There is a reason why most laptops with built-in webcams have them at the top of the display. This is to have the camera at eye level. With the MagicBook 15’s webcam, whoever is video calling you will get a good look at your chin. Then again, it is still better than no webcam at all.

The speakers are situated at the bottom of the laptop. Thankfully, the audio quality is still loud and clear. This is assuming that you are using the laptop on a flat surface like a desk. If you were to use it on a mattress or any surface that absorbs sound well, you would not be able to hear the audio as clearly. 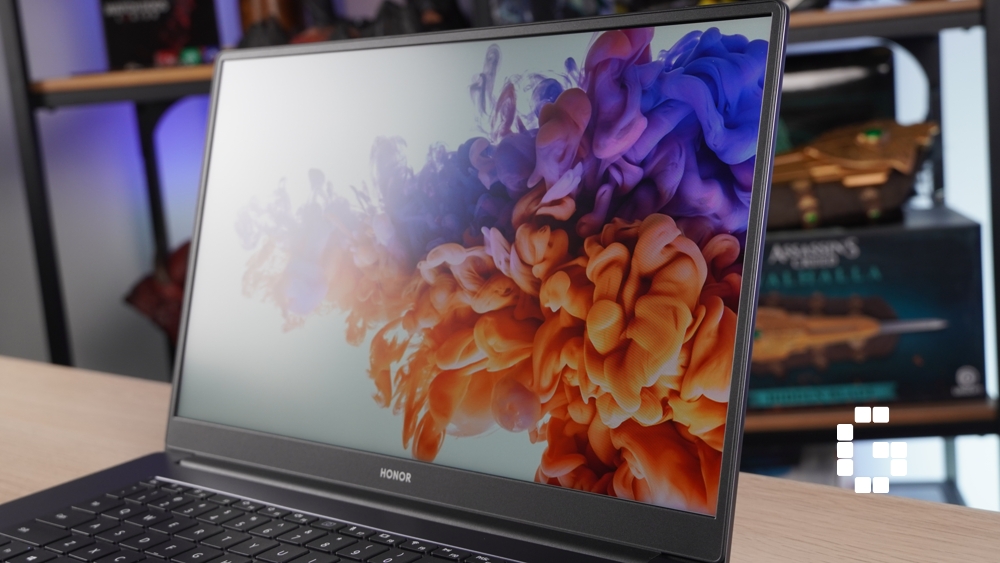 As mentioned earlier, the HONOR MagicBook 15 sports a 15.6-inch screen. It uses an IPS panel that supports 1920 x 1080 resolution and a colour gamut of 100% sRGB. Needless to say, colours are vivid and vibrant on the screen. The bezels are also really thin with an 87% screen-to-body ratio.

Furthermore, HONOR went the extra mile into making sure that the display is easy on the eyes. Not only does the screen have low blue light and flicker-free certifications from TÜV Rheinland, but there are also multiple colour tone options to choose from for a comfortable viewing experience. 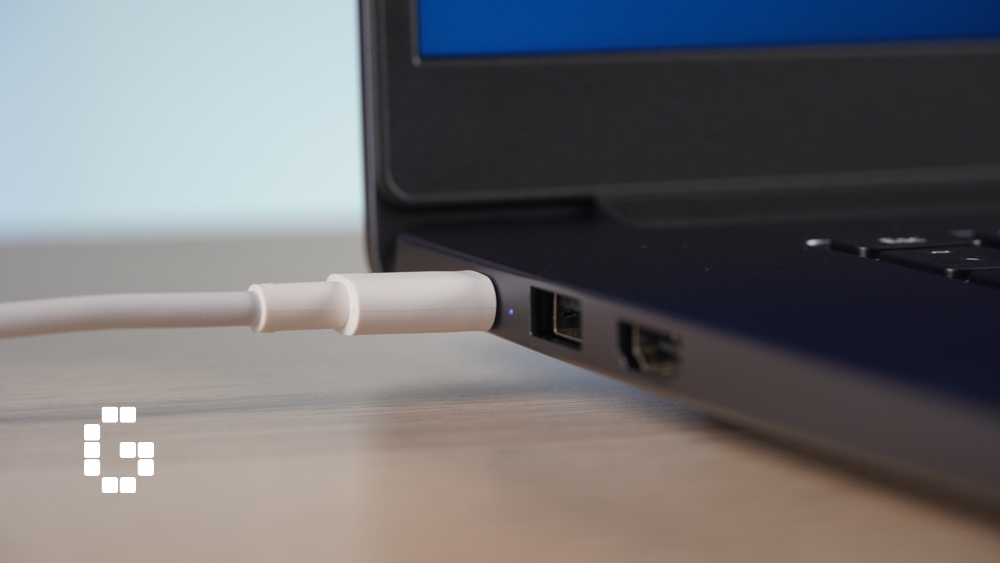 The HONOR MagicBook 15 comes with a 42Wh battery. After an hour of general usage, the power dropped from 30% to 10%. Later, I watched anime for about two hours and the battery level dropped from 94% to 68%. 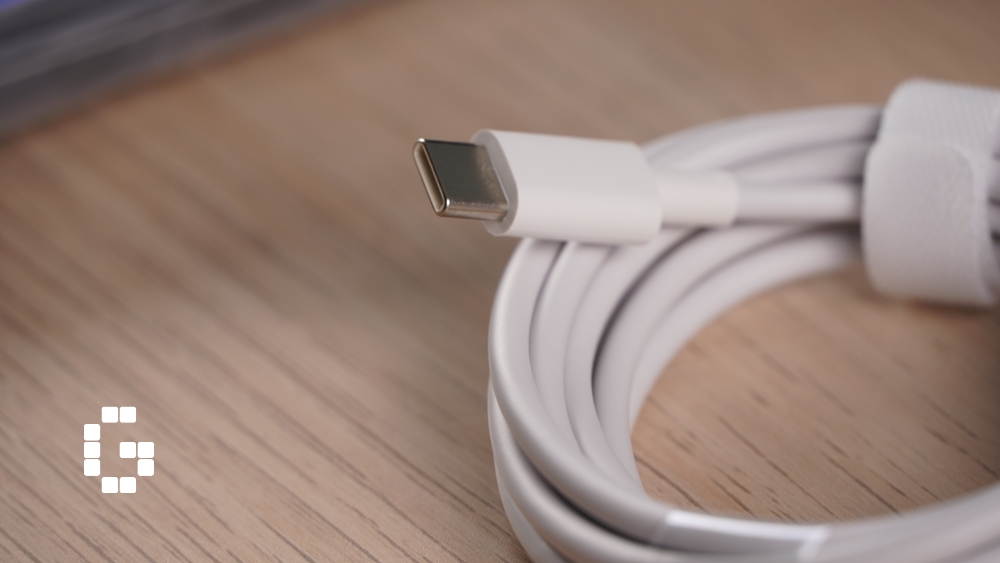 While the battery’s performance itself is decent, charging it is even better. The MagicBook 15’s 65W Type-C fast charger fills the battery up really fast. In one hour, I charged the battery from 12% to full.

The laptop also gives users greater control over how they want to manage the battery life. In the PC Manager software that comes pre-installed, there are options to change the battery charging settings. You can choose to charge the laptop to 70%, 90% or 100%, depending on how you want to preserve the battery life. 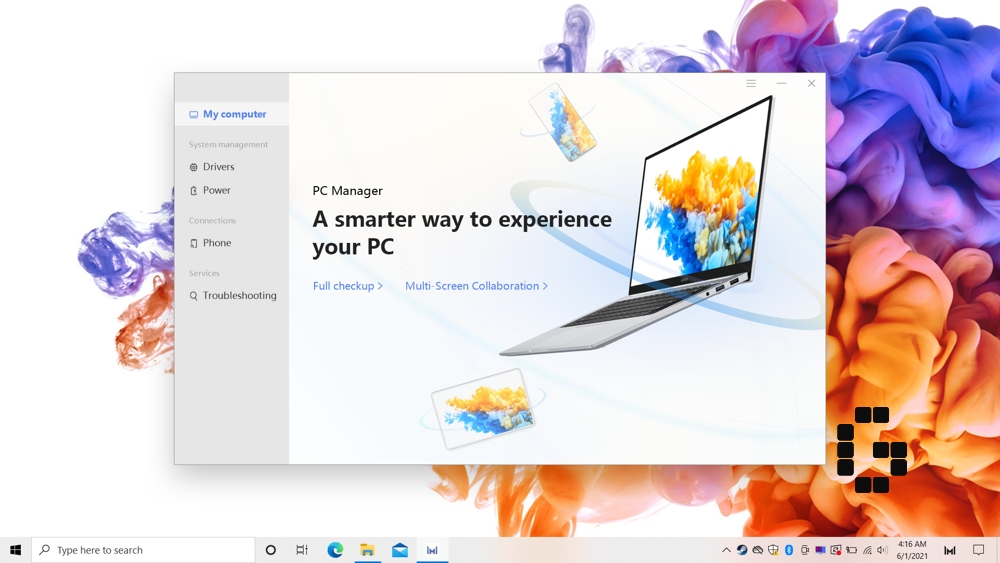 While MSI and ROG gaming laptops have software like Dragon Centre and Armoury Crate to manage their laptop’s performance, the MagicBook 15 has the PC Manager. While it may not let you tweak the laptop’s systems and performance as in-depth as the gaming laptop’s pre-installed software, PC Manager still lets you take control of a lot of aspects of the laptop.

The PC Manager has 2 modes. Sidebar mode gives quick access for users to record videos, take screenshots and also monitor CPU usage and several other details. There is also the window mode, which lets you manage battery settings and also update the driver. If you also use an HONOR smartphone, you are in luck because PC Manager can easily sync and connect with your device. 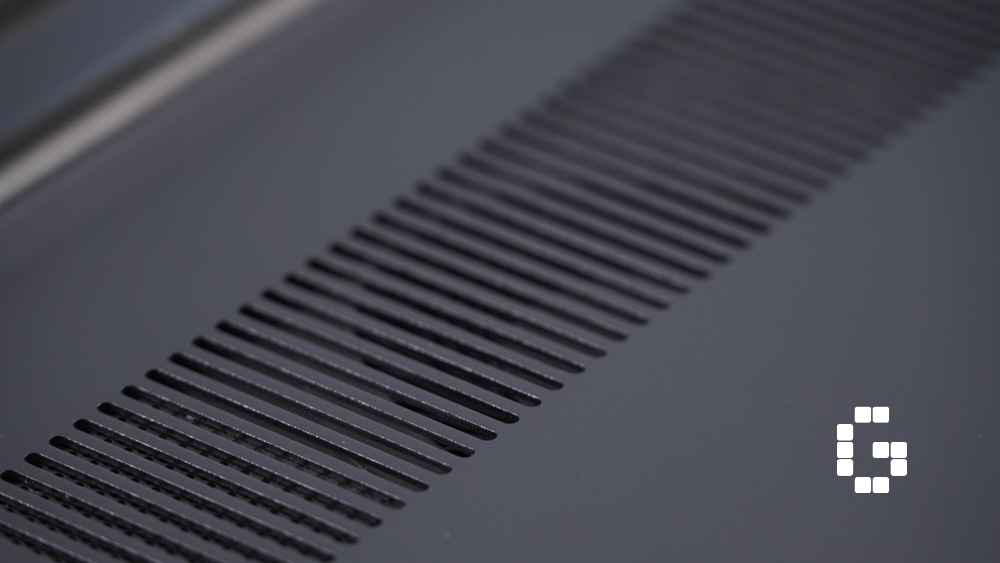 The MagicBook 15 does a pretty good job at staying cool. The only time it ever heat up for me was when I benchmarked the laptop. Thanks to its supersized cooling fan and dual heatpipes, it will stay at comfortable temperatures even when it heats up. As a work laptop, this is pretty much a no-brainer, since I can imagine a lot of people will be using it on their laps.

In a similar vein, the laptop’s fan also remains quiet. It feels quiet enough that I feel comfortable using it at night without disturbing anyone.

The MagicBook 15 boasts an Intel 11th Gen i5-1135G7 CPU and an Intel Iris Xe GPU. Obviously, they are not the most powerful or advanced hardware in the market. Regardless, here are the results of the laptop after benchmarking it on 3DMark: 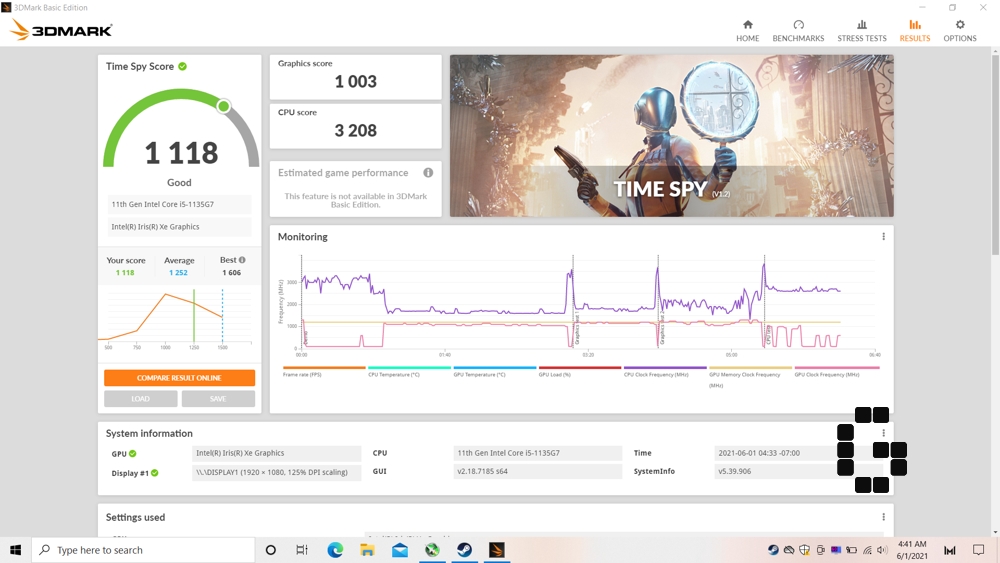 A score like that is somewhat to be expected, considering that 3DMark focuses more on graphics and gaming pretty heavily. Surprisingly, even though the laptop heated up during this test, it still managed to remain between 60°C – 70°C. Not bad for a work laptop. 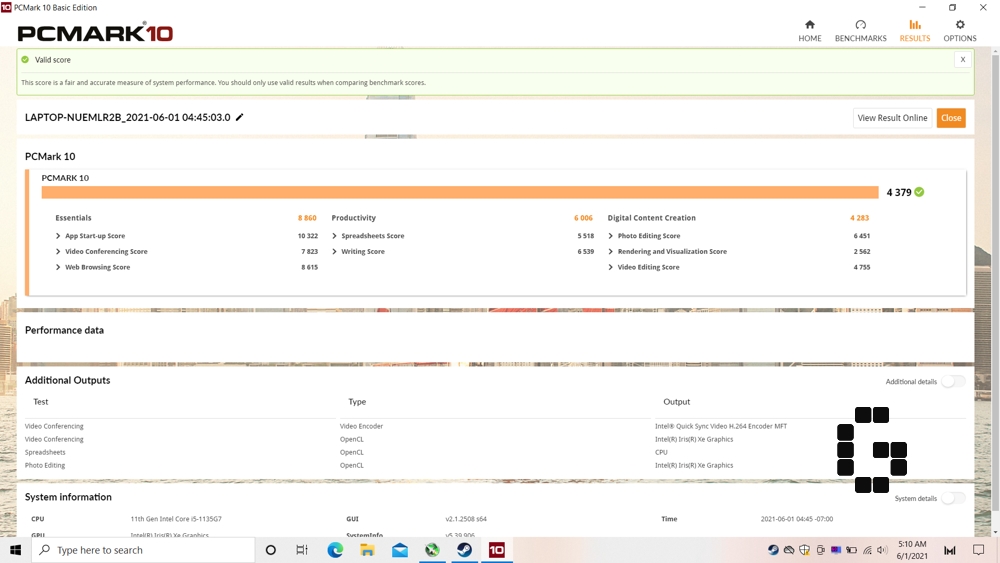 On PCMark 10 test, the laptop performed a lot better, securing a score of 4,379. Since this benchmark is a lot more general compared to 3DMark’s gaming-centric tests, I feel that it represents the MagicBook 15 a lot better.

Time and time again, I mentioned that this is a work laptop and not a gaming laptop. However, I still had to review the gaming capability of the HONOR MagicBook 15. Undoubtedly, someone out there will still use the laptop to run some games.

It goes without saying that the laptop would not survive the latest games with Ray Tracing and incredible graphics. To avoid crashing the laptop, I played Counter-Strike: Global Offensive, DOTA 2 and Payday 2. Note that for all three games, the laptop stayed cool. 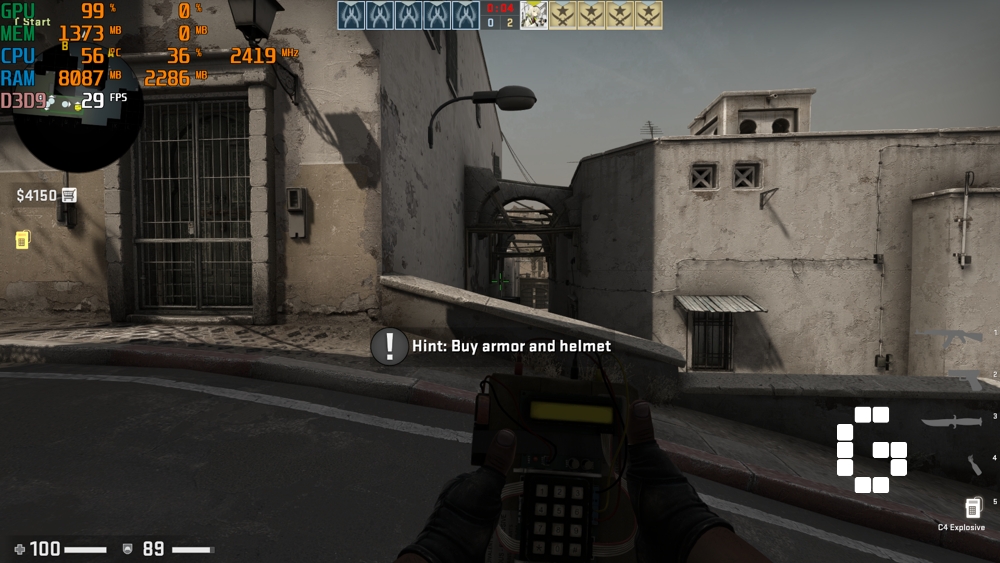 Unfortunately for Counter-Strike: Global Offensive, the laptop has severe trouble running it properly. The game constantly lagged and FPS averaged between 20 to 30. You will not have a good time playing this game on the MagicBook 15. Also, note that I played Counter-Strike: Global Offensive against bots, which has been proven to increase the laptop’s workload. Regardless, it is still recommended not to play this game online. 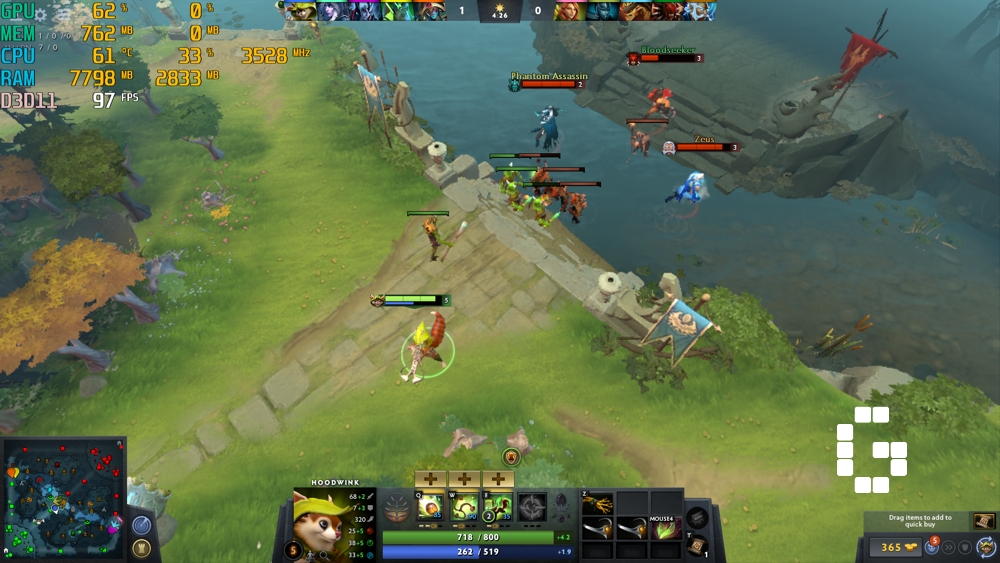 As for DOTA 2, the laptop can run 100 FPS consistently, even in fights and hectic sequences. There is no input lag and no sudden frame drops whatsoever. 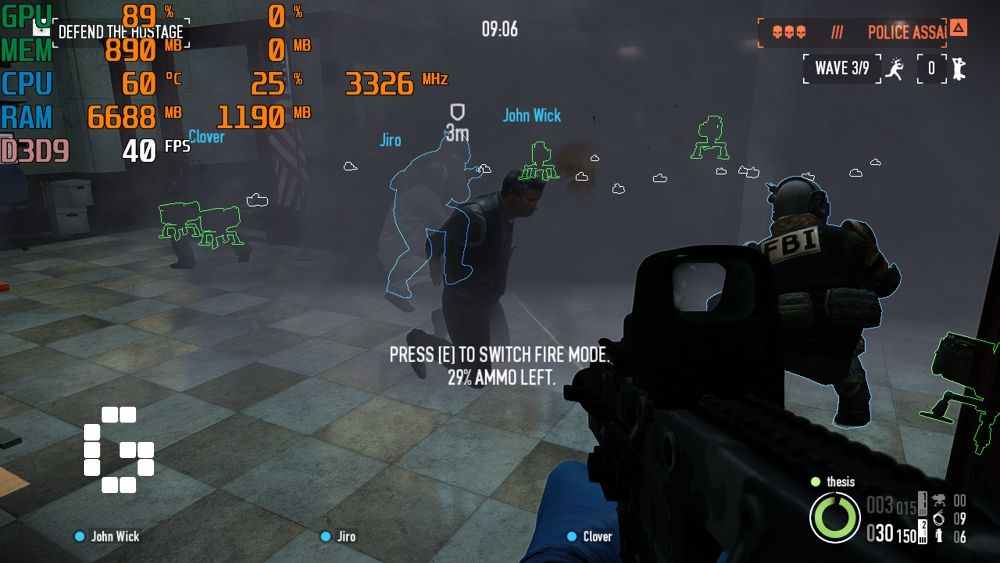 For Payday 2, the MagicBook 15 also performed well. Even on Holdout mode with a lot of enemies, the game maintained a playable 35 – 45 FPS. Even with smoke particles filling the screen, the frame rate did not drop much. 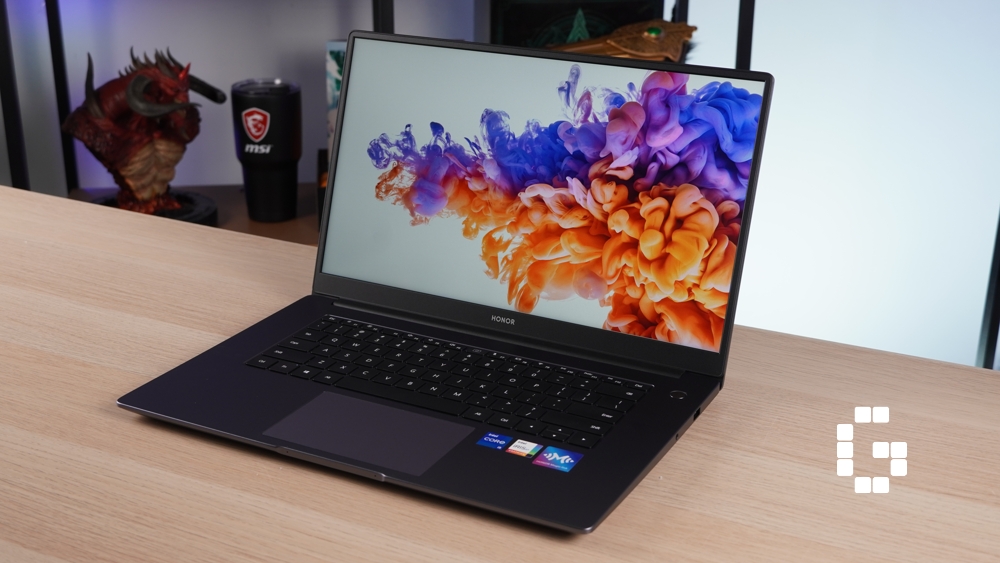 The MagicBook 15 may just seem like any other work laptop at first glance, but it has a couple of tricks up its sleeve. While it is lightweight and easy to carry around, I was pleasantly surprised by how well it regulated its temperature and its silent fan. It has a great display that prioritizes eye comfort and while it may not be able to run the latest and most intensive games, it will be able to fulfill pretty much all the essential tasks that you do on a laptop.

Thus, for a price of RM 3,699, I recommend this laptop for people looking for a light and compact laptop for work purposes and occasionally a bit of light gaming.

To purchase the MagicBook 15, you can head to HONOR’s Lazada and Shopee storefronts. To learn more about the laptop, you can also visit HONOR’s website.