Out of the box, you get this sleek, black machine, emblazoned with the instantly recognizable three-headed green snake logo emblazoned on the lid. It’s made out of aluminum metal for a nice, sturdy body. Thanks to the use of electroplating technology, your beloved laptop will have a greatly reduced chance of scratches. However, this doesn’t exclude fingerprint marks, so you would want to wipe down the machine every now and again. Besides that, the laptop weighs 2.74kg and is 1.9cm thick, making it reasonably easy to carry wherever you need to go.

It would probably go without saying the Pro 17’s keyboard has a Razer Chroma independent backlight module, meaning 16.8 million colours and a variety of lighting effects. The speakers are on the left and right to the keyboard, shifting the keyboard’s position on the body. It’s probably gonna take some time for you to get used to the slightly off keyboard positioning. It’s worth having offset typing (at least until you get used to it) for the speakers, which comes with Dolby Atmos sound effect support and 7.1 surround sound that’s crystal clear, so no external speakers needed. Moving down to the touchpad, it’s a one-piece glass installation that has Microsoft Precision Touch for the multi-touch gesture operations. It functions, nothing especially exceptional about it.

Back up again to the monitor, you have a 17.3-inch screen with 1920 x 1080 resolution and 300Hz refresh rate, and is calibrated for Adobe RGB, for those popping colours. You don’t need to worry much about eye strain either, thanks to the anti-glare matte coating. The screen looks bigger as the Blade Pro 17 utilizes a narrow frame of 6mm, so enjoy those chef’s kiss visuals. 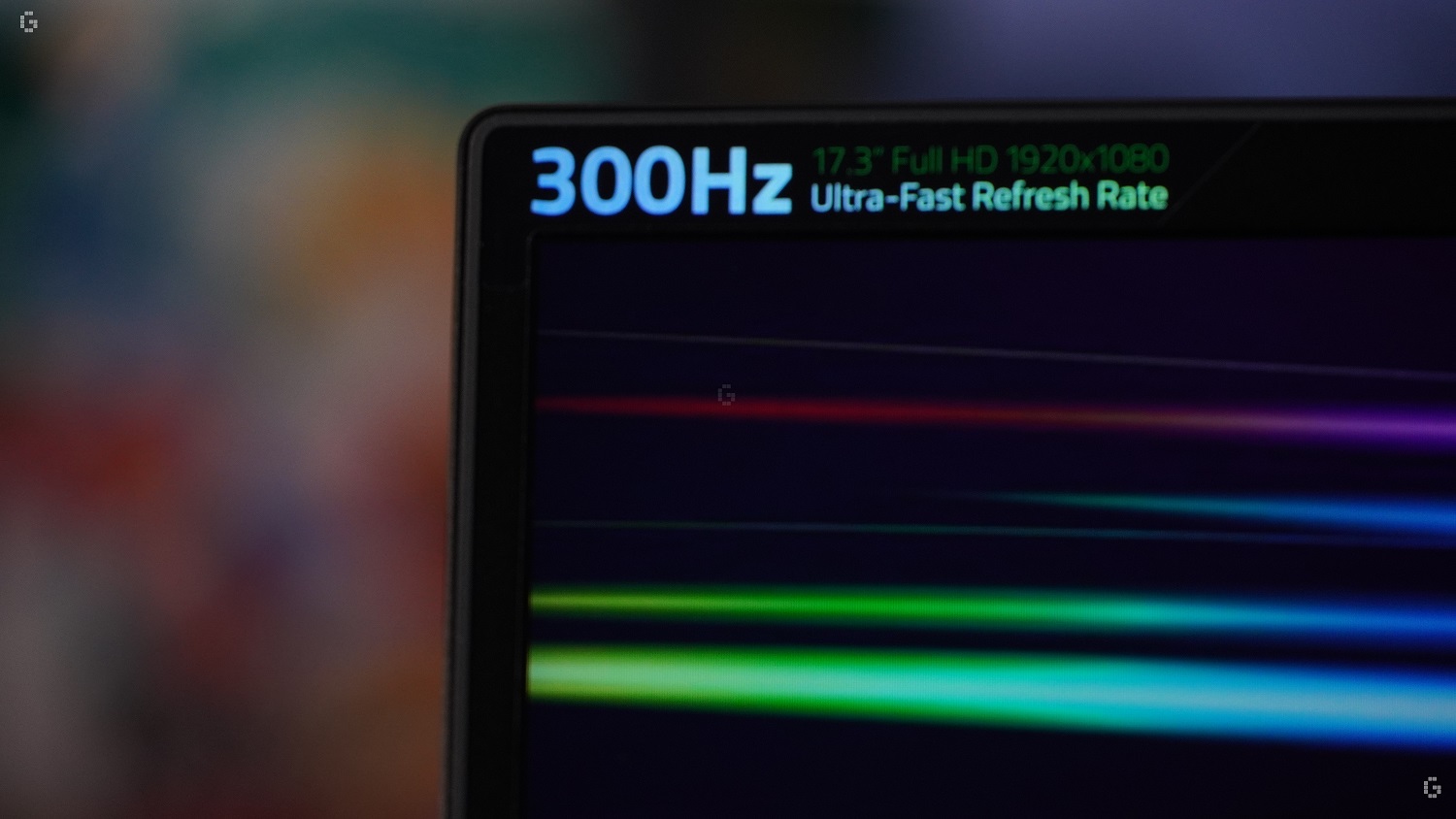 After all that bombastic external looks, it should be matched with powerful hardware to boot. Our model unit is equipped with the NVIDIA GeForce RTX 2080 Super Max-Q graphics card, 10th generation 8-core Intel Core i7 processor, 16GB DDR4 RAM and 512GB PCIe NVMe. The RAM can be up to 64GB, while storage can be up to 2TB. Considering how massive games are these days, you’d probably want a larger configuration for storage. The laptop’s kept cool with dual fans for both the CPU and GPU, as well as an additional small fan on the bottom that works to lower the temperature of the electric board. This fan’s speed can be adjusted via Razer Synapse. Typically, the fan will be almost completely silent, but when you crank it up, then yes, it will sound like your laptop is trying to take off. The machine can still feel hot on the surface, especially on the back, so try to avoid having it on your lap. While this game would probably run on toasters, that doesn’t mean we can’t crank it up to its highest settings and set the FPS cap to 500 FPS. Without recording, hitting 300 FPS or higher is possible. Once the effects start flying, it can go down to a mere 184 FPS for a couple of seconds. Otherwise, you can expect an average of 220 to 240 FPS, and a 300Hz screen will help greatly with that shooting accuracy too. What about a game that requires a certain level of graphic fidelity and reaction speed? In testing Ghostunner, the average FPS is roughly about 140 to 150, with up to 180 FPS possible. You’d want to see what’s coming at you after all, and the Blade Pro 17 will assist in that just fine. Skills not packaged. Read our review to see what we mean. Kojima’s grand project of delivery and sightseeing can take quite the toll on machines, especially with the various PC-added features. Cranking it up to the highest quality to really take in the sights of a post-apocalyptic America, FPS fluctuated between 110 to 150, which is still twice more than the oft-touted 60 FPS baseline. If you wanted to go hog wild with the photo mode and check out every pore of Norman Reedus’ face, you can do so with the Blade Pro 17. With “fancy” options like light and shadow tracking, to mention just one, for this game to be the prettiest it can be, you’d love something that can really carry it, besides actually loading in the world. The Blade Pro 17 falters some here, due to the high demands this game asks for. On high quality, the FPS can maintain 50 to 60, but on Ultra, it dips to 35 to 45. If you want to consistently hit that 60, you’ll have to tune it down just a tad. Check out our review of the game here.

Here are some additional benchmarks: Gaming laptops tend to be bulky and far heavier to make them almost impractical to lug around, despite being, well, a laptop. Razer’s gone simple in design, and its thinness helps it stand out from the crowd. For the most part, if you’re looking for one powerful laptop to play many, if not all, of the most demanding games, the Razer Blade 17 Pro will serve you well.

Learn more about getting your own Blade series here.

Give us some support by subscribing to our Youtube Channel !
Tags: RazerRazer BladeRazer Blade Pro 17
ShareTweetShareSend
Previous Post

Why Netizens Are So Mad About PS5 Dates

Borderlands 3 Designer's Cut Review - Rock You Like A Murdercane