As a die-hard Elphelt stan, the arrival of Happy Chaos in Guilty Gear Strive has left me in a state of mixed reception. Happy Chaos is a cool character- a charismatic charmer with a great title ( “Gunslinging Broken Messiah” is a name so equal parts dumb and cool that only Guilty Gear could pull it off).

It’s been rumored in hushed whispers that a lot of characters in Guilty Gear Strive’s DLCs were “deconfirmations” of returning characters for Strive. It started with Jack-O- who received a massive overhaul from her Xrd mechanics to become more similar to Venom from the same game, using a kit that focused on positioning her servants

Obviously Arc System Works hasn’t said anything about Jack O or Happy Chaos being actual Deconfirms- that’s just bad business sense. But after looking at Happy Chaos and his kit for Strive, it’s hard to not come to the conclusion that, at least for now, we’re not gonna see the gunslinging Valentine join Strive’s roster of characters any time soon. 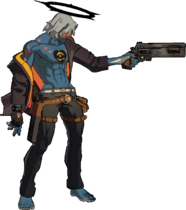 It’s more than just “Chaos uses a gun”. Elphelt’s chief gimmick was her multiple gun stances, with various tools to control space by pinning you down with gunfire. This includes a fast pistol, a slower but more powerful shotgun as well as a slower yet but unblockable sniper rifle.

While Happy Chaos doesn’t have the multiple guns, he does functionally do the same thing. Using the same reticle as Elphelt’s sniper rifle, he can use different stances to give his shots different properties, such as his At The Ready rewarding him for focusing his reticle (similar to Elphelt’s Shotgun getting enhanced range and damage if you wait for her to aim it). Meanwhile, Steady Aim functions near-identicle to the Sniper Rifle, becoming unblockable if you let it train on its target.

He even has an arcing projectile similar to Elphelt’s grenade, which instead of dealing any damage improves his aiming.

Given how Jack-O and Ramlethal were reworked to maintain the spirit of their playstyles but work mechanically different, it’s not too hard to argue that these mechanics could have been a hypothetical Elphelt rework for Strive. That being said, the guns were just a part of what made Elphelt the oppressive force she was in Xrd.

Chaos sports a much more keep away style than Elphelt, since he’s limited by not one, but two resources in his Focus and Bullets. Unlike Elphelt who’s pistol was only limited by its huge recovery frames if you spammed it, Happy Chaos actually needs to manually reload his guns, and has tools to put himself away from the opponent while he does so.

Meanwhile Elphelt actually has a decent amount of pressure tools in close range, giving her way more options than just relying on her gun stances. These include the previously mentioned grenade for setups, as well as other physicla moves like her big normals and Bridal Express, which let her close in while maintaining offensive pressure. Heck, even her main super, Judge Better Half, only worked if you were super close range, so it’s not like she could have hidden across the screen the same way Happy Chaos in theory could.

At the end of the day, there’s no actual method to determining returning characters for Guilty Gear Strive. What we do know is that Season Pass 1 seems entirely focused on getting characters from the story mode into the game (It’s a safe bet that Asuka “That Man” Kreutz is the last fighter), and from there it’s anyone’s guess if we’ll see Elphelt in Season 2, though she has been absent from any data leaks.

It’s not like every character has total ownership of their playstyle either- Zato-1 and Jack O are both puppet characters, summoning additional characters and requiring you to set them both up if you want to use them properly.

One thing’s for certain, Happy Chaos is available now for anyone who really missed Elphelt’s gun stances but wanted a taste of something new. If you’re just a fan of her mechanics, definitely try Happy Chaos out if for an enhanced taste of them. If you’re more to the waifu side, well, I guess there’s always the gacha games?