With a reasonable roster of starting characters, this tier list will help you decide which units to reroll for in My Hero Ultra Impact. If you’re looking for a tier list of every single UR character in the game, click here instead.

In this game, characters are divided into different rarities, with UR being the rarest (and strongest). As such, this tier list is a suggestion of which UR characters to reroll for in My Hero Ultra Impact. This is NOT a tier list of who’s the strongest characters at the moment, but who are the best characters to get for the long term, taking into account future character releases.

Rerolling in My Hero Ultra Impact is very straightforward. Simply clear the tutorial and perform your 10-pull. There is no limit to the number of UR units you get in this 10-pull and you can keep rerolling until you’re satisfied with your pull. Unlike some other gacha games, there is no need to uninstall and redownload My Hero Ultra Impact.

Before we get into this My Hero Ultra Impact reroll tier list, note that if you’re serious on rerolling, an ideal 10-pull will consist of 3 UR characters. This is superior to 2 URs and 1 SR or getting UR Memory Cards.

Even if the 3 URs that you pulled are not top tier, fret not as the vast majority of the UR units at launch are viable even when more URs will be added to the game. Characters in this game are divided into colours (Blue, Red, etc.) and you’ll preferably want to have teams covering all colours, so practically all the characters in this tier list are useful. None of them are bad and even the worst will almost always be superior to SR units. In My Hero Ultra Impact, Blue is considered to be the best colour overall thanks to the amazing units they have. Amongst them is Blue Bakugo, an all-around amazing damage dealer for Blue teams. What makes Bakugo extremely powerful is his Auto Skills. As long as his HP is more than 50%, he’ll have a huge buff to his attack power. Combined with the great support offered by other Blue characters, Bakugo is easily amongst the best units to reroll for in My Hero Ultra Impact. Green Todoroki is an extremely solid character who can stand on his own very well. Todoroki specialises in Freezing and Burning enemies. Being able to Burn enemies is great as it synergises well with Bakugo, whose Plus Ultra Attack deals more damage to Burned enemies. Freeze is an amazing crowd control ability. Not only do Frozen enemies get stunned for 1 turn, the next attack on them is guaranteed to be a critical. Todoroki also Freezes the enemy when he’s at 30% which just makes him a nasty character to face. 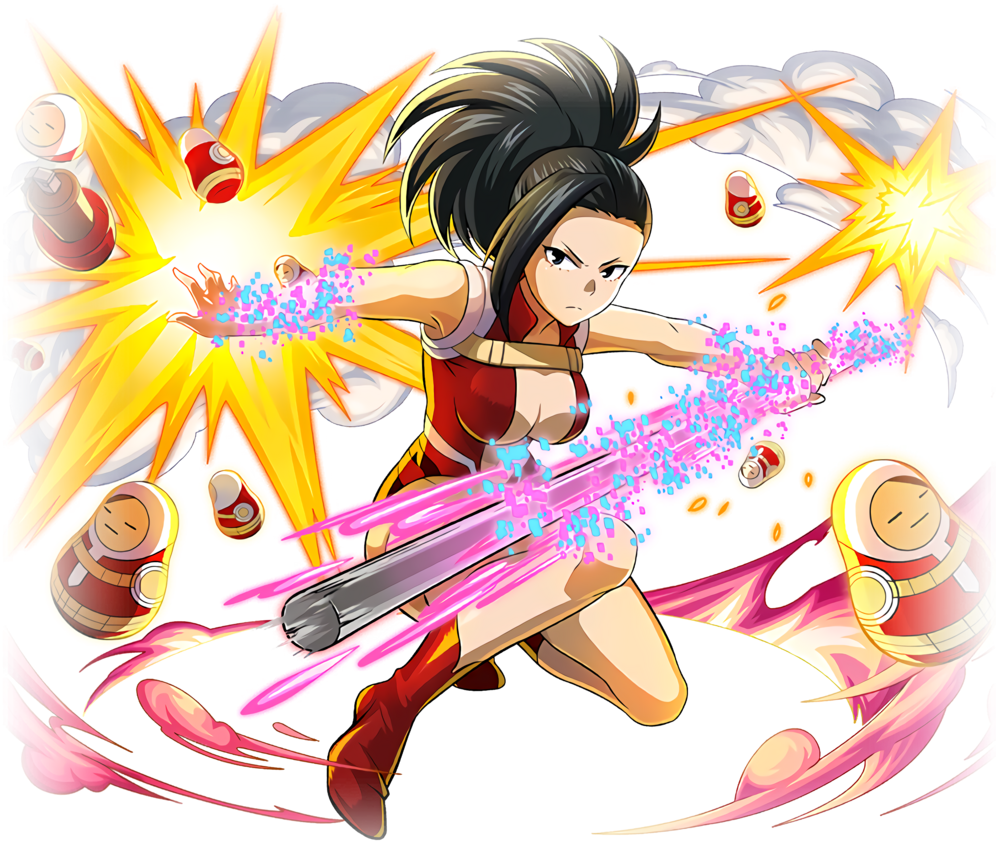 If Blue Bakugo is the gold standard of a damage dealer, then Blue Momo is the gold standard of a support character. The vice president of Class 1-A is the back bone of the Blue team, offering a Power buff to fellow Blue units. Considering that Bakugo already has a monstrous Power stat, Momo’s ranking on this tier is a no-brainer. Furthermore, she can heal the team, which help keeps Bakugo’s HP high enough for his Power buff and also remove status conditions. On top of that, she fills your team’s Plus Ultra gauge faster. What more can you ask for? Green Ochaco is another incredible support-centric character. Like Blue Momo, Green Ochaco provides a Power buff for her fellow Green allies. While she also heals, Ochaco is a more defensive in nature than Momo and excels at keeping the team alive. She can help your team avoid enemy attacks. Besides that, she can also increase your team’s critical rate. She’s also one of the few characters who can counterattack enemies. Red Kirishima is an amazing unit who is built for tanking. Most of his abilities reduce the damage he takes or directs enemy attacks towards him. He can also counter enemies’ normal attacks like Green Ochaco. Above all else, Kirishima also buffs Red units’ Power. It’s worth noting that he’ll be even better in the future once more Red UR units like Overhaul is released in the future. Green Hawks’s kit is centred around speed and evasion. Combined with Green Ochaco, your team will be very hard to kill. Hawks can also buff a single ally to perform normal attacks twice. Overall, this speedy Hero offers great utility in terms of offense and defense. Very annoying to deal with in Arena. Purple All For One
Role: Support
Tages: League of Villains | Villains | Male

This legendary Villain specialises in making your fellow Villains stronger. All For One is a core character in Villain teams (the other being Purple Shigaraki) who can buff Villains’ critical rate. Many of his abilities also reduce cooldown for his and his team’s skills which can lead to devastating effects. All For One will be even better in the future once more Villains are released. Purple Shigaraki is another core unit for Villains thanks to his ability that boosts Villains’ attack power. Buffs aside, Shigaraki deals bonus damage against Pro Heroes on all his skills, making him a natural counter to Pro Heroes. While Purple Shigaraki boosts Villain attack power, Yellow Aizawa does the same for Pro Heroes. Aizawa’s kit is also focused on removing enemies’ buff and preventing them from using skills. While the only other Pro Hero at launch is Hawks, Aizawa will become even better in the future once more Pro Heroes are released. Red Deku is a great damage dealer, but many of his abilities inflict self-damage. You’ll need to be very careful when using him as a result. His Plus Ultra Attack lets him deal more damage the lower his health is, making him a glass cannon. If you really want to use him, be sure to pair him with Red Kirishima who can draw the enemies’ attention away from him.

We hoped you found this reroll tier list for My Hero Ultra Impact useful. We wish you all the best in getting the characters you want! You can also check out our starting team suggestions to determine the team you’d like to put together after rerolling. For a tier list of all UR characters in the game, head here.

New Castlevania Figure of Alucard and Richter Shines in The Night