Gawr Gura Nendoroid Is Adorable And Ready For Preorder

The Gawr Gura Nendoroid , a figure depicting the most subscribed Vtuber in the world, is now available for preorder.

The figure can be preordered via the Good Smile website, and will cost 5900 Yen (MYR 226). Preorders will run until 16th September, and the figure is slated for a July 2022 release. The Gawr Gura Nendoroid includes plenty of options for fans of the Vtuber, such as a removable Shark hood, as well as her trident and mascot, which can be mounted on a separate stand.

On top of that she has multiple face plates to swap out between, with different expressions between them including every anime fan’s weakness- the closed-eyes teeth-baring smile.

The Gawr Gura Nendoroid was originally announced alongside a line of Pop Up Parade figures featuring the other members of Hololive EN, the English speaking branch of the popular Vtuber company. 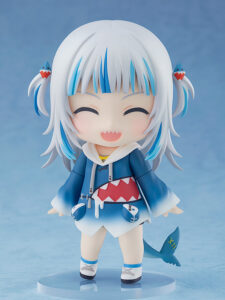 The Most Popular Vtuber

Gawr Gura is undoubtedly the most popular Vtuber under Hololive right now, sitting at 3.18 million YouTube subscribers and overtaking non-Hololive talent Kizuna Ai. She did this in less than a year, having only debuted late 2020.

In fact, she’s popular enough that as of this writing, the Good Smile US website is seemingly having server issues, likely connected to fans trying to purchase the Nendoroid as soon as it’s been announced.