So Strangers of Paradise: Final Fantasy Origin was shown off at E3 last week, to some ridicule. The new protagonist, Jack, is laughably dull, only caring about Chaos and looking like he walked out of a Home Depot. The game’s not particularly visually appealing either, with some comments saying it belongs more in the PS3 lineup than PS5.

Even its limited time Trial was off to bad start, being delayed by 24 hours because the file uploaded to the PSN store ended up being corrupted, so fans with a PS5 couldn’t play it until the problem was fixed.

Despite all that, the game is actually pretty good, and an interesting twist to Final Fantasy’s gameplay. I can’t blame anyone for being turned off by the chain of events that got us here, but Team Ninja’s Nioh-like gameplay meshes really well with the game, creating for an experience that’s like a more action-intensive Final Fantasy 7 Remake.

First off, the combat is undoubtedly going to be referred to as Souls-like, considering it both uses the controller layout of the Souls games and is built around the idea of dying repeatedly. You have checkpoints in the game that reset all enemies and heal you when using them , so it’s understandable that some might draw the comparison.

Despite this the combat is way closer to Nioh specifically, with each of the game’s weapons having a really diverse moveset, which you can use by combining directional inputs with the attack button. Admittedly in the heat of the moment it’s hard to always remember some of these moves exist, but there’s a lot of diversity when you do. For example the Lance is mostly a single-target weapon, but the left-input turns it into a big sweep, letting you easily deal with the forces of Chaos when they gang up on you.

There’s also a lot of cool environmental interactions, since knockback attacks will do bonus damage if you knock them into a wall and fire spells leave lasting burns on the floor if there’s grass.

One of my favorite mechanics in the game’s combat system is the Combo Skills. Essentially each chain of Attack > Attack > Skill can trigger a different skill depending on how many attacks you did prior to it, leading to a really strict yet fluid system. Some skills can only be at certain levels, but just the ability to swap these around feels like it’s going to be way more fun if they add more jobs and skills to the game.

Of course, like all the later Final Fantasy games, Origin also uses its own variant of the Stagger system, called the Break System here. Emptying your opponent’s Break Gauge opens them up to big finishers, and some of your job skills will do more Break damage than others. Thankfully the Break System doesn’t seem as important here as it does in some other games like Final Fantasy XIII, where fights lived and died by whether or not you could trigger a stagger. One of the coolest features in the game is the Soul Shield, which lets you consume some of your Break Gauge in a sort of parry motion. Successfully parrying opens up a lot of gameplay options, since you can go in for a counterattack, reduce chip damage and even gain access to Instant Abilities- consumable spells that are more useful if you’re not already equipping the game’s mage and Black mage jobs.

I really like the Instant Abilities, since they really change up how you think of enemy attacks. Sure, you could just dodge out of the way of a fireball, but learning the timing to parry it with Soul Shield means getting some fireballs for yourself, and even though you’ll probably face tank plenty of them before you get the timing down pat.

You don’t realize how great the Soul Shield is until you get to the Trial’s final boss, Chaos?, who honestly feels like something out of Bloodborne. Soul Shield is an absolute must for dealing with Chaos?, and even though he is incredibly aggressive there’s always a window to parry, even if he’s in the middle of a combo.

Is It Final Fantasy Souls? So it’s important to mention just how much of this game is a souls-like, controls aside. The only thing you lose when you die is your MP bar, which shrinks on every death but never goes below two bars. You can gain this back by doing finishers on enemies, which means you’ll need to make use of the game’s Break system. It’s not a punishment you really notice until the end of the Trial when you fight Chaos?, but you’ll really need your MP to use your various skills.

By and far the most souls-like thing about Final Fantasy Origin is its level design, which uses the whole shortcuts-and-checkpoints school design so that you’re never littered with checkpoints, but you never lose too much progress on death. There’s also lots of side roads to explore, with chests full of loot to get to.

Honestly, I like how they’ve done the Souls-like approach here. It’s not a blatant 1:1 rip-off, but rather they’ve taken the core concepts that make the genre so appealing and worked it into an action game presentation. I’m really glad there’s no stamina bar here for moves, instead the limiting factor is the fact the moves themselves have a long recovery, so you can’t really just mash your way to victory.

Thank goodness they’ve also kept the regenerating potions too, the idea of potions being purely consumable items would have been a huge stinker on the game had they implemented it. You can also top up your potions as a drop, so they’ve definitely cherry-picked the best parts of Souls games to incorporate.

Final Fantasy Origins uses a really cool job system, whereby you can switch between two jobs at any time on the fly. While you can’t usually do them mid-combo, the game tells you that using a Job skill will give you a window where you can cancel into a Job change. It’s a really cool feature, and gives the game some fluidity.

In the trial we only got three Jobs, namely the Mage, Lancer and Swordsman. On top of that you can use the tree-like upgrade system to get their advanced Jobs, Black Mage, Dragoon and Warrior. The Mage/Black Mage are really fun because of their elemental spells, which build in power the longer you charge the skill button before using them. That being said they’re also the hardest to use in a combo, since using the skills activates a radial and you have to be paying attention enough to select the spell you want out of it.

Admittedly though the star of the trial is definitely the Warrior class, with its balanced moveset and hyper armor that lets it not flinch from certain moves. Despite loving the Dragoon class, you really feel the disparity when fighting Chaos?, because the Warrior’s toolkit is just infinitely better for dealing with enemies that don’t give you many opportunities to get a hit in.

Unfortunately the enemy variety in the trial didn’t really give too much of a window for all the jobs to shine. The fire orb enemy is the only enemy that makes you need elemental weaknesses to overcome, and most of the fights rarely ever need you to combo your Job switching for any reason outside of style points.

Still, there’s some really cool synergizing that forces you to level at least one other job. The aforementioned Job Tree lets you get different passive skills, which apply to both Jobs in your lineup. Similarly, you can get Command Skills, which will let you activate buffs regardless of which Job is currently active. 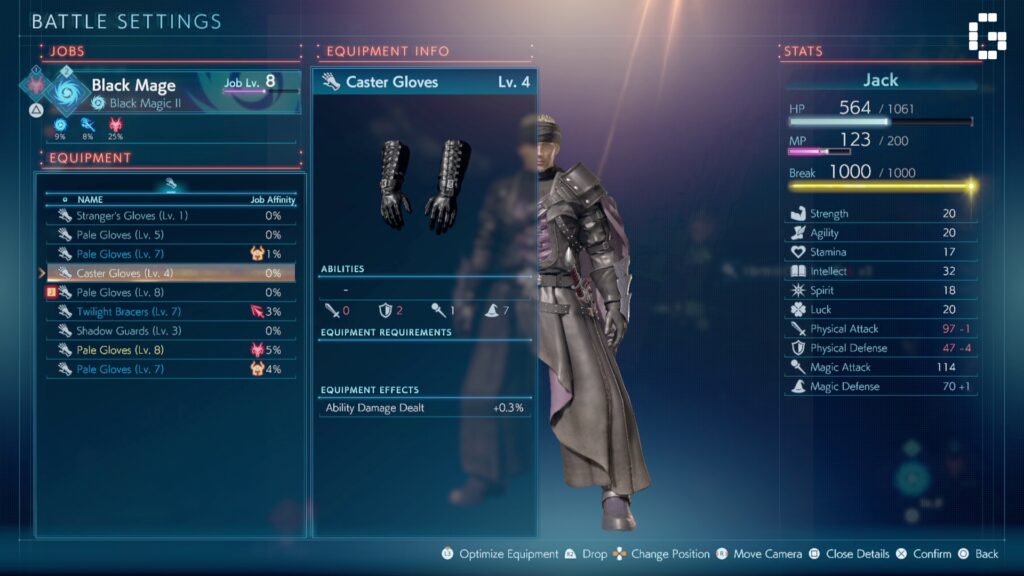 By and far the most disappointing part of the game is its gear system. Just like every other game Final Fantasy Origins uses a  randomized loot system, where gear has different passive skills and levels attached to it.

I always hated this system in games because it just encourages grinding for what feels like no good reason. Worse still the Auto-Equip button is kind of garbage, since it just grabs the highest-level gear and slaps it on your character so if you want to actually have a good build you’ll need to pray the damage boost skills aren’t stuck to a pair of level 2 boots. The other gripe I have with Final Fantasy Origin is something I certainly hope gets fixed by launch. The demo isn’t exactly great, with the game looking more like a HD remaster of a PS3 game than a PS5 title. On top of that the game has multiple performance issues, with the game constantly dropping frames even in Performance mode.

Like I said, It’s probably just an early build of the game- I’m sure Square Enix wouldn’t let a game ship like this, after all. But it should be pointed out that people complaining about the look of the game are totally valid, especially when Intergrade just came out and looks amazing. All in all, Final Fantasy Origin looks like a really good twist on the Final Fantasy formula. Mechanically, it looks like a lot of thought went into the game, creating a perfect blend of Final Fantasy spectacle with a new dash of more souls-like combat that’s not content to just be a clone.

Still, it’s not without its flaws, and the idea that the incredibly boring Jack is somehow the Warrior of Light from Final Fantasy 1 is sure to ruffle a few feathers. Based on the dialogue in the demo though the game has at least one curve ball in store, so I would definitely give the game a chance if nothing else on Square Enix’s goodwill alone.