After I made an appeal to get into the Endless Dungeon ‘First Run’ OpenDev session in my rogue-genre demo blitz, I did indeed receive blessed access to try out the game. I honestly didn’t know much of the game prior to jumping into this early access / demo build. All I knew was that it was another game apparently following up to another that I really liked.

With the waxing lyrical done, let’s see what this build has to offer as I successfully die repeatedly.

For video, some of the things that stood out to me include:

There’s aim assist for both the gamepad and keyboard / mouse user, which is quite nice. I’m not sure how much it works though, since this is an early build after all. I will appreciate tooltips about the settings for launch so that I know what I’m trying to tweak or turn off.

Unlike its predecessor Dungeon of the Endless, Endless Dungeon has made the move to 3D models. It’s reminiscent of Risk of Rain‘s progression, which isn’t bad on its own. However, I think there are some problems that come with this jump for Endless, unfortunately.

One of it being the effects might get too busy. I felt this way a few times, as the monsters swarm in and be kinda messy more so when the room I’m in isn’t well lighted. Heck, even in a lighted room, it doesn’t seem all that bright. Aiming assist aside, a crosshair might be good for more “precise” weapons.

Building on resource nodes is pretty easy. Just find the relevant slot in a lighted room and you can pick one of three options to slot in place. It’s the turret / module building that stands to be improved further. Sometimes, the nodes are hidden behind an environmental object, so a more visible highlight option would be appreciated. Additionally, I feel that the building menu might be better off as an actual wheel as I realize I built a couple of things by mistake because I moused over the incorrect highlighted building.

I do like the overall artstyle though. It’ll just need more adjustments to be more easily parsed.

Endless Dungeon has you progress through rooms, one layer of Pandora’s Box at a time. Your primary concern will be to protect your Crystal and bring it over to a new slot to unlock doors or move on to a new area. Unlike Dungeon of the Endless, your characters don’t need to actually carry the Crystal this time as it’s now a little bot that is decently fast; just be sure to escort it or you die when it dies too.

My primary concern about the jump to 3D is that the turrets / modules have their own radius. This on its own is not a bad thing, but this being procedurally generated, it means that there will be points where you can’t sufficiently protect an objective. This makes the early game feel harder than it needs to be, further compounded by the low resource gain. 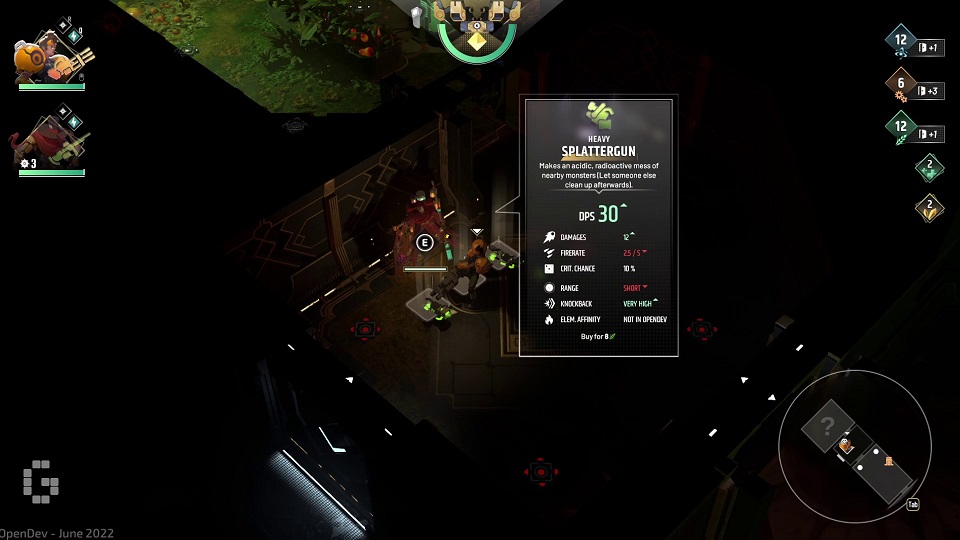 The monster spawns are from fixed areas now, but that hardly makes it “easier”. The tactical aspect will definitely be enjoyable, merely me feeling limited by the constraints of this first run build. The destructible pots only very slightly ease the resource strain. Heroes don’t get healed to full at the end of a wave, unlike its predecessor, so having enough Medkits is another problem. Some rooms may start out Dark, and you’ll need to use Dust to power it up. Dust is a rare resource here, so lighting it all up is not really an option. You will need to power up a room in order to install anything, hence its importance. The Crystal itself can be upgraded if you find Dust Shards. It will move over to mine the shard, upon which monsters will continuously stream in until it returns to its slot. It definitely can get really brutal. You can teleport to the Crystal instantly in an emergency, at least.

Heroes can equip one “device” each which basically work like passive skills. The Merchant is still around, allowing you to trade resources for one of their wares. The device equipping was buggy for me since my other hero without a device couldn’t equip one, but whatever. Upgrading heroes must be done through a specific station this time, with incremental costs and only one trait at a time. Researching new modules or upgrades are likewise still available, taking real-time instead of number of doors (from Dungeon of the Endless) and needing you to protect it as the research completes. For the monsters themselves, besides spilling out of pre-designated nests, they can also spawn after a certain amount of time. You can go many rooms without having any spawns until you get the warning of an upcoming wave. In Dungeon of the Endless, enemies can spawn from any Dark room whenever you open doors. The change in Endless Dungeon is… fine, I suppose. It’s easier to plan around and definitely more appreciated should the resource gain remain this low. Incidentally, aside from the resource structures, the turrets and modules can be repaired instead of getting destroyed and needing full replacement, which is nice.

There will be elemental effects and encourages different weapon types against different enemies, but it’s hard to tell its effect when equipment is still quite scarce, though of course it could just be me being very unlucky. A team only has 3 maximum in this game, down from 4 from Dungeon of the Endless. You can swap between the heroes quite easily and command the companion to stay in place or follow you. The Crystal can also tag along with you when it removes itself from the socket but considering a roving Crystal means endless monster waves, that sounds like a bad idea. The companion AI doesn’t seem to use their skills at this stage either. Last but not least, there’s a hub area you return to each time you die. You can talk to the NPCs and presumably other playable characters here, where I suppose you would eventually be able to pick up side quests and / or progress the story, with any relevant permanent upgrades purchasable here. FROM DUNGEON TO ENDLESS

To wit, there’s quite a few changes from the original game, including:

If there’s more, I can’t remember them off-hand. This list is by no means suggesting the older game was “better”; I do think a new game / sequel should strive to improve on its predecessor after all. I personally prefer Dungeon of the Endless‘ systems, but also I can’t fully pass judgment on an early build.

Right now, Endless Dungeon feels quite punishing to me, and without any options to tweak so that I can progress further to see more of the game, I am unfortunately blocked by the skill and luck factors. That said, I can’t pass up on roguelikes. Once more of the systems get locked in place and I actually get more options to play around with, I’ll see how many more times yet I’ll enjoy dying yet.

I’ll look forward to further updates to go further down that rabbit hole.